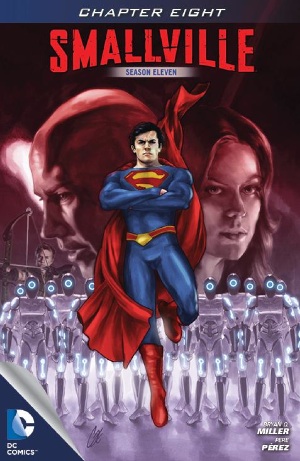 Click to enlarge
Lois's request of her father, General Sam Lane, to stand down in his assault on Superman is overridden by the General's orders. Clark is confused - he thought the General knew who he was and that they were allies. During the assault, a helicopter crashes to the ground, nearly killing Lois. Superman saves her. The General takes note.

Lex Luthor has determined that his "hallucinations" are his way of coping with having Tess's consciousness actually residing alongside his own in his brain, a result of her having injected him with the memory toxin. (Seriously. Or something. It's not wholly clear.) He thinks he knows how to fix the "problem," and is setting up to test his procedure on Hank Henshaw.

Story - 5: No time this week for a blow by blow, kids - maybe we can get into some of it in Comments.

Overall impression this week is this: "Is it too much to ask for this kind of issue every week?" Good action and intriguing (if confusing) revisitation of the matter of "Sam Lane knows" (frankly, I'm not sure what to think of this, so I will reserve judgment until it's made clear whether he has or has not known all this time that Clark is The Blur/Superman - I have opinions, to be sure). The direction they're taking with the Tess hallucination is not especially promising, though I think I can say it's an idea I've never encountered before.

Let me qualify that: the emergence of a multiple identity is interesting, and therefore promising, as is basing it on some kind of imprinting on the user of the memory toxin, but the suggestion that it is truly Tess - her actual consciousness - is not. It's dumb, and in a way that you could even accept if you knew it was a choice made at least partly because they had to write something for the actress who is still on contract for another season. Or whatever.

Here it's just, so far, baldly supernatural without any sense of mystery. Therefore boring. I mean, isn't this just an imperfect "Transference" minus the incredible Kryptonian technology? And wasn't that technology pretty much a deus ex machina way to do the transference in the first place the first time around? I don't know - maybe I'm alone in this, but I tend not to have to much use for plot devices that involve removing consciousness from the brain and yet somehow keep it constant. Unless they put Hank's brain in a drone and not just his "mind," I predict much gnashing of teeth in reviews to come.

Other than that, I actually kind of feel like maybe we're now finally seeing a Superman that makes sense to me from the show I watched a few times over. I wish I had time today to get into this - will make room next review if it doesn't come up in Comments over the week.

It also occurs to me that the only other outing this season I've genuinely enjoyed was the all-action chapter 6, similar to this issue that it was longer on, well, action than it was on drama.

This issue is now the benchmark for the season.

Art - 5: Name labels, name labels - oy, the name labels. Who decides on those things, anyway? Do you not find them even a tad insulting? That said, this might be the most compellingly illustrated issue to date. Even without a feature shot of some breathtaking sunset or other cosmic phenomenon. Colors especially, as ever.