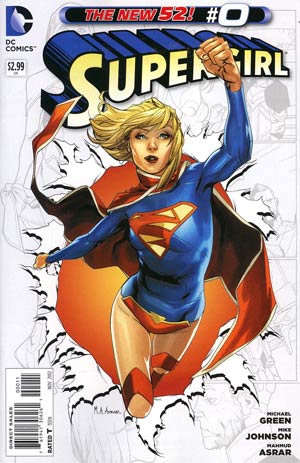 "The End of the Beginning"

Click to enlarge
Our story begins in the remote laboratory of Zor-El. His daughter Kara is in what appears to be a suspended animation tank as he ponders the eminent destruction of Krypton that his brother Jor-El predicted. Upon Kara's awakening, Zor-El takes her to her mother while Zor must meet with the Kryptonian High Council. They are extremely pleased with the generators he has surrounding the exterior of Argo City's shielded dome. The councilmen are unaware of their true purpose.

As Kara is visiting her Uncle Jor-El, Aunt Lara and infant cousin Kal-El, she learns of the falling out her father had had with his brother. Jor-El warned Zor-El that his experiments would not be accepted by Krypton's High Council. Kara suddenly remembers that her father had said to her that his lab was away from prying eyes, something that worries Jor-El. He now wishes to make urgent contact with his older sibling. Can he do it before all of Krypton is destroyed?

Zor-El's family problems don't seem to be limited to his brother. It seems he's been keeping his wife Alura and daughter Kara in the dark about his work and Krypton's fate in order to not panic them. However, as more quakes rock the alien world, Zor-El shows Kara what's hidden in one of the generator rooms near Argo City's dome. It is an escape pod with the costume emblazoned with the family crest of the House of El, something Kara cannot wear until she passes her trials. However, Zor-El allows her to have it. As Kara tries on the suit, Alura sees the evidence of Zor-el's experiments on their daughter in his lab. However, before she can confront him, she receives a cryptic message from Superboy, who seems to appear from nowhere.

"It's not too late to say goodbye to Kara."

Kara is slowly losing consciousness as a result of her father's tests on her. She vainly protests what he has done. Zor-El places her inert, costumed form into the escape pod. He wonders what Jor-El would do as he records a message for Kara. Zor-El believes he has redeemed himself after the work he did on the Worldkillers by saving Kara. Yet, Alura does not see it this way. She has shot her husband before urging her daughter to wake up. Suddenly, another quake occurs. The wounded Zor-El initiates the launch sequence. Alura pounds vainly hoping to free Kara, but it is too late. The pod has taken flight into space just as Krypton explodes with Zor-El's last words being, "Our child is safe now."

Story - 4: We are left with some unanswered questions with this issue. Will we learn more of Zor-El's involvement with the Worldkillers? Will Kara learn that her mother shot her father? Does Superboy's appearance mean I'll have to read his awful book to understand his purpose in the story? I hope that the answer to that last one is no. Anyway, Supergirl #0 was fun to read, and I'm looking forward to discovering more about these dangling plot threads as this title continues.

The revelation that Alura shot Zor-El leaves me on the fence a bit. It was decent enough. Yet, a part of me expected it. Perhaps making Kara responsible somehow would have worked better and had more of an impact on her as a character and the reader as well. Still, it was a well done effort nonetheless, and I enjoyed it immensely.

This particular comic's story shows off the character pieces that Johnson and Green do well. They just don't do enough of them for the sake of fight scenes that go on for pages and pages with little satisfaction. If the pair could work out that flaw in their writing, we'd have a perfect book on our hands.

Okay, the previous issue began a story arc which was interrupted by Supergirl #0. Hopefully some elements from it will play out in future issues. Otherwise, we'll just have a 'fill-in the blanks' type of tale. I'll keep my eyes peeled and hope for the best.

Art - 5: It seems like Mahmud Asrar has been evolving as an artist with each chapter of Supergirl's life. This issue in particular shows his strengths of fantasy/sci-fi/horror images. I hope that Asrar gets a chance to work in those genres. He'd be perfect on something like Conan or the new Tales from the Crypt book.

Cover Art - 5: Okay, this seems more like it's better suited for a poster, but it does work for a number zero issue. It doesn't follow my normal criteria for cover images. Yet, I can't help but like it.

New 52 First Year - 3: Like any brand of comics, there's good and bad about the New 52. There are some books I enjoy (Action Comics and Justice League), others that bore me (Superboy and Teen Titans) and still others that go either way depending on the issue. (Superman and Supergirl).

I'm of two minds about the New 52 in general. On one hand, we get revitalized characters. On the other, the cynic in me can't help but wonder what DC's going to do when interest peters out as it did with Marvel's Ultimate line of comics. I'm an old school comic fan. Back when I started reading them in the 1970s, if something didn't work, the editorial staff changed creative teams without reboots or whatever. I do like the New 52. Yet, I'd love to see more stories from pre-Flashpoint times. I feel there's room for both versions of the DCU.

Supergirl's first year started off sluggishly. Seven issues to tell its opening arc that could have been half as long didn't appeal to me at first. Yet, I'm glad I gave it a chance as there have been some vast improvements in the writing since I took on the assignment of reviewing this title. There's still room for improvement here and there, but it's still been a fun run so far. I look forward to the next year of stories.