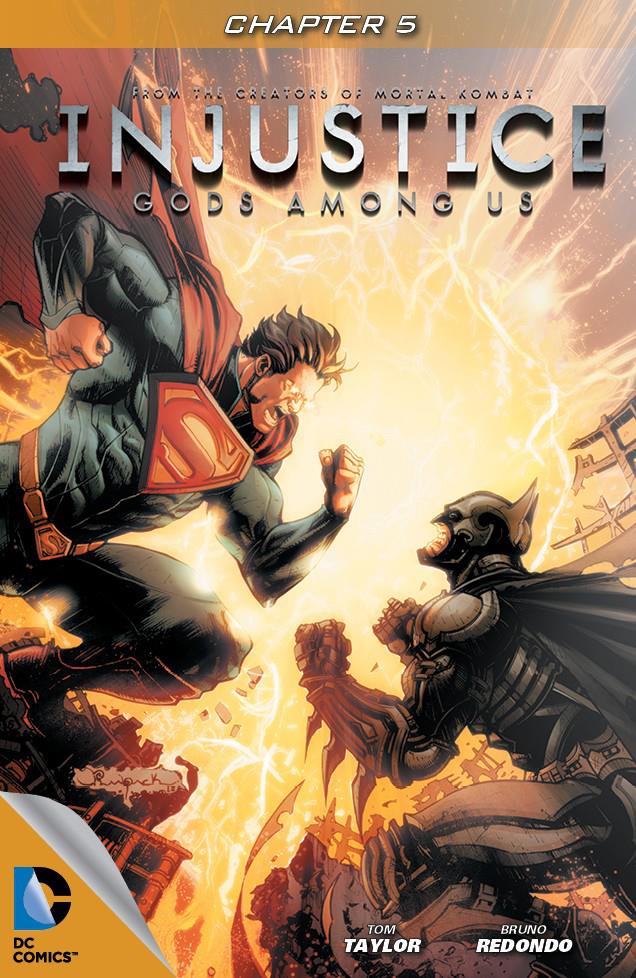 Injustice: Gods Among Us - Chapter #5

"Injustice: Gods Among Us" - Chapter Five

Click to enlarge
Harley Quinn, in full prison orange, is using her handcuffs to strangle her police escort in the back seat of a patrol car. The cop's partner tries to intervene, but Harley shoots him - she's mourning the loss of Joker but isn't about to just give up. She drives to a safe house and, just as she's changed into her costume, Green Arrow steps out of the shadows, bow at the ready.

Harley throws a Joker bomb that catches Arrow off guard and his intercepting arrow is too late - he takes the impact, Harley approaches with her mallet and strikes... only to discover that the mallet is a squeaky fake. So she takes out a handgun, certain it doesn't squeak, but Arrow is quick this time and shoots into the barrel, causing it to backfire (harmlessly). Harley is so impressed she insists Arrow repeat the performance. But this time the arrow casts a net, and Harley goes down. "You suck," she tells him.

In Arrow's vehicle, Harley asks whether she's being taken to Superman. From what she's heard, Superman will almost certainly kill her if given the chance. Arrow says he believes killing is sometimes necessary, but doesn't believe in "executions." She then asks him why he needs a boxing glove arrow. He says it's for when he needs to "punch someone who's a really long way away." He then hands her a different arrow. She asks what this one does. He flips a switch on it, gas spits out of the head and she tells him "You suck" again as she passes out.

When Harley comes to, she's handcuffed to a pole at the Arrow Cave, which is lead-lined so Superman can't see in. She tells him "The Quiver" would be a better name than "Arrow Cave." He reluctantly agrees. As he prepares to leave, he tells her not to bother using a fake hand to escape, that nowhere is safer. She says she doesn't have a fake hand: that was always the Joker's gag. She asks whether Arrow has ever loved someone he knew was wrong for him. He says he has.

Arrow turning again to leave, Harley asks a favor - that Arrow give her a "little maniacal laugh." He emphatically refuses but, turning back in pity to look at her, he sees she's done something with her face and erupts into raucous laughter at the sight of her in a fake moustache.

Story - 3: So, I guess I could say we needed this - comic relief, I mean, after the previous couple of weeks of atrocity and outrage. I even found Harley to be well and sympathetically portrayed, and Arrow, too, I guess - he's a good non-Batman choice for a hero to express concern over Superman's abuse of his power but his function here is kind of stock.

Ultimately, the relief was weak.

For not only did it really drive home the influence of Moore's Killing Joke on this thing (which I could appreciate insofar as it remains the quintessential portrait of the Joker and his modus operandi [we saw it in Nolan's The Dark Knight, too - putting otherwise normal people in extreme/impossible situations to try and drive them to insanity], it was not especially funny. I mean, I laughed along with Batman and the Joker at the end of Moore's masterpiece. Here, I just grimaced. The dialogue in the Arrowmobile (or whatever) was generally and more naturally comical. A simple fake moustache? Sorry. Not even a little bit hilarious, maniacally or otherwise, no matter the height of the tension. I'm sure the simplicity of the gag is the point; it just fell flat to me.

Point is, I was more interested in looking for clues as to how long after Superman's murder of the Joker this scene takes place. If Harley is in police custody, it has to be at least a few hours, a day or more. Was Arrow's line about "executions" speculation based on just the Joker's (presumed) death (he's going to be in the game, after all) or has Superman already killed others? I didn't find any clues.

Meanwhile, it might be worth nothing that Injustice appears to be the first time that this plan of the Joker's will have the effect he intends. In Killing Joke, a naked but stable Commissioner Gordon insists that Batman follow the law in apprehending the Joker while in The Dark Knight neither the regular citizens nor the criminals blow up the others. In Injustice, however, Superman acts out of character pretty much right away.

That would be more interesting if, in fact, he hadn't acted out of character before he had any idea that the Joker was even involved, and that's going to continue to nag at me.

Art - 5: My experience with digital firsts is that artists change hands rather more often than they do on the regular books. I'll have to make a note to look into/confirm this at some point. In any case, while I've found that this trend has more often than not hurt the likes of Smallville: Season 11, here we don't really miss a beat. I actually didn't even notice much difference until it came time to put this review together. That means high marks to me.