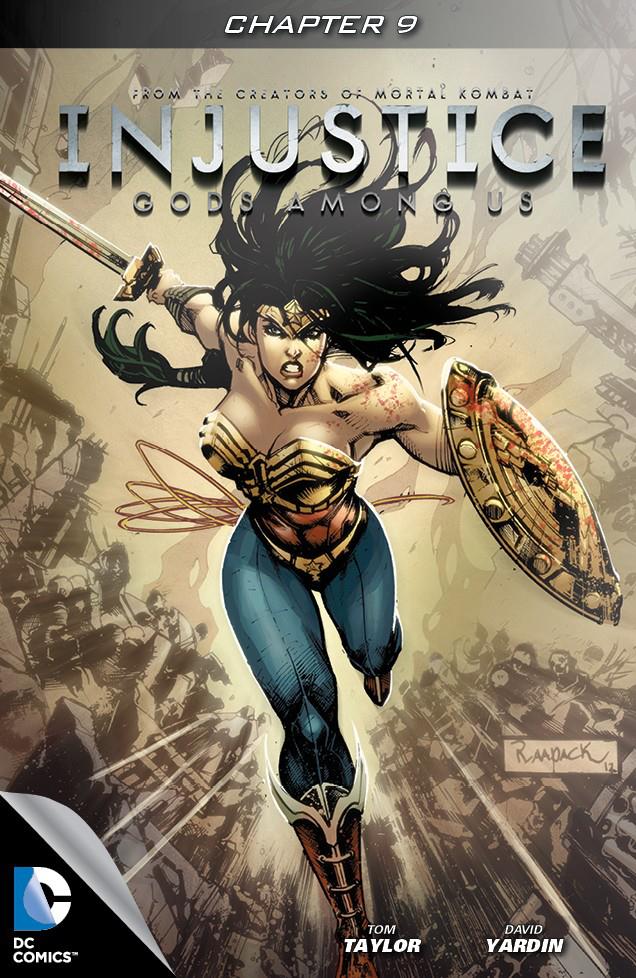 Injustice: Gods Among Us - Chapter #9

"Injustice: Gods Among Us" - Chapter Nine

Click to enlarge
Ares, God of War, observes Wonder Woman in her efforts to enforce the global peace Superman demanded from the United Nations. (The nation of Qurac has defied Superman and has been bombarding the "largely defenseless" neighboring Jusdal.) Ares admires Wonder Woman's prowess, but is surprised at her tank head-butting technique. He approaches the Amazon princess to discuss the state of things on Earth and her role in them. She explains she is not at war, that she is merely keeping the peace and that she believes in Superman's cause, telling Ares (upon his question of whether she, Wonder Woman, will replace Lois Lane in Superman's bed), "He is the greatest man I have ever known. I will be whatever he needs me to be." Turns out Ares is nervous of a union between Superman and Wonder Woman because it could lead to Superman losing all restraint (a hang-up Ares figures Wonder Woman doesn't have), thus to a world that cannot fight and in which he might indeed be relegated to "God of Ponies," as Wonder Woman caustically jokes. Taking offense at the gibe, Ares threatens Wonder Woman, telling her neither she nor Zeus himself could prevail over him amidst all the destruction around them, which fuels him. And then Superman arrives to intervene, knocking Ares unexpectedly to the ground. Wonder Woman then chops off Ares' hand and, when Ares says he will slay her children on the day they are born, she stabs him, skewering his body to the ground with her sword. As he and Wonder Woman walk away, a surprised Superman asks whether gods feel pain, to which Wonder Woman replies that it's different than the pain mortals feel - that gods don't die, but they do fade. Ares, meanwhile, bleeding on the ground and in shock, contemplates his future as the God of Ponies...

Story - 2: This issue did very little for me. That's partly because I've just never been interested in Wonder Woman, the issue's principal character. This is in fact a chronic lack of interest that has the result in this context of me not really having any idea how far removed from canon her characterization is here - in particular, her willingness to "be whatever [Superman] needs [her] to be." I'm sure I'd have more to say about her role in the story if this was not the case. Overall, she seems appropriate for a warrior, but that's about as nuanced as I can get on this one. Feel free to send me your thoughts for inclusion in a subsequent review. (Note also that I'd have scored this a 1 if not for my basic uncertainty/ignorance here. Just FYI.)

That aside, the rest of why I didn't care for this installment is that I'm the sort of superhero comic book fan who really doesn't like to see the deities and heroes from our actual ancient mythologies appear as characters alongside the superheroes, like Ares does. From my perspective, this kind of stuff defeats the point of superheroes and renders them altogether superfluous, given how thoroughly they are based on mythical archetypes to begin with (easiest example: Captain Marvel's SHAZAM is an acronym for Solomon, Hercules, Atlas, Zeus, Achilles and Mercury - conflation of Greek and Roman variants notwithstanding, and actually kind of the point I'm about to try and make). I don't care too much that Injustice is saturated with Kingdom Come and The Killing Joke and The Dark Knight Returns, but I do care that Wonder Woman lops off Ares' hand for the 'crime' of touching her menacingly. I do care that Superman arrives and bellows, aghast, at a GOD, "You dare!" He's ARES, not some petty thug with delusions of grandeur.

Let me unpack my misgivings about this for you. I am familiar with not only ancient mythology but also a good deal of non-superhero fantasy literature - the swords and sorcery stuff, in particular, a lot of which includes pantheons of deities who have some tangible presence in their worlds. A relatively good one that always comes to my mind in this context is the Dragonlance Chronicles saga, which takes place in a world 300 years after a "Cataclysm" has laid waste to the land, killing countless thousands, because the mortals had become too arrogant (represented by the Kingpriest of Istar and his church), demanding the eradication of all evil and the immortal power to do it, although the universe is shown/known to thrive in a balance between good, evil and neutrality (with sub-sets of the pantheon's many deities accordingly aligned). So, the gods aim to teach the mortals a lesson via destruction and the subsequent cessation of their interaction until such time that the lesson has been learned - all the "true healers" are removed from the world in a kind of rapture on the eve of the Cataclysm and the mortals are left to fend for themselves.

Three hundred years later, the world has returned to a kind of balance, though it continues to lack for "true healing" and any genuine sign of the "old gods." The prevailing wisdom is that those "old gods" abandoned the mortals back during the Cataclysm, and some "Seekers" have taken to worshiping "false" gods instead. Indeed, the entirety of the Chronicles trilogy is a quest for those old gods, while the lesson I mentioned ends up being that the Cataclysm happened not because the gods turned from men but because men had already turned from the gods.

(Yes, I am getting to a point with all of this.)

As much as I loved those books in high school, I've never been able to get past the books' clear analogy that "turn from the gods" is what we real-world humans have also done - that there are no miracles anymore (people coming back to life after having been crucified, for instance, or water turning into wine, or flying horses) not because God (or, the gods) doesn't/don't exist but because we have lost faith and refuse to see Him/him/them.

Here's the problem for that story (my point, yay), and for comic books (and, thus, Injustice #9): for the lesson to be truly learned in the Dragonlance narrative, the actual gods have to make an appearance. (And, boy, do they. The entire edifice is constructed on the empirical reality of the gods' interplanar existence.) Faith is completely out the window as a practical requirement, even as it's preserved intra-narratively as an inherently good and ultimate expression of worship. This is a trick that you just can't pull off in real-life, thus effectively diluting the story's didactic merits, such that they are.

In the case of worlds featuring both superheroes (as effective incarnations of the divine) and the manifest divine itself, one cancels the other out, so all we're left with is a kind of redundancy where the heroes are basically unnecessary and yet, in the case of Injustice #9, somehow more powerful and more righteous. "You can have your hand back when you can be trusted with it." Really? Some god, subject to that. And Wonder Woman here? Some hero.

Now, could it be that the symbolic thrust of the narrative is to somehow show the obsolescence of the "old gods" thanks to the emergence of these modern heroes? It doesn't feel that way to me, even though, on the surface of the dialogue in Injustice #9, that's exactly what seems to be happening, and quite literally. As I've said before, I'm much more interested in the symbolic storytelling uses these characters are put to than in whether they literally hew, at any given time, to their most popular variations. It's why I don't care about most of the details of Superman's various costume iterations, or why I'm fundamentally ok with a "Superman story" in which Superman turns into a dictator - indeed, I don't tend to see "Superman stories" or "Batman stories" but stories featuring Superman and Batman that, more to the point, are "about" the ideas they embody. Symbolic utility and value is why I am not bothered by Superman's portrayal in The Dark Knight Returns: in that story, Superman's garish, self-righteous pomp is less a comment on the character we love than it is on the United States (more exactly, its government), swaggering around the highly volatile world stage (thanks in particular to the Cold War and the omnipresent threat of Mutually Assured [nuclear] Destruction) as though it could do no wrong even while it plainly could. He was a caricature of a form of truth and justice that seemed, at the time, to have become less than true and less than just. Is it really any wonder that something about that resonated in the culture?

At best, I can accept the presence of deity characters like Ares here in Injustice or other superhero tales as counterpoints, but ultimately I find their use to be trite and cheap - they are ready-made characters in whom no one is much emotionally invested, such that (apart maybe from Marvel's Thor) there aren't likely to be any Ares Homepages out there where legions of fans can come together to complain about how the current publishing teams are destroying (or not) their icon. Meaning, the publishers/writers/artists can do anything with these "characters" with relative impunity - up to and including dismemberment and murder. Evidently. Poor Ares.

It's a bit lazy. And then you've got a somehow-innocent-again Superman asking "Do gods feel pain?" like some wide-eyed youngster straddling his grandfather's knee, hanging on every word because, well, it's his grandfather. And a Wonder Woman who knows the nuanced answer! It all ends up cashing out as little more than a ham-fisted attempt at allegory that, unfortunately, falls utterly flat. On its own - never mind its Kingdom Come or Killing Joke debts.

In terms of the broader plot, then, I think we can say, at best, that this issue shows that Superman has not yet lost all restraint, just as Ares, with his fading pony-bated breath, points out. But given everything we already know about where this is heading (or think we know, from especially those opening panels nine weeks past), I hardly think this needs to be addressed so very overtly, not least because the overtness is precisely what sucks the air out of the potential symbolism. How disappointing.

Art - 5: Possibly the best pencils, inks and colors this title has seen. Totally made up for the train wreck of a "story."