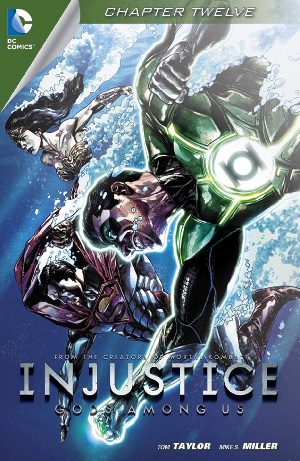 Injustice: Gods Among Us - Chapter #12

"Injustice: Gods Among Us" - Chapter Twelve

Click to enlarge
Batman contacts Aquaman using the Justice League communications system to warn him that Superman is on the way to Aquaman's location and that Aquaman should stop fighting Superman's "friends." When Superman lifts him up by the throat, Aquaman stands down but it is not long before reports come in of Atlantean forces rising up along every coast in the world. "Your world would grind to a halt if I willed it," Aquaman tells Superman. "Consider this a show of strength."

In response, Superman takes Wonder Woman, Green Lantern and Shazam and proceeds to lift all of Atlantis out of the ocean and move it to the middle of the Sahara Desert. Superman refuses to listen to Batman while Aquaman tells Wonder Woman he didn't think Superman was capable of such an act. But he agrees to call back his armies, and asks Wonder Woman to tell Clark he's "sorry about Lois."

Superman gives the word to have Atlantis returned to the ocean, and acknowledges that the action didn't "sit well" with Green Lantern and Shazam, but Wonder Woman tells him not to worry about what they think because he "did what needed to be done." Superman then expresses an expectation that Aquaman had more to say, but Wonder Woman turns away and tells him "No. Nothing."

Story - 3: I don't know, Internet. I'm just getting kind of bored with this thing now. The sequence where they yank Atlantis out of the water and plop it down in the desert has all the motivation and yearning of big, powerful, high superhero drama but it manages to feel somehow ordinary. Maybe because here it's the inverse of how this kind of thing is normally used - think of the end of Superman Returns when Supes lifts Luthor's new landmass out of the ocean: it's impossible odds against which we want him to succeed because, if he doesn't, everyone dies. Not so much here. Here it's kind of horrible, like burning ants under a magnifying glass. Punishing the innocent. I can't root for that or accept it as what "needed to be done," no matter how "cool" it might seem.

Indeed, it's just more evidence, given the nature of the enterprise (and not that we needed it), that the primary target audience of this thing is those who come to these characters more for the "action" and the powers than for the stories, while the story simply justifies the battle-oriented conceit of the game. We will presumably eventually reach the point of more or less full-scale world war, at which point the comic will end and the game will begin. And everyone will always be fighting.

I don't even see the point in discussing character motivation or interaction any longer as it's now entirely beyond clear that neither consistency, logic nor canonical precedent are going to derail this plot from reaching its pre-determined endpoint. Superman is as blind, Wonder Woman as blood-thirsty and Batman as ineffectual as they each need to be to ensure that.

So I guess we just grin and bear it.

Art - 4: Not much to say about the art this week. It's a bit spotty in places, and not altogether consistent, but it more than holds its own.