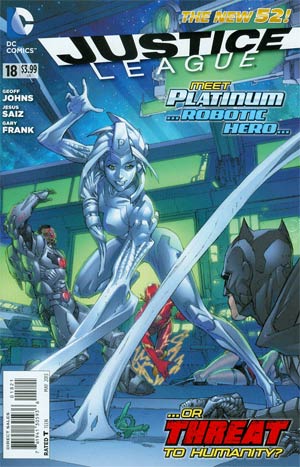 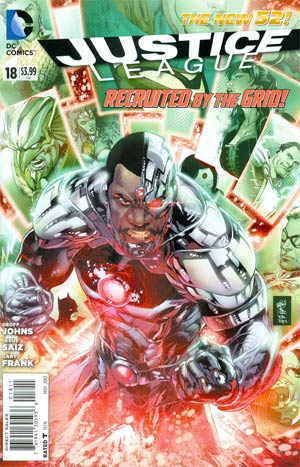 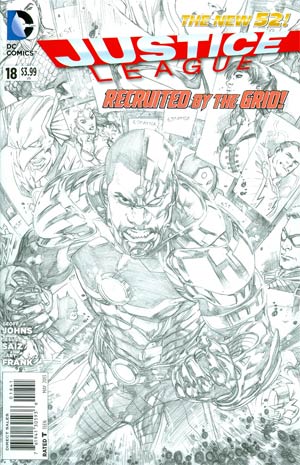 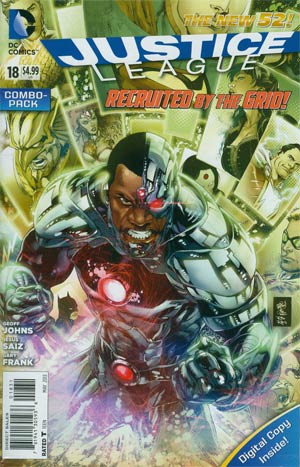 At Pittsburgh High, Ronnie Raymond and Jason Rusch (two high school students who can merge to form the hero Firestorm) are studying together. Jason is tutoring Ronnie so that they can attend the same college and keep their Firestorm career going. Someone contacts them via Jason's computer screen and Ronnie's earphones and offers to help them.

In Baltimore, Black Canary fights and defeats Copperhead (a hybrid creature who is part human and part snake). A billboard flashes and then displays a large message for Black Canary; addressing her by name.

In San Francisco, Zatanna is talking on her cell phone. On the other end is John Constantine, the leader of Justice League Dark. John is in the act of firing Zatanna from that team, when she gets a text message on that cell phone telling her to hang up, because there is a spot for her elsewhere.

At Watchtower, a Justice League meeting is in progress. They are discussing expansion of the team. Batman says that since they all have personal commitments, they need to find some new members who are able to dedicate to the Justice League full time.

They also discuss Cyborg's problem with attention. Since he is constantly being bombarded with data streaming into his system, he needs to selectively focus on high-priority items and filter out other data to keep from being severely distracted while on Justice League duty. Batman has suggested a set of buzz words to help identify certain pieces of information that are critical and should not be ignored by Cyborg. From these discussions with Batman, Cyborg developed a database containing nearly every super-human on the planet. The database includes code names, powers and abilities, and how to contact each of them in an emergency. Cyborg calls this important database "The Grid".

As the discussion continues, it becomes clear that Aquaman is very distracted as well, due to pressing matters in Atlantis.

As the discussion of new recruits continues, Flash wants to bring several of the better candidates to Watchtower for face-to-face interviews.

They do exactly that. In the next scene, we see an expanded gathering featuring the original members plus prospective members Black Canary, Black Lightning, Blue Devil, Element Woman, Firestorm, GoldRush, Nightwing, Platinum, Vixen, and Zatanna. There is casual conversation going on; not a formal meeting. As the visitors mingle, introduce themselves, and make small talk, Platinum goes out of control and attacks several of the others. She is acting disoriented, and keeps asking for Doctor Will Magnus, her creator. Vixen jumps in to restrain Platinum. Cyborg contacts Magnus, who indicates that Platinum, created as part of project "Metal Men," is flawed and should not have been sent. Magnus requests that the Justice League be very careful when handling Platinum, because her artificial brain is fragile, irreplaceable, and critical to his work.

Firestorm, who has the power of transmutation, converts Platinum's outer shell to water, revealing the responsometer (the electronic "brain") underneath. But without the supporting outer shell, the responsometer is in free fall and at risk. The new Atom (Rhonda Pineda) appears and catches the priceless piece of technology. Atom is eager to participate in the tryouts for the team.

Superman comments that several of the candidates are very inexperienced, but are ready to commit to membership full time.

During the commotion with Platinum, one of the visitors hacked the Justice League server containing case files and Justice League history, and stole the information. That person brazenly left a message including a large image of a skull and crossbones, essentially gloating about the theft.

Next issue, the road to Trinity War begins.

This story focuses on Cyborg and his efforts to manage the deluge of data that constantly streams into his central processor. "The Grid," is explained here as a database about all known superheroes. But it is really more than that. It is also a way of interconnecting the world's heroes when the reserves are needed.

We all know that Cyborg's built-in technology is pretty much connected to every computer that is online. So I was not too surprised that he was able to talk to Jason via his PC; to Ronnie by interfacing with his MP3 player; to Zatanna via her cell phone. But I was a little surprised when he used a billboard to communicate with Black Canary. I guess this billboard is one that displays dynamic, variable content. To do that, it probably connects to a small dedicated processor, which is why Cyborg can manipulate it.

I was reminded that Cyborg cannot only contact heroes, he can monitor them as well. Zatanna was pretty impressed when her cell phone texted her to hang up on John Constantine because she is needed by the Justice League. This showcased the fact that Cyborg can listen in on private phone conversations if he feels the need to do that.

This story is also about current efforts to expand the roster of the Justice League. I was interested in the choices they made. Some of the candidates are natural, excellent choices. Black Canary, Black Lightning, Vixen, and Zatanna are all capable, responsible, powerful candidates. But some of the candidates are just plain curious choices, such as Blue Devil and Element Woman.

Firestorm would be a worthy candidate if he had more experience. But as it is, a candidate that is that powerful, yet that awkward and untrained, is a pretty high risk; and perhaps should be left off the team for safety reasons. But there is an excellent alternative. Somebody from the core group should volunteer to train Firestorm. With some training, Firestorm would be an excellent new member to the team. I thought about this. Who would be the best person to train Firestorm? After some thought, I believe two candidates stand out above the rest: Flash and Batman. They both have scientific backgrounds, with a strong knowledge of chemistry. This could help Firestorm get a handle on his powers of transmutation. Flash would likely be more patient with young Ronnie and Jason, while Batman would be more stern. But Batman has a good track record, having done an outstanding job training Dick Grayson, the original Robin. Perhaps Flash and Batman could take turns. I would like to see something like this happen.

Some choices for new members were downright perplexing. To be candid, I had never really heard of GoldRush before she showed up in these pages. I know very little about her, except that she is strong enough to easily lift a chair with a person in it; she has a golden shell that probably affords her some measure of protection; she likes to flirt, and is not shy about asking Flash if he is married.

And of course, the selection of Platinum was a complete disaster. She should not have been recruited or allowed inside Watchtower.

I had some additional thoughts and questions as I read this. I am wondering about Aquaman. Is Aquaman too busy as King of Atlantis to be in the Justice League? There were some clues here that being a king keeps you way too busy to be an effective Justice League member. We will see if he is able to juggle these separate duties effectively.

And just who stole the Justice League historical data? If it truly was one of the visitors, I can see two strong possibilities. One is that Doctor Will Magnus used Platinum to somehow spy on the Justice League; and that her tantrum was a diversion. The other possibility is that Nightwing is responsible for the theft, since he probably has the technical expertise to pull it off. I cannot imagine what his motive would be, however.

So I vote for Will Magnus and Platinum. In fact, I predict that Platinum downloaded the data during her tantrum, and that it is stored in the responsometer that Doctor Magnus was so anxious to get back.

I wonder which candidates will actually be selected for Justice League membership and sworn in. Time will tell.

Art - 4: Jesus Saiz does an excellent job filling in.

Evil Mr. Bryer and his sons, the schoolyard bullies, show up on the doorstep of the Vasquez family. Bryer accuses Billy of destroying his SUV. Billy's family defends him. When the police officer asks to speak to Billy to straighten everything out, his family says that Billy has been missing since yesterday. They think he ran away. The Vasquez family members ask the police officer for help in finding Billy.

Suddenly, they see Black Adam streak across the sky carrying a bus, which he proceeds to smash. He smashes an 18-wheeler truck as well. TV reports show Black Adam threatening the new hero, Shazam. Freddy reveals to his siblings that Billy is Shazam, and is thus in danger.

The kids head out to find Billy. They do find him, at the zoo speaking to Tawny, the tiger. Darla says she wants to see Billy turn into Shazam. Billy is miffed at Freddy for revealing his secret. Mary says that Black Adam is hurting people, and that they need a hero to protect them. Billy says the magic was given to the wrong person, and that he is not worthy.

The kids head into the subway station to find their way to the Rock of Eternity.

Meanwhile, Doctor Sivana tells Black Adam that the Seven Sins have gathered. Black Adam says that it is time to end this world, and the cowardly champion along with it.

Story - 4: I liked this installment. I was glad that the secret was shared with the other Vasquez kids, even though it was Freddy, not Billy, who spilled the beans. I hope they make it to the Rock of Eternity. And I hope Billy finds his confidence and his resolve.

We know from past versions of the mythos that Mary and Freddy eventually are given the magic and become heroes too. But the most deserving, in my opinion, is Darla. She is the kindest, most compassionate, most upbeat kid in the family. She would make a worthy champion.

Cover Art - 4: Cyborg takes center stage this time. We see a determined Cyborg front and center, with images from "The Grid" in the background. I like the interesting color scheme; Cyborg in silver and a red hue, and images from The Grid in a contrasting shade of light green.

Cover Art (Variant Edition) - 4: This is a pleasant variant cover. We see Platinum in the center this time; looking rather harmless, and kind of cute and innocent. The blurb says, "Meet Platinum... robotic hero... or threat to humanity?" Having read the story inside, we certainly know the answer to that one!