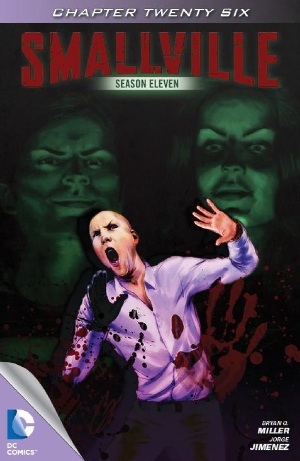 Click to enlarge
Otis greets Lois Lane at the Lexcorp offices, where she has come to interview Lex Luthor. They banter about what Lex is really all about until Lex, hearing everything through his open door, interrupts. Lois confronts Lex about Doctor Simon Jones and the Ares project. Lex recites Lexcorp boilerplate about the company's stance on the matter while sub-conscious Tess compels him to scrawl "Help!" on a scrap of paper and hand it to Lois, who reads it with surprise on the way out the door.

Meanwhile, Superman and Impulse are enjoying a rematch of their race from years past, with Superman admitting he can no longer run as fast as he used to since he learned to fly. They race through Africa and pause to play soccer with some children in India. Over lunch, Superman tells Impulse about the radiation Lex tagged him with and the complications it has brought to his life while the two generally wax sentimental about what each means to the other. Soon, Chloe at Watchtower interrupts and alerts them to trouble in France. Superman proposes yet another race, Impulse offers a head start, and they are off into the sunset.

Story - 3: Happy New Year, Superfans! Apologies for the silence on Smallville: Season 11 for the past couple of weeks, but everybody needs some time off every now and then, amirite? Let's get back to it!

Here we are at "Haunted"'s second commercial break, following a segment where almost nothing happens except a single great storytelling moment and a lot of bromance between Supes and Impulse. Now, I appreciate the bromance here because the show handled this relationship as well as it handled any other and better than most, so, I can relate to it. However, the effect that so much time spent on this has on me is to take from the urgency of (1) the Tess situation, which seems like it might be starting to get interesting and (2) everything else. In other words, this kind of extended reminiscence (because that's all it is, really - we are essentially replaying scenes from the show, with the added admitted bonus of seeing the two of them express their mutual brotherly love for one another, which as a more-sensitive-than-I-bet-some-of-you-expect kind of guy myself, I can respect) works well on an actual show where the escalation of whatever conflict will try and hold the center of this story together is bound to mount after only a few minutes of commercial time, not a full week. Like so much of the trouble I have with this book, it comes down to pacing.

Put another way: I was pleasantly surprised and highly impressed with the scene where Tess compels Lex unknowingly to write that note to Lois right in front of her only to have the wind sucked out of those sails with Clark's and Bart's extended trip down memory lane. (I don't know why we haven't gotten a full issue (or most of one) on the Lex-Tess stuff, yet, but here's hoping.) There is the interesting open question of whether that veiled woman in Africa will re-appear, which the close-up on her suggests is affirmative but could be... misdirection. (!) Otherwise, it's a nice series of moments between the two heroes but I would have preferred less of it and more information about whatever the central conflict of this arc is going to be. At the moment, I've got no idea. That weird "B ... ARRRRRRR ... BAAAARRRRRRT" toward the end as Bart is counting down Superman's head start probably has something to do with it, but as of now I can only begin to speculate.

A couple of random additional things that stood out:

If you laughed genuinely at the "Otis Berg" joke, you are a more carefree spirit than I. For I, you see, laughed not but cringed and groaned - groaned long and loud and even had to put my iPad down and rub my temples for a spell, Picard-like, with nary a drop of soothing hot Earl Grey in sight. For those who missed it, Otis has not had a last name before now and what Miller has done is punned a reference to Superman: The Movie where, on Lex's floor map of the United States showing the post-earthquake California ("Costa del Lex"), Otis has inserted "Otisburg," vainly expecting to get a little piece of the pie-to-be all to himself. It's just so obvious and, frankly, weak. Also corny and both groan- and cringeworthy. To my way of thinking, anyway. Light-hearted? Fine. But also kind of dumb. They are really running out of ways to evoke Donner now.

Also, Superman now speaks fluent Hindi? Come on. Nothing in the Smallville universe has given me any indication that this Superman/Clark is especially intelligent, such that he could learn a complex language in mere months. Straczynski's Superman is crazy smart, as apparently is Morrison's. But Smallville's Superman? We all remember Neal Bailey's "dumb as Clark" awards, don't we? There was a reason for those things: this Clark was never that bright. So that pulled me out big time. Also, they speak a whole lot of English in India, largely because the British ruled that country for almost a hundred years. Thus I find it jarring that he still can't speak Russian six months after putting on the cape (remember the first issue?) but a month after that (according to Lex, it's been seven months since he lost his memory, thus it's been seven months since The Blur became Superman) he's speaking Hindi. Small potatoes, maybe, but still pulls me out.

And that's that. Not exactly bad, but not great. Kind of holding in place, which from where I sit seems to be Smallville's most natural state. Thus, 3 of 5.

Art - 4: I detect some fall-off in quality from Jimenez this issue - see, for instance, the opening scene between Lois and Otis where, in the overlay panel of Lois and Otis shaking hands she has no eyes or in the bit with Lex commenting through the door that the door is open where she has no fingers and she appears to be tee-hee'ing, anime-style. These kinds of things stand out precisely because when the work is on form, it's really on form. Otherwise, pretty strong.