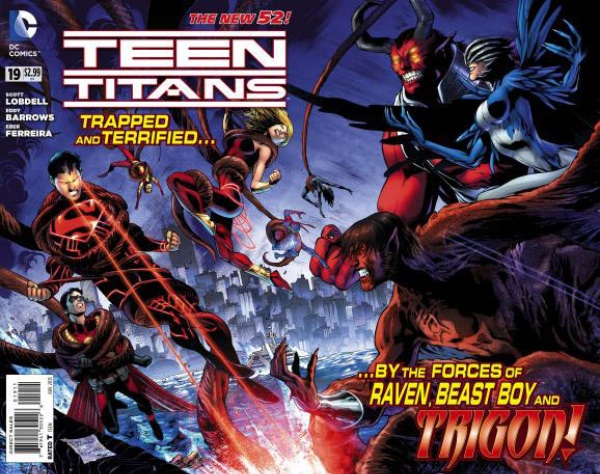 We open with ramifications from last issue, as Wonder Girl chokes Red Robin for having the team go up against the Suicide Squad. Kid Flash zips around, trying to pull Wonder Girl off Red Robin, before she punches him in the face.

The rest of the team try to talk Wonder Girl down, as Red Robin staunchly holds his ground. After Wonder Girl lets go, Red Robin declares that the team was set up by him, and he calls the shots, and if any of them don't like it, they are free to leave and take on the problems that have plagued them by themselves.

As Red Robin walks off, Bunker notices that there is something unusual happening in the sky. Suddenly Wonder Girl falls to her knees, as her mysterious armor begins to morph around her head and shoulders. Wonder Girl then flies off, acknowledging that Trigon has arrived on Earth.

Superboy fills the team in on what he knows about Trigon and how it's connected to Wonder Girl's armor, and the team deploys into action after her.

We cut to Time Square in New York City, where Trigon is wreaking havoc atop his three-headed horse. We see the mysterious white haired man from the previous two issues, trying to save his own skin, as he kills a female with his mind powers, who was attempting to save herself by hiding in the same spot beside him.

Wonder Girl engages in battle with Trigon, but ultimately fails, as Trigon gains the upper hand. He hold her close to his face and mentions her father, telling her how much more powerful she would be if she only knew her lineage and was raised by her father instead. Wonder Girl is stunned at this new revelation, as Superboy flies in and hits Trigon with everything he has. Bunker helps Superboy in his attack on Trigon, but Superboy is whisked away by Kid Flash, as Trigon attempts to destroy him with a Hell Fire blast from his eyes.

The rest of the team joins in on the action as they catch up with Superboy, Wonder Girl and Kid Flash. Red Robin gathers intel from Wonder Girl on Trigon, and wonders what Trigon's motives are for this attack.

We cut to Los Angeles, where we find Gar Logan aka Beast Boy lying unconscious in some rubble. Trigon's daughter Raven approaches his body and revives him. The two share a very brief exchange before she feels Trigon's presence on Earth just as Wonder Girl did earlier, and teleports herself and Beast Boy away.

Meanwhile in NY, Trigon is making short work of the Teen Titans. Red Robin stands and observes the battle, as Kid Flash attempts an attack so the others can get a chance to regroup. Trigon manages to stumble Kid Flash before he gets a chance to attack by mentally showing him images of himself from the future time-line from where he came from. Like Wonder Girl before him, Kid Flash is stunned at the revelation that is bought to light by Trigon, and he falls to the ground.

Solstice comes across the white haired man from earlier, she asks if he is ok, before he can respond, Raven appears with Beast Boy. She orders him to capture them, so not to interfere with Trigon. Beast Boy captures Solstice, Red Robin and the white haired man in squid like tentacles that he has grown from his metamorphic body.

Amidst the chaos, Red Robin, while still ensnared in Beast Boy's tentacles, again questions Trigon's actions. He knows that Trigon has enough power to destroy them all, so why has he not done so?

Solstice tries to calm the white haired man, who declares that he is not at all afraid, and that Trigon is right, and that he has power beyond his imagination. He reveals himself to be Psimon, as he lets forth a psychic blast toward Beast Boy, freeing him as well as knocking both himself and Beast Boy unconscious.

Our closing shot reveals that Psimon's blast killed many soldiers that the army had sent to help contain the situation. The Teen Titans manage to regroup, and are stunned at all the chaos surrounding them, as they then come face to face with Raven.

Red Robin states that the world will remember this attack and blame the Teen Titans, who were trying to help, but still many people died in the process. Superboy questions Raven, asking if this is what her father intended all along, to have the world be against them, for not being able to help.

Raven declares that she would not countenance murder, even in the name of her father Trigon. We are left with her parting words... "Only when Trigon has stripped your lives of Honor, Love and Friendship will he finally claim your souls".

Story - 4: To give this issue a food analogy, there was very little meat to the story, but plenty of seasoning. This was a good issue, but after I initially read it the first time, I really felt it was rather short. If this were an episode of an animated show, then this is obviously the first part of a two part story, with a lot of the episode being action orientated.

However it was still a very solid action packed issue, and I rather enjoyed it, no matter how decompressed the story may be.

Lobdell teased us with Kid Flash's New 52 origin as well as adding to Wonder Girl's. It's obvious that the armor is not the only factor that "powers" Cassie/Wonder Girl, as well as Bart/Kid Flash being the "time child" as Trigon put it, may be an exile from the future, rather than a refugee.

Bunker and Solstice had smaller roles again this issue, but they were utilized rather well.

Red Robin seems to have grown Batman's attitude, which I feel is really out of character for Tim Drake. And finally Wonder Girl took center stage with the team, with her armor having close ties to Trigon. I initially didn't like that Wonder Girl's armor was in some way related to Trigon, as this took her away from her Wonder Woman roots. But with the tease who her father may be, I'm more than a little intrigued.

The white haired man turning out to be Psimon caught me off guard. I like how his origin in the New 52 is related to being caught between Trigon and the Teen Titans. I'm excited to see where Lobdell takes this character.

Now there were a couple of points that bugged me in the writing this issue, which is what cost it a point from me.

Firstly, Red Robin's end speech about the dead soldiers, "They were just doing their job," but then he went on to say, how it will ultimately make the Teen Titans look bad because they died... What a real d-bag thing to say. He seemed to come off as a self centered little punk in that scene. Tony Bedard helped with dialogue this month, so I don't know who's to blame for that "stinker".

Secondly, why is Superboy so casual as he talks to Raven at the end? "Is this your father's plan, to make us look bad"? instead of "Who are you, and why are you attacking NY"?

Unless I'm missing something, shouldn't Raven be a total stranger to the team? How do they know her, especially by name? Shouldn't Wonder Girl be grabbing her by the neck and threatening to punch her head off?

That said, I'm still excited to see what comes next. This book has really switched things to high gear. And every month, we are peppered with more details of the origins of each member of the team.

Art - 5: The art was phenomenal this issue. I've said it before, Eddy Barrows is one of the best artists that DC has right now.

The opening splash page is awesome and my favorite of the entire issue, as we see Kid Flash, trying to pull Wonder Girl off of Red Robin. It's comical and powerful at the same time.

Trigon looked powerful and a credible threat. Beast Boy looked unusual and quite frankly "beasty," which was great! We got to see Raven's face, and how her cowl forms around her head. And the team just kicked some major butt!

If I had one complaint, it would be that Trigon was too top heavy, and the smaller legs gave him the Johnny Bravo look... However, this may be done on purpose to make him look more menacing.

One of the best things that Barrows brings to these characters is his facial expressions. Every character evokes emotion, which lately, I have found some of the top talent sometimes can't seem to manage. Page 2 and 3 are prime examples of this. The look on each character's face speaks volumes.

This issue featured multiple splash pages, all were used really effectively, and further added to the atmosphere of the story, as seen in the battle scenes. However, a few more panels in some of these splash pages may have helped slow down the pace of the book, so it wouldn't have read so quickly.

Lastly, one minor quibble, carries on from the last issue... Trigon's three-headed demon horse, looks more like a pony under his giant frame.

All in all, I love the art in this book. I'm glad we've got Eddy Barrows on board! Excited for next month!

Cover Art - 5: I'm not a fan of the "gimmicky" covers. So when I heard that all the covers were going to be gatefold ones this month, it automatically reminded me that the New 52 has really been a re-hash of a lot of what the 90s had to offer for the comics medium.

That said, a lot of artists have enhanced their books by furthering the story telling aspects using these covers. Eddy Barrows, Eber Ferreira and Alex Sinclair did an awesome job with this cover. I love how before you fold out the gatefold, that Superboy is front and center. He looks powerful and "in charge"!