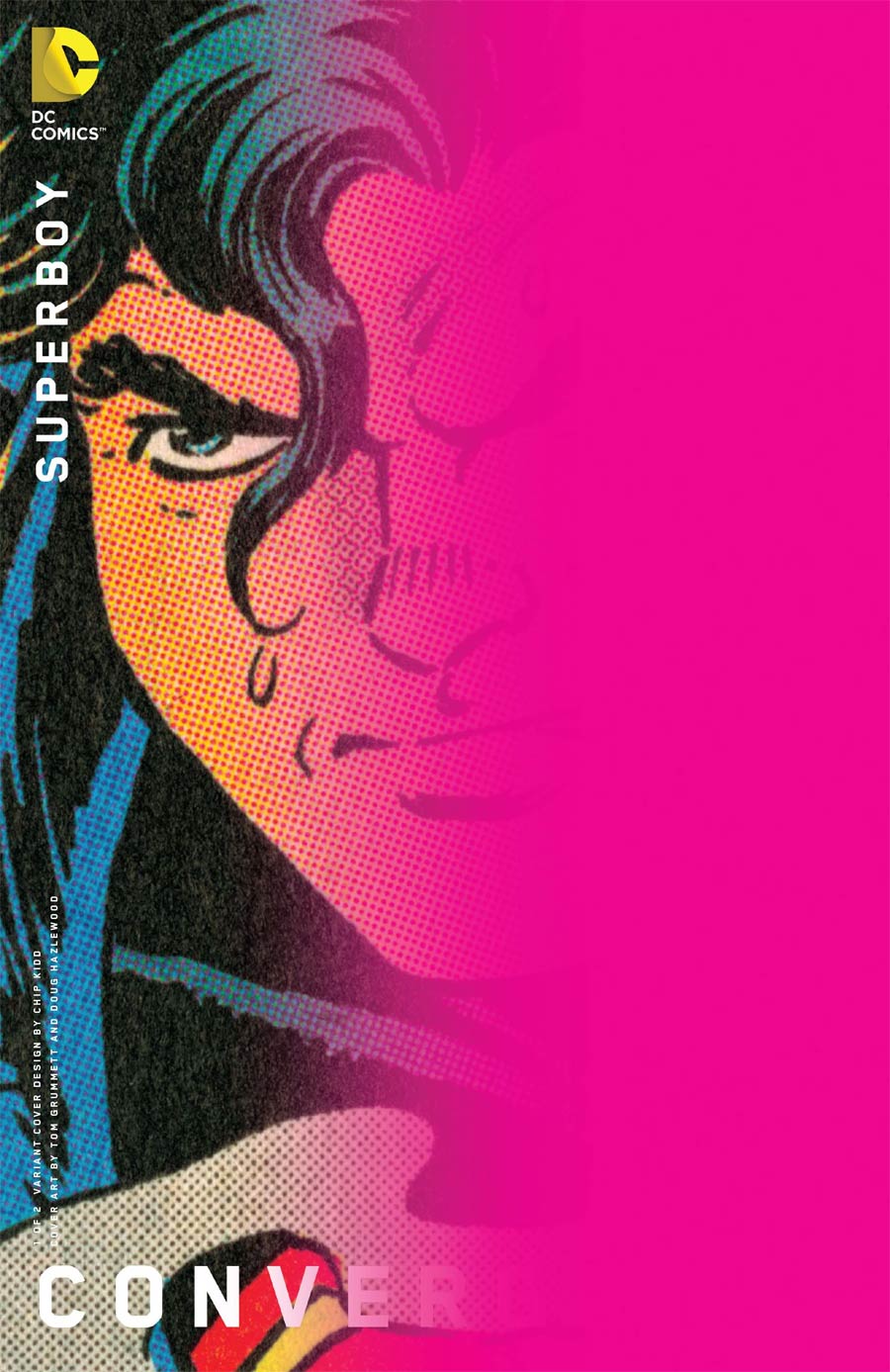 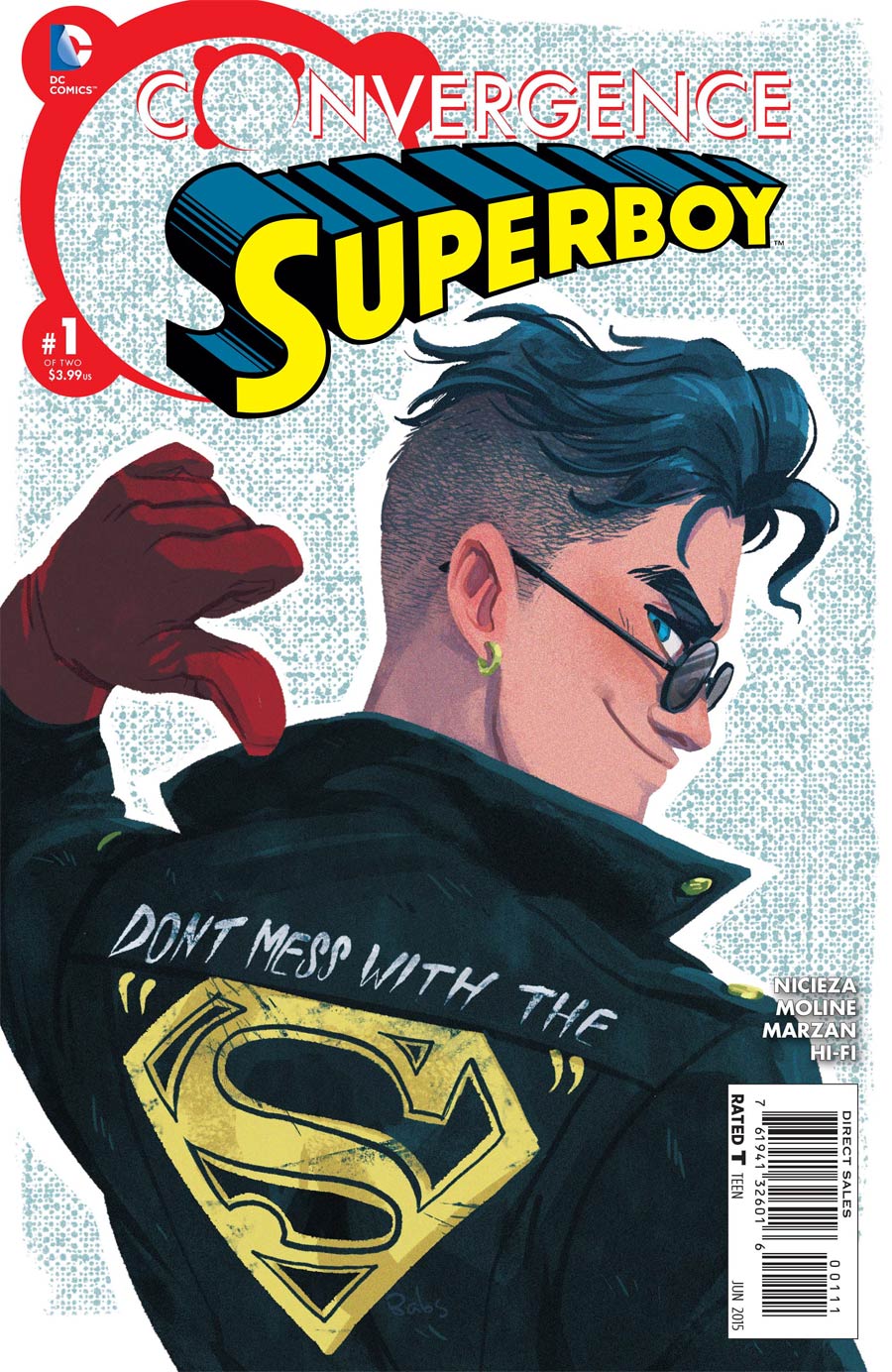 "The Hero's Return" - Part One

Click to enlarge
Serling Roquette & Dubbilex are running test after painful test on Kon to restore his superpowers.

A year in the dome has left him completely powerless but the tests reveal that he is still super-powered, however whatever force has them captive is blocking Kon's use of his abilities. Superboy reacts angrily at their analysis pointing out that the dome might not be on Earth and that if a villain did kidnap them why has he kept completely silent for a year yet ensured power and life support for the city all that time. If it was a super villain then having a powerless hero as Metropolis' only protector surely meant that they were ripe for conquering. Serling tries to lighten the mood pointing out he is SuperBOY not SuperMAN. Of course Kon retaliates and storms out of Cadmus. Dubbilex remains calm but has been listening to what Kon said and agrees that villains such as Darkseid, Krona and Brainiac could easily have done this... but kept silent? Unlikely. Kon's friend feels sorry for the teen's predicament. Superboy was always an arrogant teen, it made Metropolis dislike him under the management of Rex and Roxy Leech. They hadn't long left Hawaii and just as Superboy was maturing enough to accept his future as the next Superman... this all happened.

Kon is moping around the streets as he passes the Daily Planet building and watches as Lois Lane and Jimmy Olsen are racing into action with him unable to help. Depressed, the teen instinctively walks to the Superman Memorial statue. An elderly couple approach and relay a story of Superman and his selflessness. The announcement from Telos interrupts revealing the dome to be gone, that a battle amongst cities must commence and that the heroes of each city are now... Super.

Superboy soars through the skies but as he does a group of heroes from Kingdom Come Earth have infiltrated 1990s Earth. KC Superman and KC Red Robin instruct KC Flash to lure Kon away from the city and into Hell's Gate Island where they can formulate a proper attack. Dubbilex via a Cadmus Drone chases a red blur where Superboy asks his friend if Wally was in Metropolis and why he's choose to change from his costume into a bowl hat. Dubbilex can't answer but as they arrive at the island they see it has been literally severed in half. A flat piece of earth with water pouring over the end, like the days of old when people didn't know the planet was round.

A puzzled Superboy loses sight of KC Flash but catches sight of Red Robin ducking into a broken shop front window. Superboy realizes too late as a flash grenade explodes filling the room with Kryptonite gas. Serling and Dubbilex detect a fight through Kon's biometric sensors and telepathy, however the DNAlien is stunned to read the mental patterns of his opponent. KC Red Robin orders Kon to stay down and smirks that Superboy is an arrogant sidekick. Kon corrects him and uses a blast of TTK to knock KC Red Robin off his feet and clear the gas from the room. KC Flash races in and saves KC Red Robin from a knockout blow. Kon asks Cadmus to identify his foes and Dubbilex reveals KC Red Robin is a match for a young Dick Grayson and KC Flash is only fifteen years older than Wally West. It isn't their friend but definitely a doppelgänger for him. Running a mental reading the DNAlien sees that the Kingdom Come heroes are from an alternate Earth that has endured devastating hardship and thus are distrustful of irresponsible young superteens.

Superboy uses the same tactics his foes did to catch him and gets them out of the enclosed space with his super breath. Once outside Kon uses TTK to send the abandoned buildings nearby crashing down around them. KC Flash, with Red Robin in arm dodges as much as he can but ultimately Kon knocks them both down and is victorious, however, Dubbilex detects KC Superman's arrival and mentally reads his past. Kon represents everything he doesn't, no responsibility, no patience, power at god-like levels...

KC Superman floats overhead with glowing red eyes. He asks Superboy: "Are you SuperMAN... ...or just a CHILD pretending to the mantle?"

Superboy relishes the fight and replies: "Let's find out..."

Dubbilex, Cadmus, a Superboy with a pure heart but lacking the life experience and refinement to be Superman's successor are delivered with such attention to the 'good days' that it shows you just how badly they got it wrong recently up to the killing and cancellation of Kon.

I loved the Dubbilex scenes and Superboy, human, lost and unable to be the hero he knows he can be are so touching.

Then the dome vanishes and an injection of fun arrives along with Superboy's powers. Sure he's hot headed, cheeky, inexperienced, the exact example of an undisciplined Clark Kent if he were without guidance,but it was exactly this that made him a breakout star of Death of Superman. He was so vibrant and full of life and energy. The fact he leaps straight into chasing KC Flash to parts unknown, after hearing a warning from a disembodied voice rather than head back to Cadmus for more tests is exactly what Superman wouldn't do.

Actually far more characterization was afforded to Kon than the Kingdom Come cast and this is a good thing. I'm rooting for the Teen of Steel to win. I loved Kingdom Come but it is so opposite to Superboy's Metropolis that it is almost an allegory for the Marvel and DC cinematic universe - yes I said it.

Was it my imagination or was Nicieza, through the medium of Dubbilex and Kon dialogue poking fun at the Convergence concept? Bravo if so, because I have had the same thoughts!

Art - 4: The art is fun, beautifully rendered but seeing a return to this timeline made me want Grummett & Hazlewood. This was no reflection on Moline's work, unfair of me I guess, as I said Moline has beautifully rendered the story. From the dramatic moments through to the action and splashes, Moline draws particularly evocative panels. Kon's emotional moments dealing with being depowered were amongst my favorites and I LOVED the last page - it made me really want Kon to beat this trio to pulp.

Cover Art - 5: I've been reading Batgirl and actually the parallels from the Cameron Stewart & Babs Tarr book to this Superboy are compelling in fact in the Super universe it is exactly the Kryptonian Ying to the Gotham Yang. Babs Tarr captures the heart of the book and character with ease. A more than worthy 5/5.

Variant Cover Art - 2: Remember I mentioned Grummett & Hazelwood? This cover utilizing their work in such a disappointing way makes it even more of a desire to see their work. I guess I can always do the back issues to marvel in their skill.