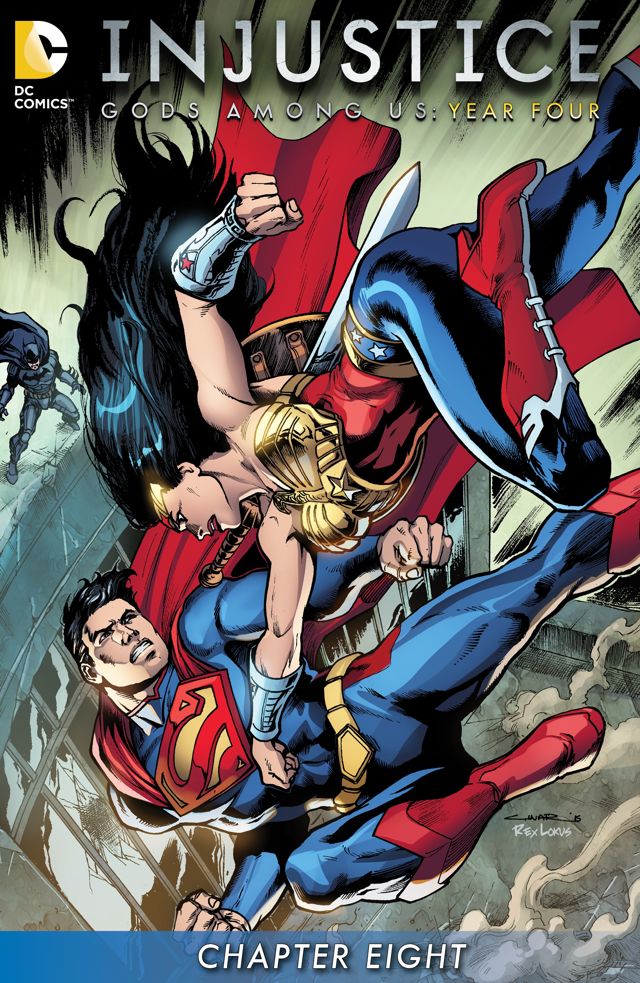 Click to enlarge
In a flash back sequence, Regime Superman speaks with Lex Luthor. Regime is troubled by the "grayer" tones his world has taken. Regime is uncertain of who to trust. Luthor concede's that even Wonder Woman, has a limit, though he is unwilling to go so far for himself. The story returns to the present, where the Batman has chosen Wonder Woman as his champion. Wonder Woman proceeds to try and kill Batman, but Hermes stays her hand. A full-on battle is about to break out, but is stopped by Zeus who demands that the challenge be honored by Wonder Woman. Regime Superman and Wonder Woman resolve to fight to the death. Regime attempts to have Wonder Woman yield, but she gouges his eyes, then breaks his arm.

Story - 2: If you've read enough comics, then you're familiar with the tropes involved in a 'hero vs hero' fight. There's always some contrived situation demanding that the heroes battle each other, and the fight is usually lackluster, with rare exception. This will go down in the annals of yet another boring fight, part I. The abilities possessed by Wonder Woman and Regime Superman, especially with their absent moral code, should produce a striking battle. Instead, it's a rote, two-step, pablum match... with exposition no less. No super-speed, no combat strategy, and worst of all, this is a battle to the death. Why is Regime Superman holding back? This is Regime Superman, killer extraordinaire, and he wants to play light with Wonder Woman of all people? Wonder Woman, who's blood-thirst is exceeded by no man, hence why she's "Wonder Woman". She's going to go berserk and break something.

See, told ya. There have been some very good Wonder Woman vs. Superman match-ups, the two best being by Rucka and Jiminez (Wonder Woman #219, Wonder Woman #175). They applied creativity and imagination to the fight. This? It's just more padding in a bloated, lifeless storyline.

Art - 4: Miller does a great job of making Wonder Woman look like a nut, and Regime Superman a wimp.

Cover Art - 4: I've seen more images of Superman and Wonder Woman fighting in the last two years than in 20. Nice one, though.