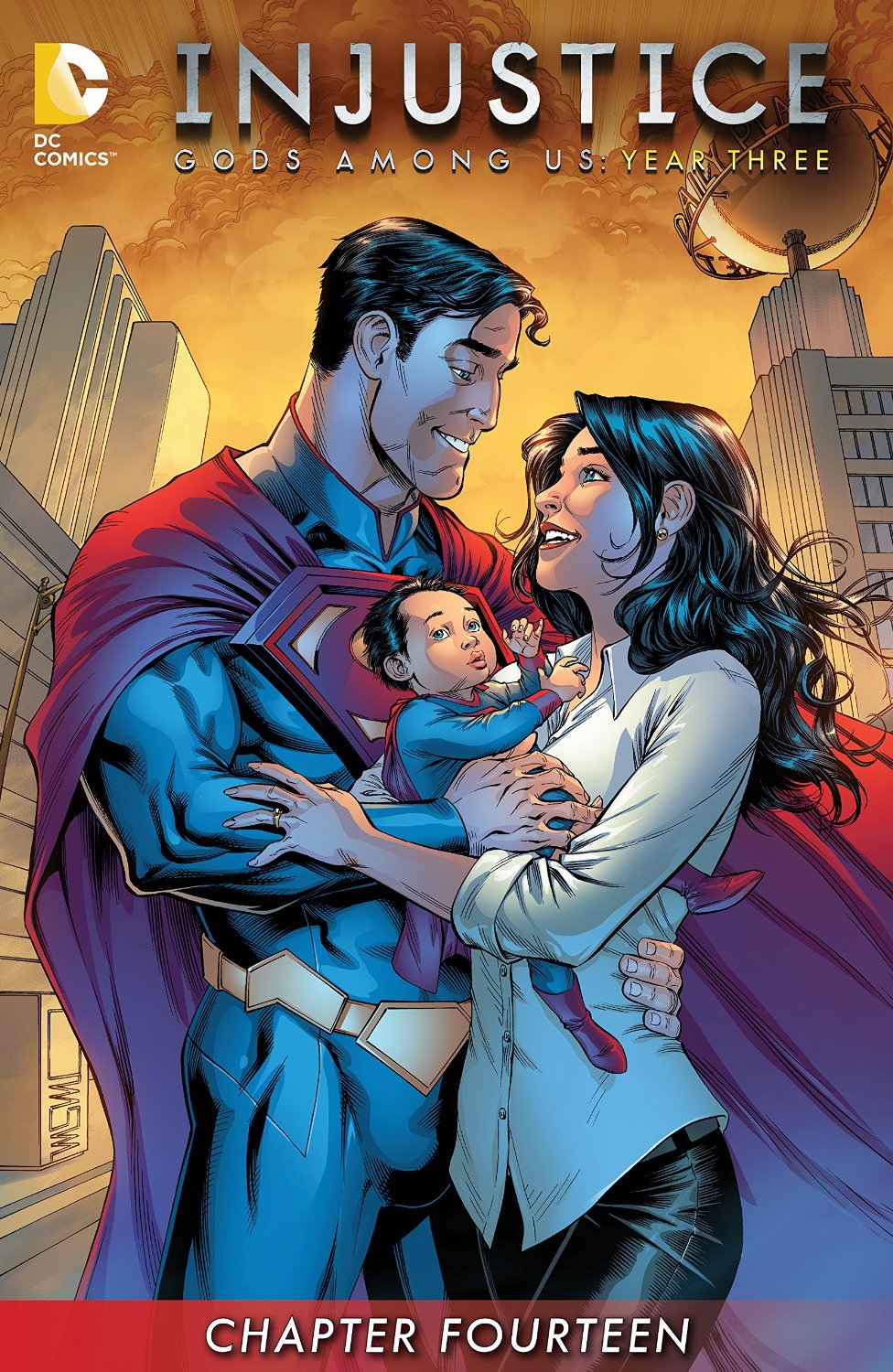 "For the Man Who's Lost Everything - Part 2"

Click to enlarge
Lara Lane-Kent is born and Superman could not have a prouder look on his face. He holds his daughter and remarks to himself how good it is to hold someone without worrying that they will be hurt. Superman then visits Bruce Wayne, who is incarcerated at Metropolis prison. He asks Bruce why he killed the Joker and learns that the Joker was going to attempt his antics again. Superman walks through the wall that separates them, and embraces Bruce for his sacrifice. Superman offers to break Bruce out of prison, but Bruce responds that he needs to do the time. Superman dreams of his daughter growing, taking her first steps, her first flight, and learning to use her powers. She takes up an outfit and we see her in space handling a falling satellite and then fighting animatronic foes. Older, Lara looks on the Earth and sees it pulling apart. She decides to address the United Nations, telling them that it's time to pull together, to work together towards improving the world and ensuring their survival. Her speech is regarded well and later, Superman watches from afar while Lara and scientist aid the planet. Lois comes and see that he's troubled. He says that he wishes they had more time. Lois tells him to block the voices that he hears and stay with her.

Story - 3: Lara is definitely the light of this story, a reminder of the legacy that DC comics has walked away from with books like Injustice and the N52 reboot. Part 2 is a walk, though a hobbled one, through landmarks of Superman moments and history. Krypto, Kingdom Come, Supergirl, Earth Two, Bruce Wayne with Wonder Woman, President Lois Lane, even Lara addressing the UN, all of these acts draw on the rich history that DC has, and that DC has treated with contempt thus far. However, the issue lacks direction, a point, if you will. If Lara is able to convince the Earth that action is needed, one wonders why Superman was not able to do the same. The notion that he is not one of us doesn't ring true, as we have no problem with Superman saving us, so why the issue with saving the planet as well? If the point is show how life would have turned out, if Regime didn't become a "grade B super-villain," the recollection that this is his dream perforates that notion. Perhaps the idea was just to show Superman with grayed temples and the Kingdom Come shield, and thrown in the New 52 outfit for good measure. Perhaps it's to remind us that even now, this Superman is still selfish and incapable of the introspection needed to overcome this flaw that has been thrust upon him. If the Earth needs help, if it's pulling apart, does it not still need Superman's help? No, Lara has it, just like Bruce had it when he killed the Joker.

This installment harkens back to the imaginary stories that filled the Silver Age comic stories, where the future was a bright place to look forward to, and where we as people we're going to get better and make the world the same. Lara represents that hope and brightness of the days yet to come, but, unfortunately, the notion is as false as she is in Regime's mind. There is no future absent of darkness, death, and destruction, not in this world that I've been reading for the last three years. The questions that permeate in my mind, is when did readers collectively give up on a future that could be as bright as we imagined? We have not given up on the technology, medicine, or other advances, but in regards to ourselves as people, there seems to be an embracing of the notion that humans are flawed beings, an idea that is equally defective as holding it up as an ensign for our collective shoulder shrug and resignation. It's a world where someone like Superman should thrive, as people integrally want to pull together, but need to believe, not that we can, but that we should. Superman used to do that instead of think on his own self-interests.

Art - 4: Lois is drawn to look like Oracle, and who is that taking picture? It better not be Jimmy Olsen.