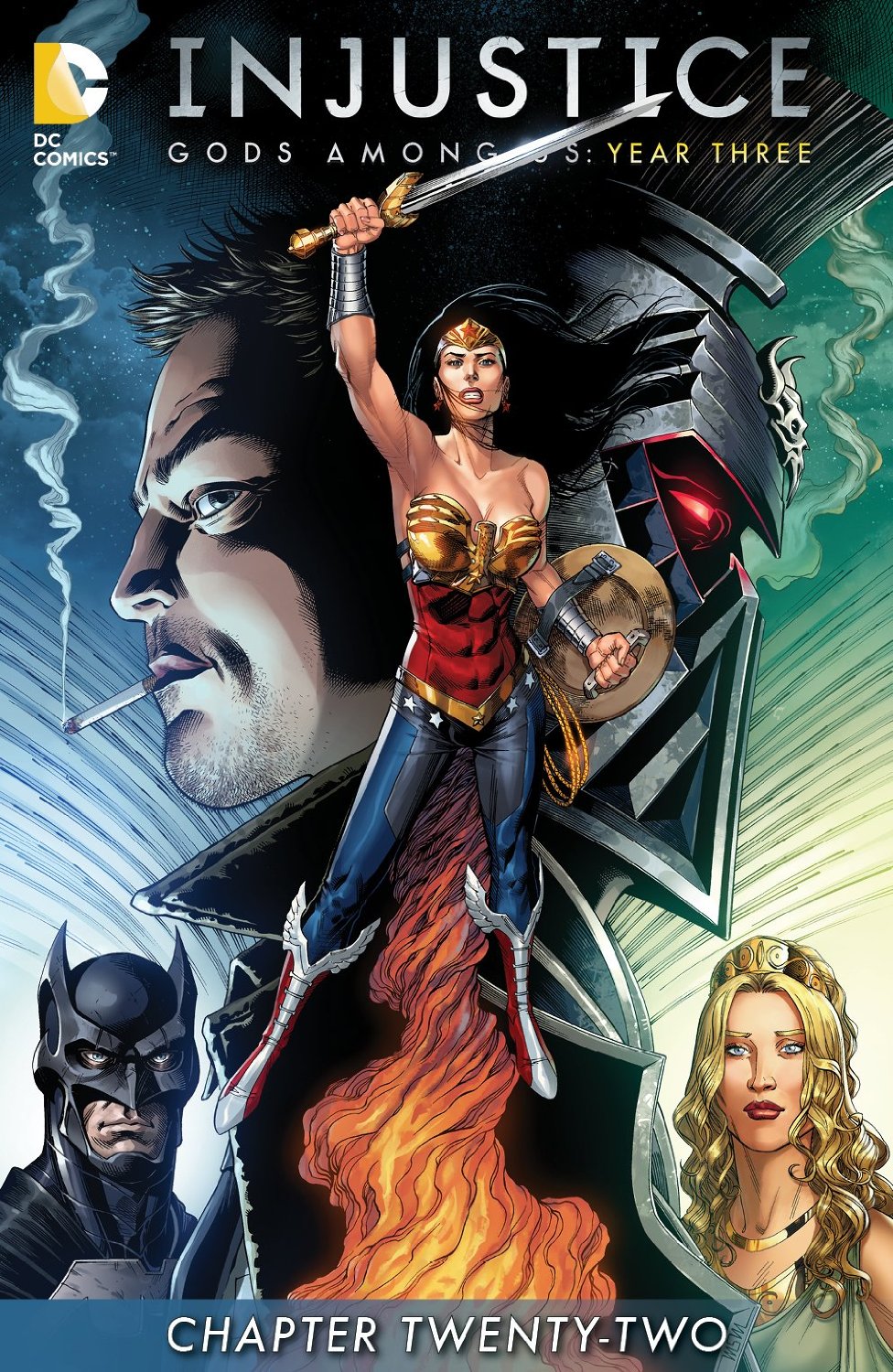 Click to enlarge
The battle between the League and the Insurgency refuses to abate, and while it continues, Hal Jordan has found his captured teammates, leading to a confrontation with Constantine and Doctor Fate. However, Fate and Constantine make Hal aware of the deadly nature of the magic that is in play. Mxyzptlk and Trigon's battle has unleashed magic that is fracturing the reality of the world. Regime Superman and the Batman put aside their squabble to deal with the problem that affects them all. However, the unleashed magic begins to shift them into another plane of existence. A newly freed Flash is able to move fast enough and bring the combatants within the protective confines of the House of Mystery. He succeeds with exception of Swamp Thing, who finds himself displaced in the realm of Trigon.

Story - 3: A ton of the same with this installment, but story was better on the whole. There is actual movement from the rote stance that the book has been locked into for the last few weeks. It would have been curious to see what Swamp Thing and Poison Ivy may have effected with more time, and the thought of Ivy as another exponent, perhaps even an avatar, of the Green is an interesting one. Still, barring that curiosity, she has served no purpose from introduction to being removed in this issue. It seems that the story has just gotten away from Buccellato. Injustice not only lacks a proper sequence to interest readers, it also lacks even the slightest of ideas. Poison Ivy and Swamp Thing working together is the first bit of stimulation in that direction Injustice has had in some time, and it's been extirpated much too quickly... unless continued somehow in the remaining installments. The rest of the story continues the prosaic plodding that the book has become, as it drags on to a single, slow beat that grows fainter and fainter. The 24 issue format isn't helping Buccellato, who will probably become stronger with more time, but today, in this moment, it appears more than he can handle, this weekly schedule of a popular series.

Year Three wraps up in two issues, and it's been a giant step backwards for no decent reason. The largest errors and disappointment are with Regime Superman. While I find the character repugnant, and as someone who connects Superman to Truth, Justice, and the American Way, I believe that's only the natural response. However, Regime was written to be competent, once he embraced his role as a despot. He was self-sufficient, confident, and a force to be reckoned with. In short, a good villain. Buccelato has made Regime Superman a weak, sopping wet facsimile of himself, and for what? Anyone reading the book knows that there is no redemption for him, and no love lost on the Batman. A properly written series would have the Insurgency running for their lives, performing guerrilla strikes and taking heavy losses. There should be a feeling that any moment could be the Insurgency's last. Instead we're given boilerplate superhero fights, which are commonplace and contrived. More on that with the next issue.

Art - 3: An improvement on last issue all around.