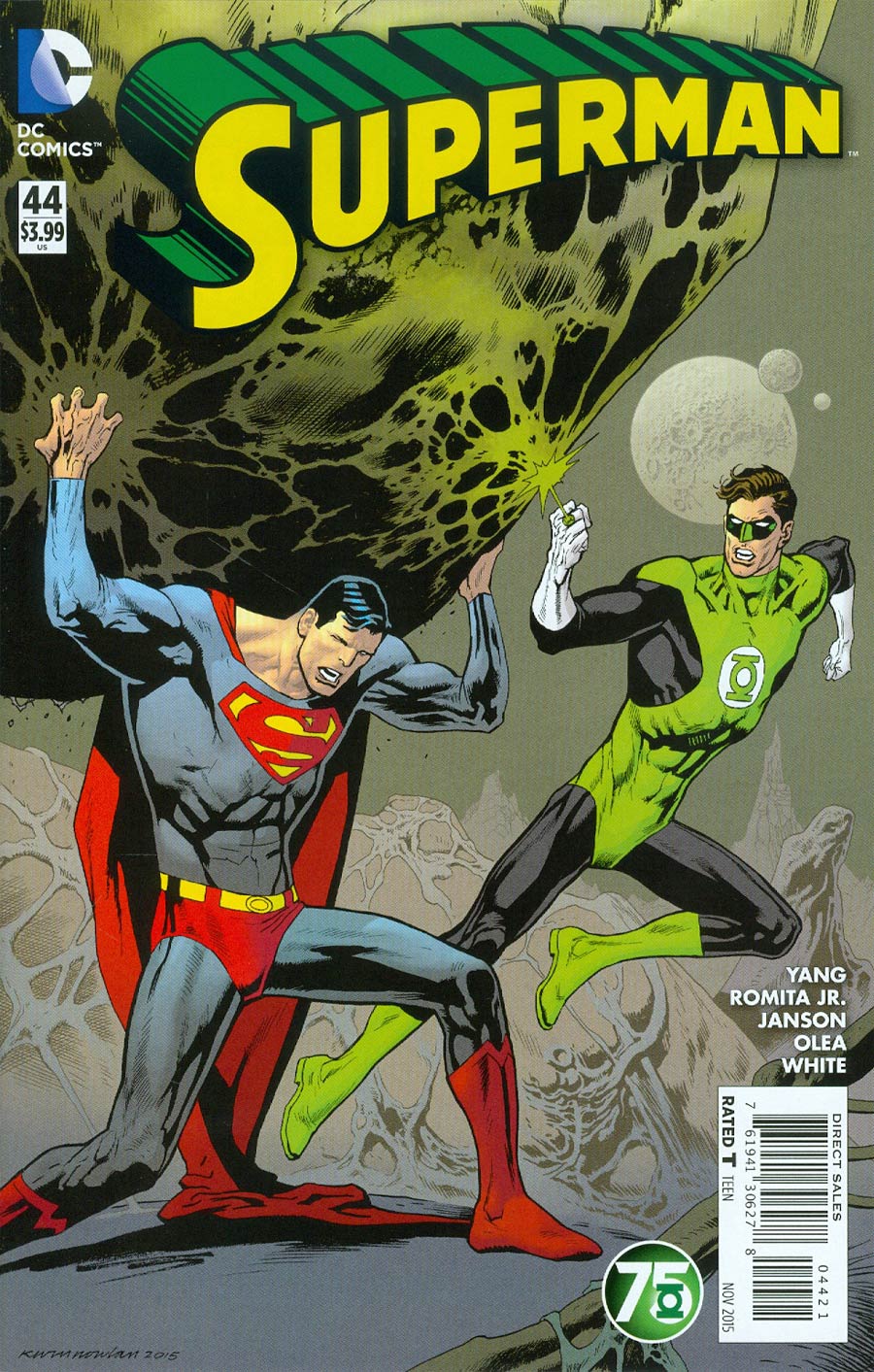 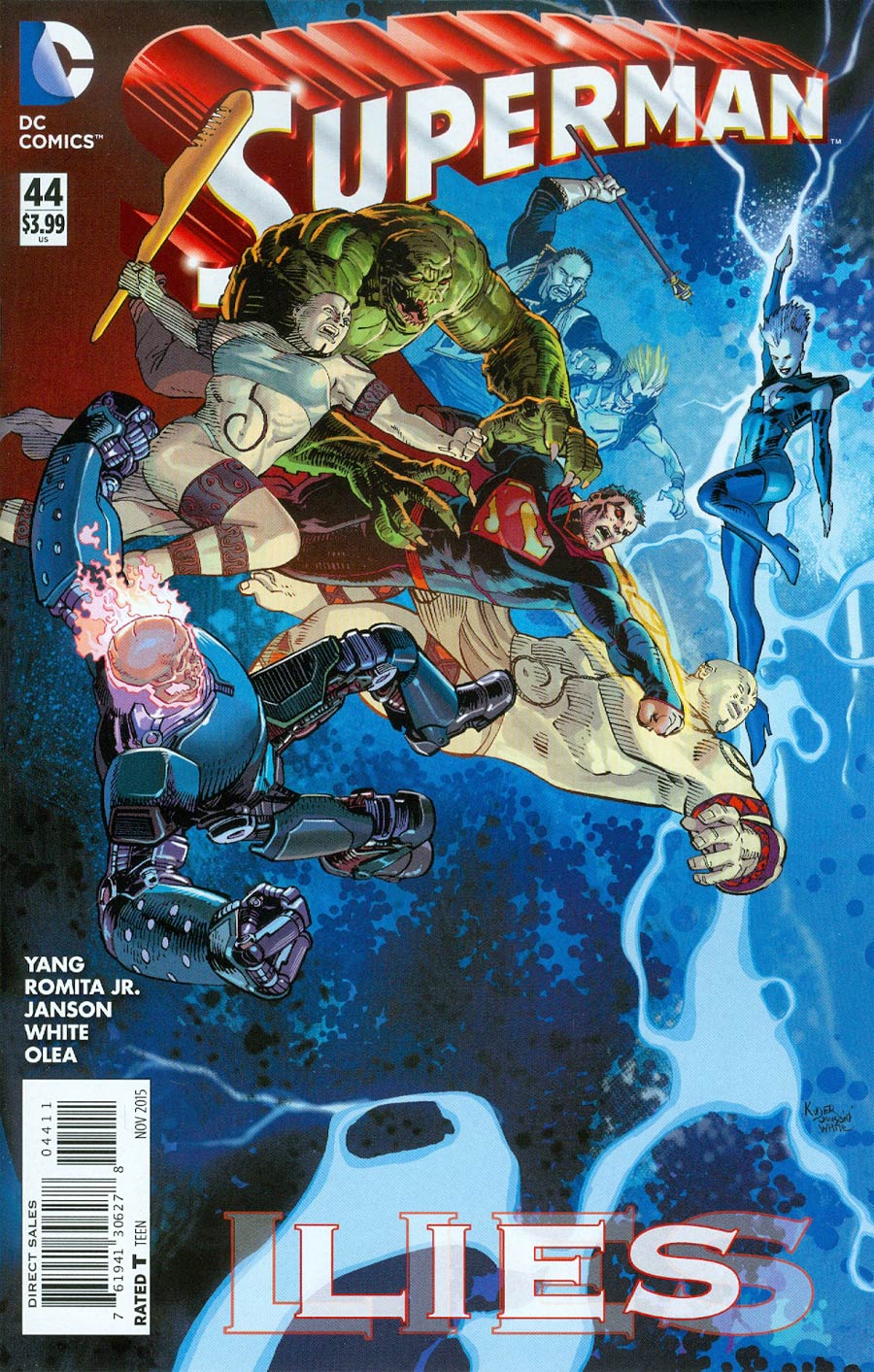 Click to enlarge
Clark Kent is strolling through Metropolis when the Royal Flush Gang attack him now they know his identity. What they hope to achieve is a mystery but they fight Clark and then end up turning on one another till they knock each other out and the police arrive to arrest them. An officer apologizes but explains he must take in Clark too. But as he moves forward to do just that, a bulletin announces that super villains have taken hostages at the Daily Planet.

Livewire, Killer Croc, Shockwave, Killer Frost, Atomic Skull and a mysterious sixth member of this sinister crew have various Planeteers tied up. Clark arrives and tries to take out Livewire but is winded in the fight. Elsewhere Sam and Lois Lane have a heart to heart. Sam expresses how proud he is of his daughter for destroying Clark Kent's life and exposing Superman. Lois is stunned and when news of the hostage situation reaches them she begs for General Lane to intervene and help her friend and the hostages. Two men in black arrive and interrupt them and Lois realizes that if they don't hurry, her colleagues will die.

Clark picks himself up and grabs Livewire using her powers to electrocute the other villains. Killer Frost is knocked out first, then Shockwave is manipulated into taking out himself and Atomic Skull while Clark punches Killer Croc to the ground until he submits and reveals where the sixth villain is waiting with the hostages. The villain unmasks himself to reveal that he is Dylan, a Daily Planet staff member whose wife was killed when Titano attacked the city. Dylan reveals wrist mounted guns and unleashes a shower of bullets on Clark. Clark approaches closer and closer until the ricochets at close range take Dylan out.

With a last bullet he fires a shot to kill Clark but misses his enemy, and the bullet finds itself hitting Perry instead.

Later in the hospital, Perry aggressively challenges Clark as a liar, even going so far as to slap his spectacles off before firing Clark.

Clark dresses in his costume and with Jimmy's help Clark transmits a message across the globe. Just because his identity is no longer secret it doesn't mean his friends and family are fair game and Clark delivers a chilling promise of violence if they are harmed. Lex smirks and sips red wine while watching the broadcast. Lois arrives and points out that 'an eye for an eye' was not how Superman operates.

Clark sneaks away to a motel to find his credit cards have been cut off and uses his spare cash to rent a room for the night. From bad habit Clark uses a peace of sunstone to cut his hair short. A new thug-look to match his new thug-life outlook on life.

Elsewhere, Hordr_Root has downloaded his mind into a very muscular black man. His second, Yurei, who was at the destruction of the Hordr base last month, is not impressed and points out Hordr is driven to impress his mysterious father. Hordr opens a portal to reveal a woman made from the dark shadow matter (seen in Action Comics) smiling that he is going to force Superman into helping him reshape the world.

Story - 1: How do ANY of the attacking villains make sense this issue? Of the huge array of villains in Superman's rogues we get a bizarre mishmash of foes that have no motive for doing so, nor are they really some of Superman's deadliest foes. The only one in a narrative concept that made sense was Dylan, and even he is motivated by a story I would rather have seen than be a throw away line for a story that never happened.

Perry sacking Clark makes no sense - with a failing paper why would you jettison your goose and his golden egg? Ridiculous. Whether Perry felt betrayed or duped or whatever else - the journalist in him would have not allowed himself to throw Clark out.

Next is the threat from Clark Kent. Clark is meant to be at about a 10th of his normal superhuman power level yet he still seems pretty... super. Evidence of this is his taking down random foes. Then we look at the threat he gives... One that without help he can't back up nor, with his character, personality and background, would he ever deliver such a foolhardy speech. Literally seconds after he admits his powers are fading fast - he issues an 'I dare you' to every villain on the planet...

Now more so than ever, 'Truth' is shaping into a completely out of character... poorly researched... poorly written story about a character that is neither Clark Kent, nor Superman.

Art - 1: The art is so vague this issue it leaves you wondering what's going on. Which member of the Flush Gang is beating on who? Where did Killer Frost disappear to? Did Clark deliberately wound Dylan? How did Dylan's bullet hit Perry at that trajectory? Can Superman fly or not? What happened to Killer Croc and Superman's anatomy?

When you have to scrutinize art to see what's going on you really have a problem.

Cover Art - 2: A pretty weak cover to be honest. The opportunity to sell the lame villain attack is wasted and really doesn't evoke excitement in any way.

Green Lantern 75th Anniversary Variant Cover Art - 3: I love the characters here and the designs look visually stunning but the subject isn't dynamic enough for me compared to what they could have depicted to celebrate Hal Jordan's anniversary.