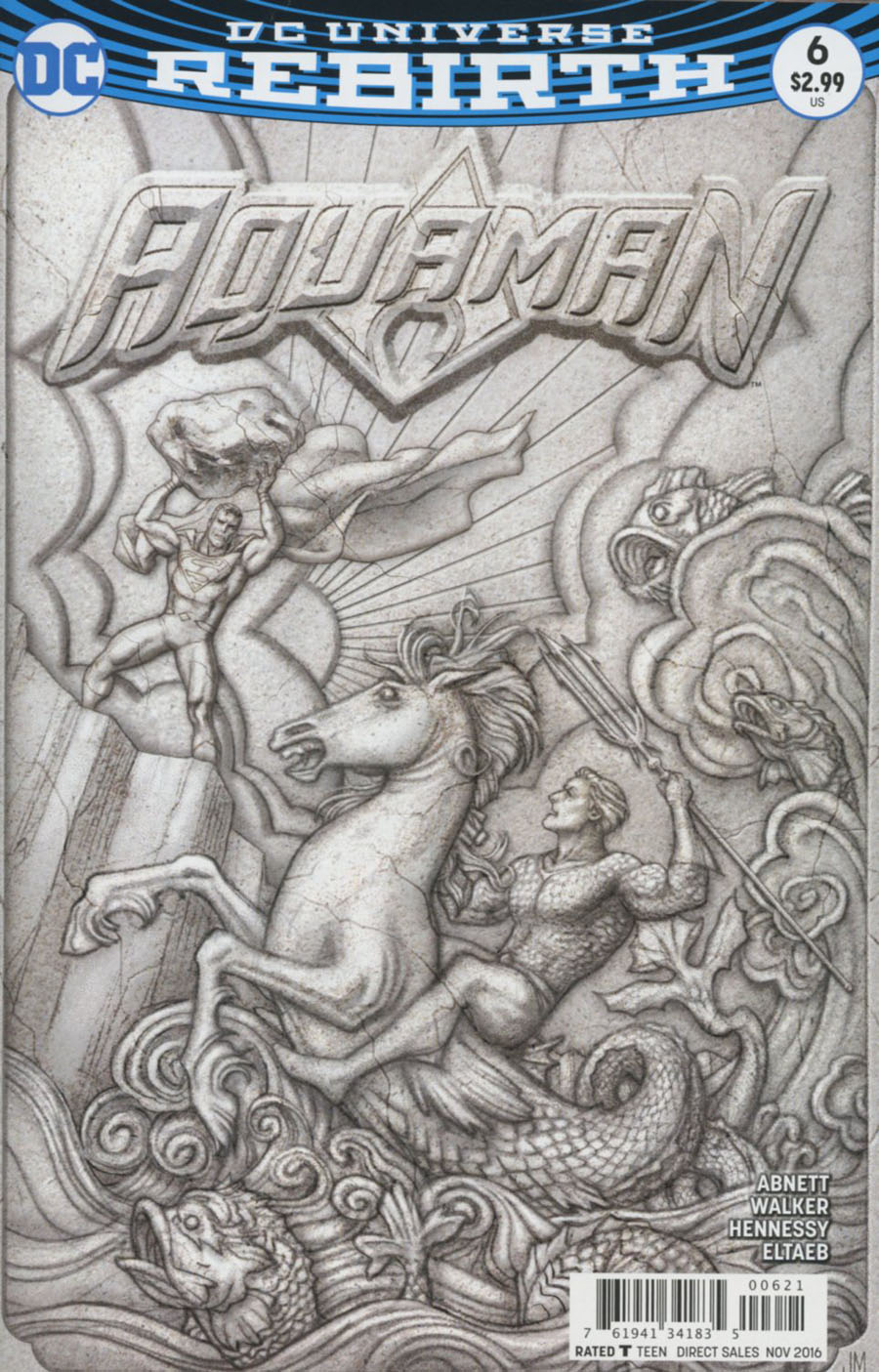 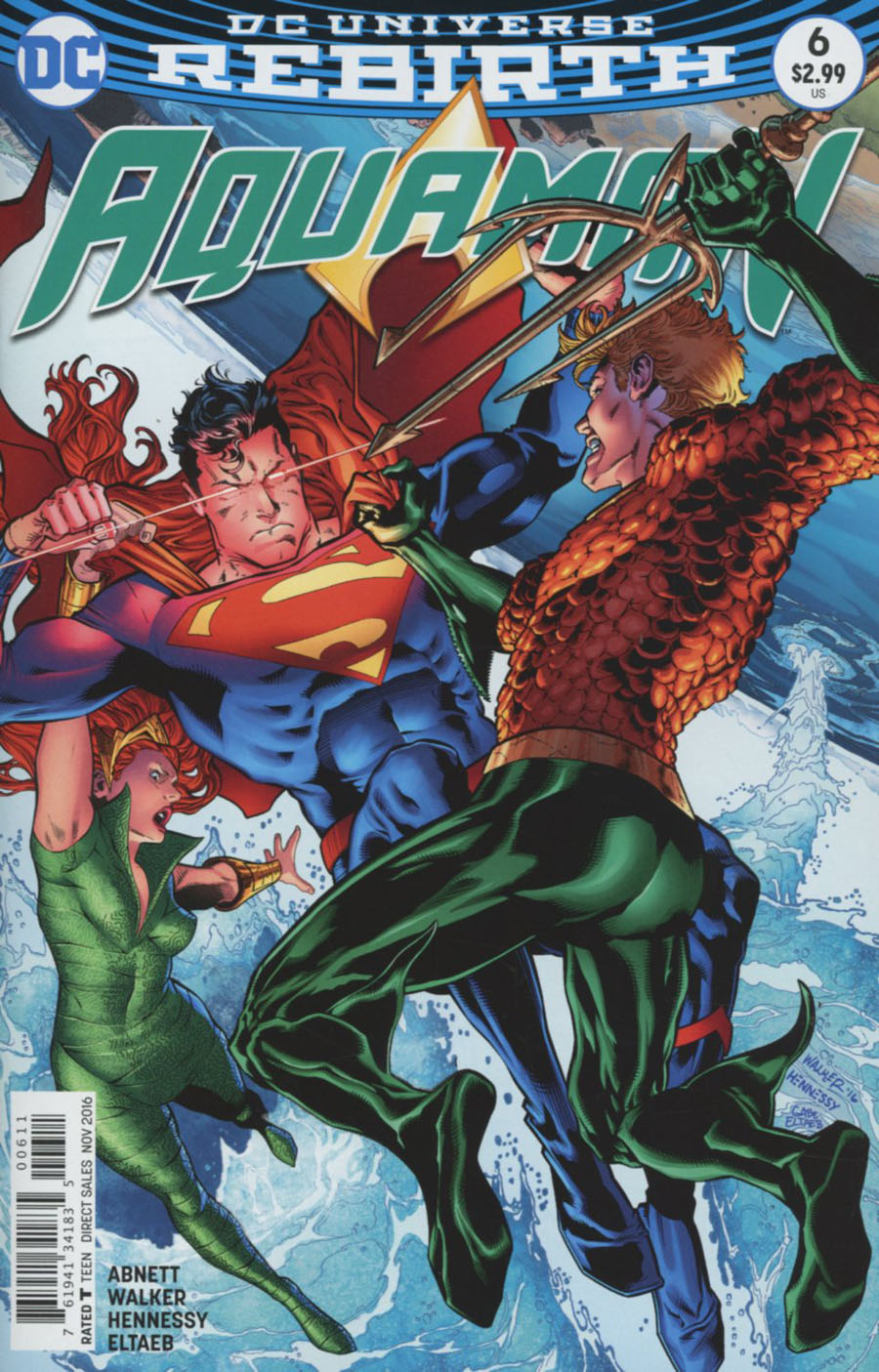 Scheduled to arrive in stores: September 7, 2016

"The Drowning": Conclusion - "Out of His League"

Reviewed by: Mario Bennese
Click to enlarge
Following the events of the previous issue, Superman has been called in to put an end to Aquaman and Mera's battle with U.S. military forces. Aquaman criticizes Superman's decision to intervene, stating that the entire situation is between Atlantis and the United States. Meanwhile, an army of Atlanteans approach Chesapeake Bay to assist King Arthur.

Clark only wishes to help, but officials in the White House Situation Room demand he resolve the issue immediately. Aquaman becomes irritated and insists that the situation does not concern the Man of Steel. Superman tells Arthur that he cannot leave, prompting the Atlantean King to deck the Last Son of Krypton. A fight breaks out between the heroes. Clark continues to offer his assistance as blows are exchanged. Mera joins the fight and sends Superman flying with a mighty punch.

As the brawl continues, Arthur reveals that he feels like he is seen as a "molwark" - an Atlantean word similar in meaning to the term "black sheep." Arthur continues to explain that Atlantis had nothing to do with the attack on a U.S. vessel. The attack of that vessel coincidentally happened the same week that the nations of the land and sea were to come closer together. Aquaman believes that an enemy is attempting to damage his reputation with land dwellers further. Arthur desires a chance to justify his existence as both a king and a hero. The battle comes to a standstill as the Atlantean army reaches the surface. Aquaman commands his army to hold fire and retreat. Before Aquaman and Mera leave, Superman commands Arthur to fix the situation or else.

In Antarctica, Black Manta meets with the leader of N.E.M.O - an organization of villains intent on global domination. Manta is informed that he will be nothing more than a tool for the sinister group. Black Manta then murders the leader and assumes control of the organization.

The issue ends with Arthur and Mera swimming back to Atlantis, both determined to set things right.

Story - 4: I enjoyed this issue, but I will admit that it does not do much in the way of progressing the story. The majority of the issue was Aquaman and Superman fighting and while I am kind of tired of watching heroes go toe-to-toe, there was an actual reason for Superman to be in the issue. Aquaman and Mera were engaged in battle with the United States military, which is essentially a war between the two nations. Prior to the confrontation, Mera had broken Arthur out of jail after a group of rogue Atlanteans attacked a U.S. vessel. There is a great moment where Superman reminds Arthur that even though they are Justice League members, they are not above the law. Though the political dealings of Atlantis are not entirely present in this issue, the events leading up to the fight certainly build nicely. In other words, it's not a clash between heroes just for the sake of moving issues.

The fight itself is entertaining to watch. Oftentimes, people who are not well-versed in comics forget that Aquaman is an incredibly strong character and can hold his own against the likes of Superman. It's a good old fashioned brawl, complemented by Brad Walker's art.

I found Arthur's dialogue during the fight to be particularly compelling. For years, Aquaman has been seen as a worthless character by the public and perpetuated by shows such as Family Guy, Robot Chicken, and The Big Bang Theory. While the topic of Arthur's public ridicule has been addressed in the comics (see Geoff Johns' New 52 Aquaman run), this issue does something a little different: it helps the reader try to understand what Arthur is feeling. Here is a man who has become a mockery to land dwellers, yet rules Atlantis and 66 percent of the planet. Mix in the events of this first arc and Arthur's plight becomes even more compelling. A group of rogue Atlanteans are trying to sabotage his attempts at resolving conflict between nations of the land and sea, which make him appear incompetent. The real kicker comes when Aquaman compares himself to the other Justice Leaguers, and Superman in particular. The other Leaguers are in some capacity respected by the public and it is difficult to smear their image. With Arthur, defamation of character is far more damaging to his reputation as few people respect him. This makes Arthur's frustration with Superman all the more reasonable.

While the issue may not do much in terms of plot development, it certainly makes up for it in its ability to develop Aquaman as a character. Even Superman is given development. He is bound to uphold the law, but he also grapples with his desire to give his friend and colleague a chance to resolve the issue. Superman could have easily been written off as a mindless punching machine or a government lackey. The Man of Steel is written like a three-dimensional character instead of a cardboard cutout opponent for the titular character.

Art - 5: Brad Walker never fails to deliver. From the very beginning, the art on this title has been strong, and this issue is no exception. Action scenes are big and bombastic while softer character moments are given room to breathe. I had the pleasure of meeting Brad at the 2016 Miami Supercon where he had original drawings for sale. Among the pieces for sale, there were pages from this Aquaman series. Even without colors, his art shines. Brad also happens to draw a very good looking Superman.

Cover Art - 4: Like the interior art, the cover is drawn by Brad Walker. While the cover is well-drawn and representative of what happens in the issue, I have to take away one point for the angry heat vision eyes on Superman. I just wish they would move away from that trope already.

Variant Cover Art - 3: The variant cover is drawn well, but it isn't as eye-catching as the standard cover. This cover is also representative of the issue's story, but perhaps a different image might have been a better option. Of all of the variant covers released for the Aquaman Rebirth series, this is by far the weakest.