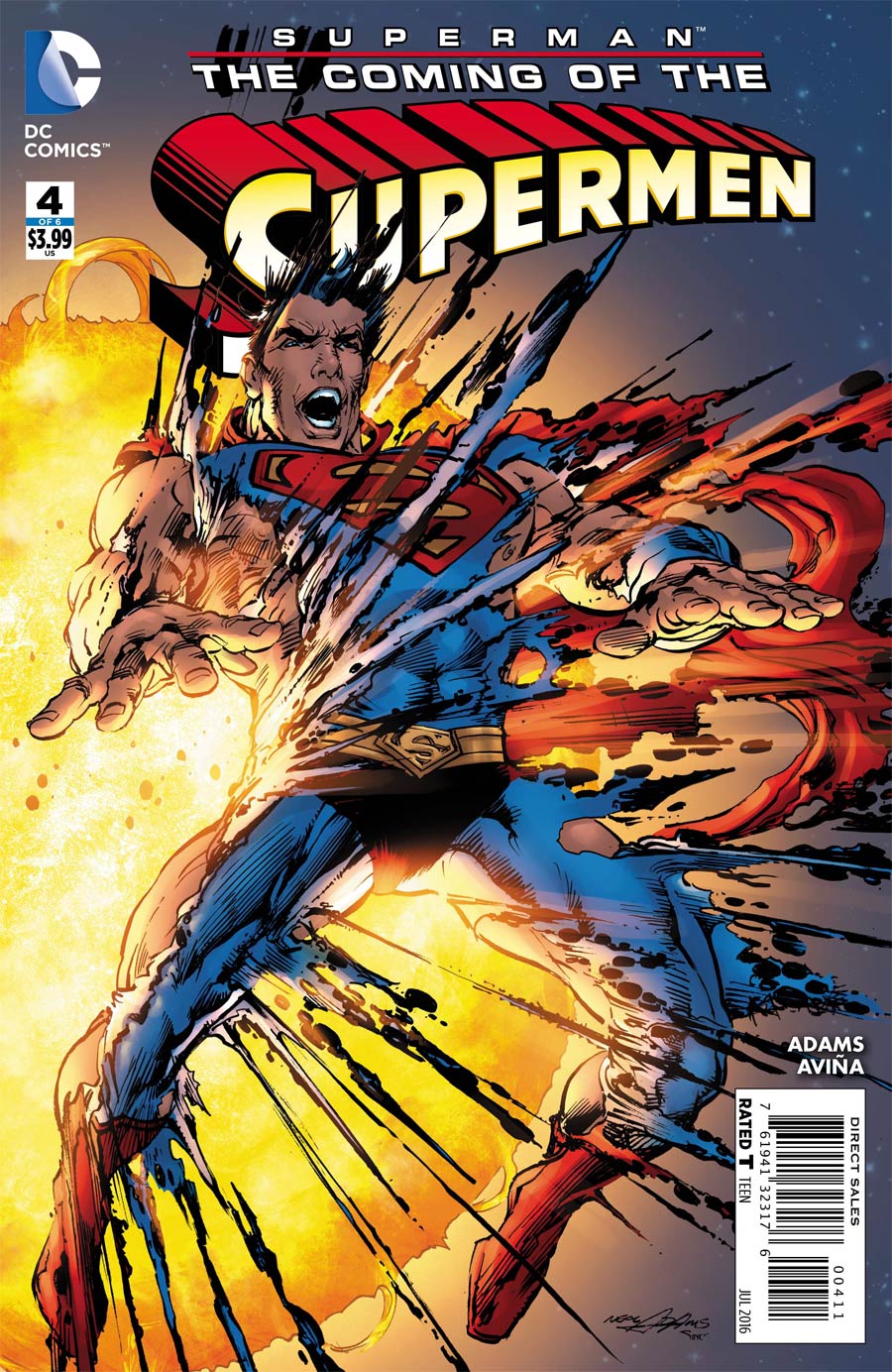 Click to enlarge
We open from where the last issue left off last month. Kalibak is being made short work of, first by Superman, then Orion. Superman and Orion converse afterward. Orion tells Superman that he can take him to Rafi, or he can take him to the launch. Superman asks what the launch is. Orion explains that it is a red sun mote, created by Luthor for Darkseid to turn the sun from yellow to red, so that Kryptonian's could lose their powers.

After learning all this from Orion, Superman flies off into space to the ship carrying the mote and destroys it by flying through it. Unfortunately he is a little too late, as the shattered mote manages to add a false color to the sun, making it orange in a small spot. Superman floats unconscious from the destruction of the ship, as his body shuts down.

Meanwhile on the Apokolips side of New Krypton, Granny Goodness disguised as a kindly old lady attempts to take care of Rafi and his dog Isa, only to revel her true form, and terrify the young child.

Back in space, an unconscious Superman is rescued by Orion, who tells Superman, that he was mostly successful in destroying the mote, save for a small orange spot in the sun. Superman replies that he can feel its effects on himself and will surely have effects on the other Kryptonians.

On Earth, Darkseid and Luthor realize that Superman was able to prevent the mote from changing the sun from yellow to red. Luthor manages to double cross Darkseid this time, by placing him into a barrier/force-field, and manages to knock Darkseid unconscious, threatening Darkseid, to stay away from Earth.

Later, Orion and his scientists have Superman hooked up to some machine, and ask as they blast him with radiation, how much it hurts. The machine seems to charge Superman's cells. Helping him power up from whatever happened in space. Eager to leave and continue his search for Rafi, Superman and Orion leave and head to find the boy. Orion explains, that leaving right now, Superman would not be as strong as a Kryptonian. Superman understands and pushes forward.

At that moment on the streets of Apokolips, Lois runs through following the gargoyle like "Messenger," which leads her to Granny Goodness' place, where through the skylight she sees that Granny Goodness has Rafi hooked up to a similar machine that Superman was hooked up to. Granny calls it the greatest string instrument in the galaxy.

We end with a Boomtube full of Apokolips soldiers falling through calling out the name "Rafi"...

Story - 3: It is still very evident that this issue is a chapter in the larger story that Adams has plotted. It certainly reads that way.

I'm not sure where to start. My main gripe with this series has always been the dialogue, it's so bizarre and out there at times, it barely makes sense in the narrative. Also it's so out of character in places, for example the opening line by Superman:

"Return the boy, you useless animal. Nothing requires you. You make our existence ugly with your presence. Give me the boy or your life is forfeit".

Firstly, those are some harsh words, they do illustrate Superman's feelings toward Kalibak, but I'd never imagine him saying such things.

I know people like to complain about expositional dialogue... But we can sure use some in this series I feel. It may help the story flow better. I had a really hard time following the story with this issue. I don't usually like to be negative, and try to find the good in issues I review, but I'm finding it hard with this one.

However, in hindsight, I can't complain too much... I've read worse comics by Grant Morrison and Frank Miller, with equally as bad dialogue and confusing plots!

Lois again is nothing more than a cameo. As are both Luthor and Darkseid. I don't think we have had enough time with these characters, to really gauge what purpose they serve in this story. Maybe Adams is playing it close to the chest, and keeping things a mystery, I'm not sure. All I know, it's making for a very confusing read so far.

Another gripe, but very minor was when Superman is floating unconscious in space attempting to destroy the mote, Orion rescues him, but also manages to talk with him in the vacuum of space. I know this is the Bronze Age Superman, but still, some rules of science should apply.

I absolutely loved the scene where Superman destroys the ship and mote. It was very epic, and a good reminder of just how awesome Superman can be doing such things, when writers let him!

As I have mentioned in previous reviews, this Superman is quite proactive and gung-ho. Not a pushover or one that would have his butt handed to him by the likes of Batman. It's still quite impressive to see a confident Superman. So thank you Mr Adams for that...

Even though at times, he comes off as a little arrogant.

I also liked the way Orion was written, with his face being soothed by his Motherbox. I really do feel that Adams is trying hard to respect the Fourth World characters.

Lex Luthor one-upping Darkseid was also a treat. Though I'll explain more in the art section, it did seem that Lex has some sort of mental power over the force-field/barrier he used against Darkseid. In his own way, Luthor helping Darkseid was for the betterment of Earth, as he told Darkseid that Earth is off limits.

I'd have loved to give it a higher grade for the story, but like I said, it was an extremely confusing read. And I did not fully grasp the plot, until I wrote the synopsis for the issue. This book is completely up and down like a rollercoaster. There's good, and there's bad. But its Superman, and every so often it gives you that "Wow" feeling... I'm honestly looking forward to the next issue.

Art - 5: Adams provides top notch art, there is no arguing that. Neal Adams is the "Hulk Hogan" of comic artists! He has a larger than life personality, and has done great work in the past, and still somehow continues to impress.

Just look at the double page spread of Superman destroying that ship with the mote. EPIC! TRULY EPIC! Imagine if you will, if it is the size of an Imperial Cruiser from Star Wars... Superman single handedly destroys it!!!

That's what I love about this series... Superman doing what Superman can and should do with his power set. Not moping around like an emo stepchild of Peter Parker.

Neal Adams certainly delivers with the action. Even the head butt Orion delivers to Kalibak early in the book resonated power.

Also just as last month, I love that Kalibak is so huge. Made the battle scenes more grand in scope.

As I mentioned in the story section, Adams pays good tribute to the Fourth World characters, especially this issue, with Orion. I loved the way Adams was able to show Orion's face and the affect mother box has on it.

Another aspect of the art is the familiarity it has with technology; Orion had Superman hooked up to a machine similar to what Granny Goodness does with Rafi at the end of the book. I'm hoping this comes into play later on in the series.

Again as mentioned in the story section Lex seemed to have a mental control over what he used against Darkseid. It was the art that explained this, as there is no mention in the dialogue or narrative.

Tony Avina's coloring continues to impress... However, there was one coloring mistake on page 6 that gives Superman a collar on his suit. Very minor nit-pick though.

Cover Art - 4: Adams and Alex Sinclair get the credit for the cover this issue. The cover is very dynamic, it portrays the impact the sun is having on Superman behind him. The colors also look great and vibrant.