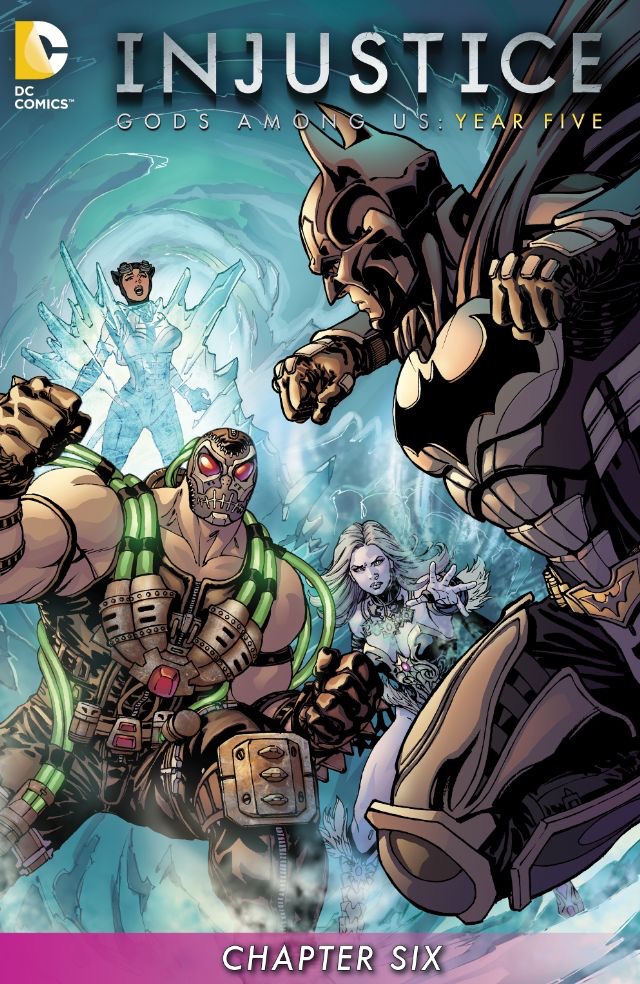 Click to enlarge
Harley Quinn overhears a conversation, and learns that Bane has challenged the Batman to a fight, for Catwoman's life. Bane awaits Batman at Wayne Manor, with a host of spectators who came to watch the fight. Bane and Batman engage, but when Bane hits him, Batman shatters, as he was only a construct of sorts. Bane and Killer Frost contend with Batwoman and Harley Quinn, until Regime Superman and Wonder Woman arrive, demanding to be taken to Catwoman. Unbeknownst to all, Batgirl has located Catwoman, but she is guarded by Killer Croc. Batman arrives via Batmobile to Wayne Manor, stalling for time so that Batgirl can rescue Catwoman, and surprising Regime Superman.

Story - 1: What a waste of time. No true fight, more delaying tactics, and all because there is no story to be had. Why have Bane fight against anyone in the video game, as the result is preordained, hence we have Bane meandering with Batwoman, after he was able to hold Doomsday, and Killer Frost doing absolutely nothing. Injustice is predicated on the ridiculous notion of a fight between Superman and Batman, and all the other fights that "must" take place because of the animosity between them, and even that bit of entertainment has been sucked from the elongated run of this series. In other words, when there are no characters left to be killed, Injustice cannot deliver a competent brawl. Instead, we're subjected to Bane fighting Mirror Master's simulacrum of Batman, and worse, Mirror Master is placed in shadow for secrecy, as if we're too dumb to sort out it's him, after we were already shown that Batman recruited the aid of Flash's rogues gallery.

"Bruce?" Yes, it's Bruce, you moronic nitwit. Why must Regime Superman say Batman's name as if he's uncertain who he is? That dramatic pause is our cue for another lackluster and ridiculous meeting between the two of them, where Regime will have every option and chance to kill Batman, but won't because of "Bruce". The simple-minded reminder that Batman was once his friend, and that you, faithful reader, are being cheated once again. Will he fry him with heat vision from a distance, use super-speed and pummel him, freeze him to a brittle joke? No, we'll be given something altogether insipid and readers will suck it up because of "Bruce". This is your chance, Regime Superman, to set the world to rights. Kill the Batman. No malarkey, no nonsense, no buffalo chips. Get rid of him for good. Pretend he's Green Arrow or Martian Manhunter and end him. End it. Act like the despot you're supposed to be and rid yourself of the annoying rodent that has lived at your leisure for far too long. Or not. Readers will buy regardless.

Art - 2: Another waste. Why is Bane drawn to be bigger than the auto he rests on? So much excess and so little payoff for it.