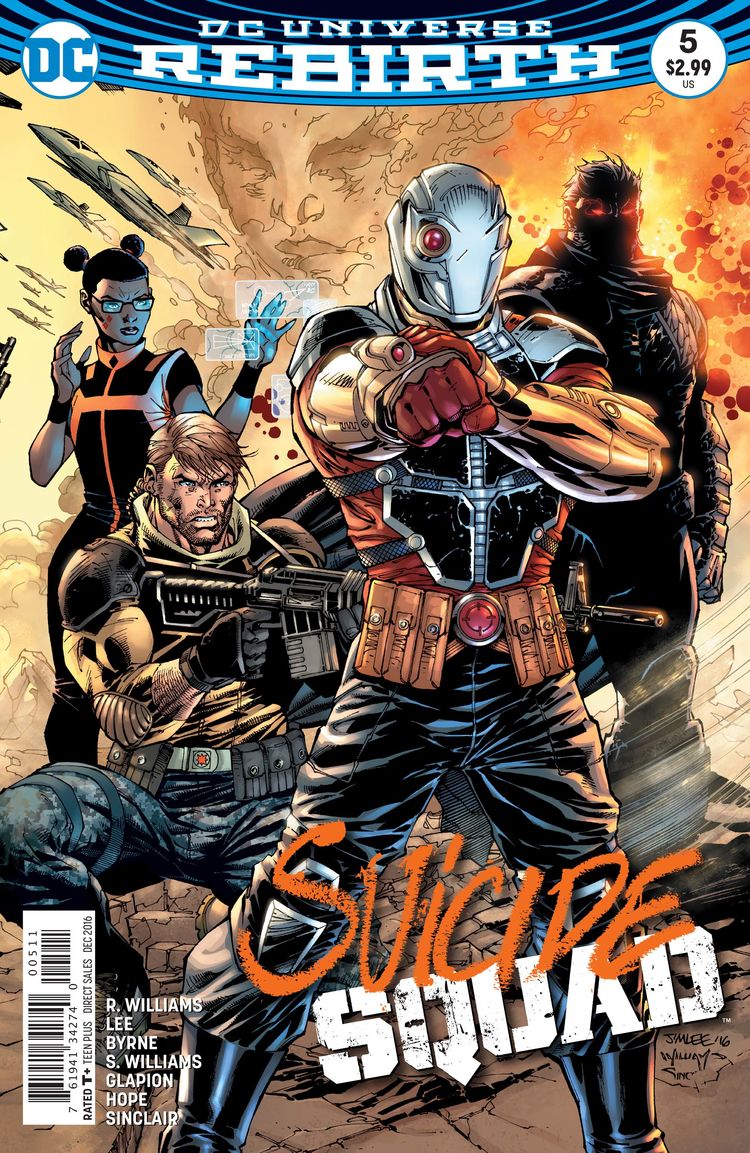 Reviewed by: Keith Samra
Click to enlarge
The Suicide Squad go over their recent mission with Amanda Waller. While a team of scientists study the sphere which is another doorway to the Phantom Zone, currently holding General Zod.

Harley Quinn mesmerized by the sphere almost makes physical contact with it, only to be stopped by Deadshot.

In her cell, June Moon paints a picture, only to realize that the Enchantress influences her everyday life. She talks to Killer Croc, and it's clear that there's an unseen bond between them.

Agent Harcourt, General Flag and Katana observe as the scientist extract Zod from the Sphere. They explain that he has been mutated by it, hence his giant size. Flag expresses his disapproval of what's going on, only to have Amanda Waller tell him that Zod is the ultimate weapon, she intends to control. Flag pulls a gun on Waller and fires...

Story - 4: So I made a big deal last review that they seemingly wasted General Zod... I spoke to soon, and I apologize. I fell into the same trap that I at times criticize others for, and didn't wait for the pay off.

This issue tied up some loose ends and went over a lot about the fist story arc of this series. The explanation that Zod has been mutated by the zone, hence his giant hulking appearance, to the cataloged Phantom Zone access points currently on Earth.

I like the budding friendship between June Moon and Killer Croc, even though I hate that Croc is now almost a mindless mutated animal. I really miss the old, Killer Croc...

Finally I'd like to mention the tone of this book. It wasn't until this issue that I was able to put my finger on it. This book really feels like a 1990s Wildstorm series. Not just because Jim Lee is pencilling it. There are some shades of WildC.A.T.S as well as Team 7. I still like this book a lot, and am looking forward to the Justice League vs Suicide Squad mini series that's coming soon. I am excited to see how Superman will react to Waller having Zod on her "team". Definitely exciting times ahead.

Art - 5: The art is still top notch. But what else do you expect from a Jim Lee book? I love the opening page, and the destruction that Zod is capable of bringing to Earth!

I also loved that Lee has adopted more elements of the movie costumes in the book. Deadshot just looks so much better than the garish chrome metal suit he had been sporting. Now if only he would redesign that helmet/mask.

As I mentioned before, this feels like a Wildstorm book from the 90s. Which is why Jim Lee seems to fit it like a glove. I really can't wait for the trade of this book. I'm still old school. I prefer the tangible copy over the digital any day of the week.

Jonathan Glapion and Sandra Hope help with the inks this time out. But the change in inking styles is not at all distracting from the art.

Alex Sinclair is great as usual with his color palette.

Cover Art - 5: This is a typical Jim Lee cover, of Jim Lee doing what he does best. Issue #4's cover was the cheesecake to this one's beefcake. Other than Hack, all the male characters take the stage, with a heavily shadowed general Zod in the back. I love it!

The Lee Bermejo variant of Killer Croc is good. But a tad misleading.