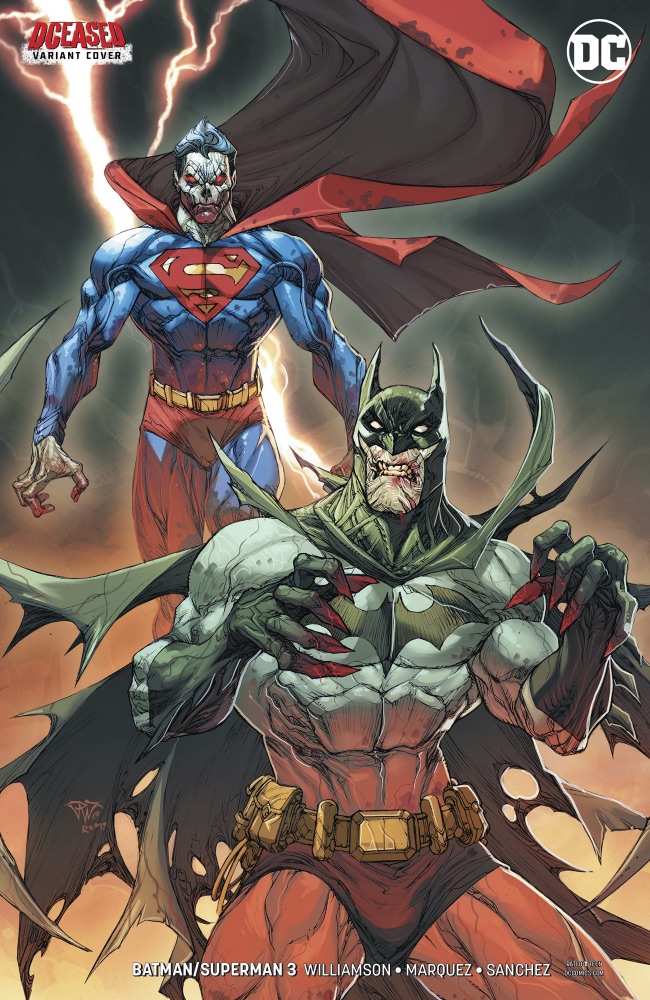 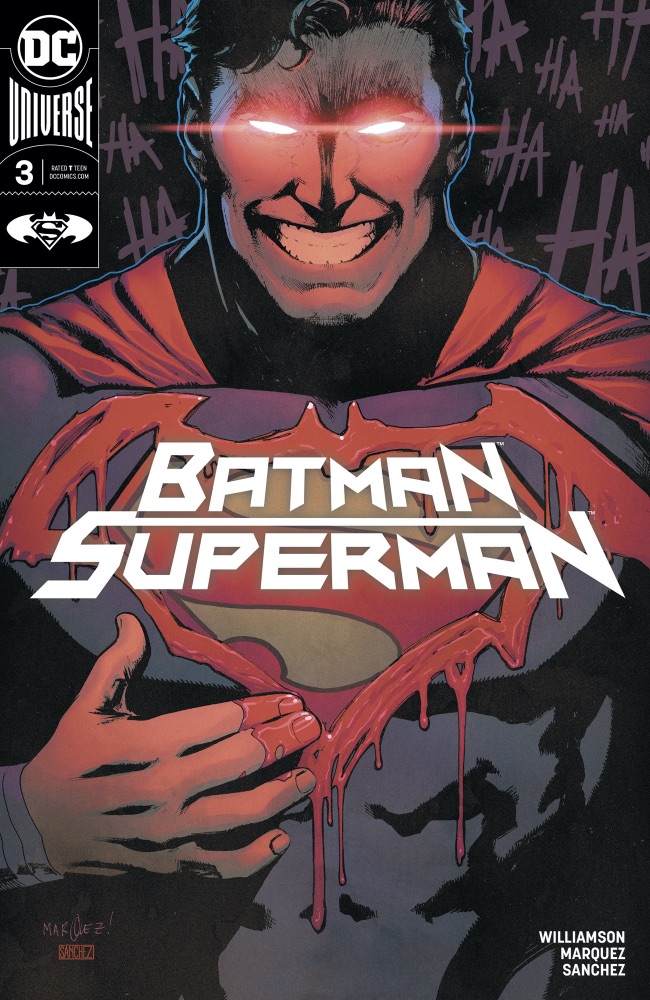 Reviewed by: Keith Samra
Click to enlarge
We pick up from last issue, as an infected Superman breaks the Batman Who Laughs (BWL) out from his cell under the Hall of Justice. We learn that Superman is managing to keep the Joker virus at bay for the moment, as he goes undercover to find out BWL's plans to destroying the multiverse.

We learn that BWL knows about the ruse, and goads Superman into attacking him, in order to truly free him from his prison. Batman stops Superman from possibly killing the adversary, and injects the antidote into Superman's system, and he heads out to speak to Commissioner Gordon. Later we learn that Gordon himself had been infected all along, and attacks Batman, with Superman rescuing him this time.

The two heroes take Gordon to the Fortress of Solitude, to help him recover, only to find the third person BWL has infected. Blue Beetle who had been hiding amongst Gordon spreads a virus to the Fortress computers, and begins his takedown of our heroes. Elsewhere we realize another player has joined the game, one that has opposed BML in the past, and possibly from his Earth. Lex Luthor.

Story - 5: This book is fast becoming a favorite of mine, and I am so glad that I ended up with the reviewing duties of it. Williamson is crafting a much layered story arc, with a mystery at its core, one that has engulfed our heroes immensely, all the while still staying within the wheelhouse of their current continuity playing out in their own respected books.

Last month, I felt that the writing may have stepped down a notch, and the plot wasn't as strong as the first issue, but Williamson seemed to pick the ball up once again, and head full steam back on track (not that he ever fell of, in hindsight).

The long storied trope of "Batman always has a plan and contingencies" had been run to the ground over the last two decades, and here Williamson has managed to keep that tradition alive, by applying it to BWL, as he revealed that he knew all along that Superman wasn't under his control at all. I loved that small detail of how he explained he knew, as the hard light holograms in the Hall of Justice give off a certain smell, which gave away the plan that Superman and Batman had concocted to trick him into revealing those that he has infected with his toxins.

As we slowly learn who The Secret Six are, we are now also thrown a curveball, as we learn that Lex Luthor from BWL world has arrived to most likely appose his plans, and possibly take him down. What's even more intriguing is the fact that this new Lex may possess the powers of a Green Lantern. The final monologue by BWL also revealed that he is aware that someone (Dr Manhattan) is tampering with the multiverse, and that a reckoning is coming. I got so excited at this, as it insinuates that something big is on the horizon for the final issue of Doomsday Clock.

Lastly, I want to commend Williamson on the fact that he is still managing to tell a compelling tale, all the while using the continuity that's come from each of Superman and Batman's own books. This can be a very daunting task, and lesser writers would take a complete different route, but Williamson is really making it work. Also I'd like to mention, that the infected Shazam shows up in the Black Adam:Year of the Villain book, and has a run in with his anti-hero counterpart there. Just for anyone that may be interested in following up that story. All in all, a great book, that seems to be getting more exciting with each issue.

Art - 5: David Marquez is getting better as each issue goes by. I love the art in this book so much, it's become a highlight for me. Marquez doesn't shy away from anything that is called upon by the script, and he does it all with such flair that you need to go back for a second read, just to study the art, at least that's what I find myself doing.

The "Jokerized/Infected" Superman was interesting to see, the huge grin and the tattered cape give us a sense that he is obviously not 100% in control, but it's the intense moments, that Marquez shows us with close ups, that we see somewhat the turmoil that he is going through at the current time, in order to not step over the line. That however culminates beautifully, as we see Superman affected by BWL taunting of him, when he mentions Jon and Lois. There is that awesome panel where we see him give into the rage, and attack BWL. Another panel that really caught my eye, was when Batman discovered that Commissioner Gordon was infected. Loved that shocked look on his face, so animated and dramatic, that it could really only work on the pages of a comic, or maybe animation.

Narratively, we see each panel play out as almost a storyboard, which goes a long way in showing us the subtle moments, and key action scenes. Just take a look as Superman lashes out at BWL, and we see the empty chair which Batman was sitting at, and then witness as he comes to Superman's aid.

I love seeing the fortress scenes, and of course Kelex, but what I loved even more was the viral takeover of the Fortress by Blue Beetle. I also love the awesome designs Marquez has given Batman's vehicles, especially his version of the Batmobile. It looks so much like a Lamborghini crossed with The Tumbler with hints of the Burton Batmobile.

Lastly, As usual, the coloring was fantastic, which really set the tone for the issue, and our two heroes' current crisis at hand.

Cover Art - 3: The concept is solid, but the line work just doesn't speak to me, like I'd want it to. Maybe if Superman didn't have the "angry red eyes", it would have made it look more menacing.

Variant Cover Art - 5: Paolo Pantalena and Romulo Fajardo JR do the honors with the DCEASED variant cover this issue, and they knock it out the park. There is a rather unique Manga/Anime quality to the style, and the colors are stunning enough to get you to pick up the book, even if you're not a DC reader.