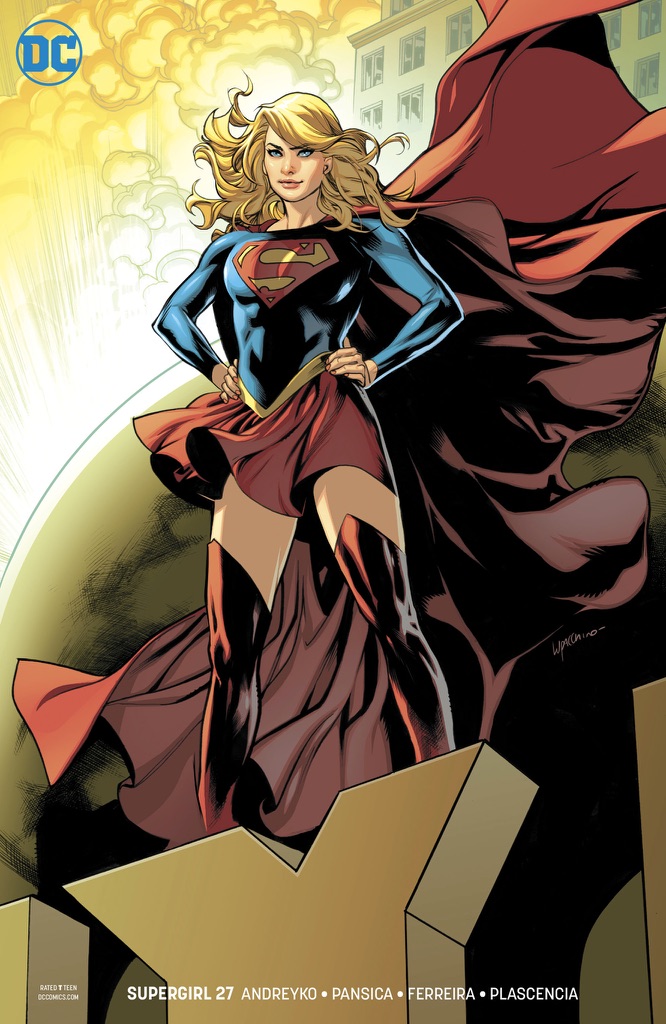 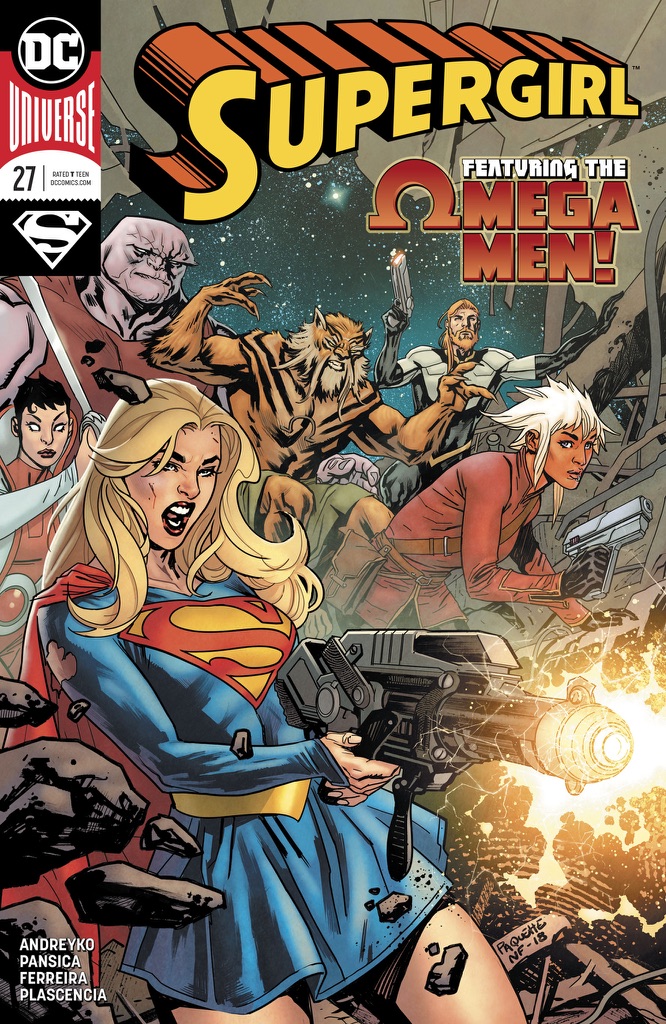 Reviewed by: Adam Dechanel
Click to enlarge
Aboard the Citadel Grand Warship, Kara is severely weakened after the poisoning. Despite the threat she is determined to fight Hokum and his creation Splyce alongside the Omega Men in order to protect the innocent. While the Girl of Steel fights on Z'ndr Kol tends to a weakened Krypto and listens to the angry musings of his adoptive mother.

As Hokum watches in amusement, Kara resorts to a plasma rifle to battle the shape shifting Splyce. The creature has realized her Tamaranean powers could reenergize Supergirl and Hokum wonders if he can create an even stronger creature by splicing in Kryptonian DNA to his creature.

The Omega Men secure an escape craft and load on survivors ready to escape into the Vega system but Kara watches in horror as Splyce murders a child trying to get away.

Despite her tearful anger Kara spares the life of her foe and escapes with the Omega Men.

Z'ndr meanwhile has defied his mother for the last time.

He sees something in Kara and Krypto that his mother clearly does not and by siding with a Kryptonian he endures a savage beating. Krypto, now fully healed, reawakens and rescues Z'ndr and they also escape in a craft.

Kara watches their ship disappear while she tends to the survivors. She also notices a small scar on the neck of some of the Omega Men's friends but by the time she realizes the connection it's too late. They've been double crossed by genetic copies aboard their craft, and aboard the warship Hokum has succeeded in creating an army of warped Supergirl clones to wreak revenge.

Story - 5: Supergirl has been a surprising read.

I'll be honest, as this title's resurgence was billed as a spin-off of 'The Unity Saga', the Rogol Zaar story has had a rocky reception bouncing between that and Clark's family issues. I wasn't that keen for this story to unfold for fear it would be entrenched in that, however I'll admit to my foolishness, as this book has really gone from strength to strength. Z'ndr and Krypto as supporting cast make for great companions and the momentum during the run hasn't let up.

The dips in power make for interesting looks into her character and how she gets by without them. The stakes are much higher and there is a lot less of the soap opera that 'Unity Saga' seems to be mired down by. Of course going full steam ahead has its issues too. Kara and her friends, with the exception of Z'ndr, has had very little character development in favor of big fights. When there is a little respite I hope the quality Andreyko has delivered continues to this level.

A recap and character credits would have been welcome also.

The layouts are great this issue, some panels really burst with detail and genuinely capture your attention. There are moments, such as when, in the story, Kara sees a scar that triggers a memory. I found myself looking for what she sees only to realize it isn't drawn at all. It stood out only to me because it was a story point but it didn't spoil the issue.

I love that the Omega Men are there at her side, as during the action inside there isn't a depiction of this as the fight is in full flow. Kara looks like she means business and this cover definitely shows they are a formidable force and that the stakes are high.

Variant Cover Art - 5: What an iconic look. Lupacchino and McCaig have crafted a really beautiful piece of art for this variant cover.

I love the flowing cape and the solid inks to give it a dramatic effect. I can forgive her standing on the Daily Planet roof because this looks so fantastic but it would be nice to have something from her current earth life depicted. That is a nitpick because other than that this is so inspired.