Before 1986, the character of Superman had become an all-powerful almost god-like person, and Lois remained "galactically stupid." In the original pre-1986 continuity, Clark did not have Ma and Pa Kent to turn to; and back then, it wasn't "Superman is what I do, Clark is who I am," it was the other way around. Lex Luthor wore a futuristic suit of armor. Clark and Lois never fell in love (well, Clark fell in love with her, but the feeling wasn't mutual). Superman and Lois got married in several "imaginary stories," but not once did Lois figure out that the Man of Steel was truly mild-mannered reporter Clark Kent.

Soon, it was obvious that the entire Superman storyline had to be changed. Soon John Byrne, one of the most popular artists in the comic book business, then well-known for his work on The X-Men and The Fantastic Four, was signed to write and draw the comic book mini-series "The Man of Steel," which re-invented the Superman character.

Under Byrne's new continuity, Clark was the true person, and Superman was the disguise. He also became more vulnerable, making him a lot more interesting. Ma and Pa Kent are still living under this new continuity (Can anyone imagine "L&C" without K Callan and Eddie Jones?). And Lois--even though she swooned over Superman in the beginning much like she did in the first season of "L&C," she became the very independent, strong-willed woman we enjoy watching every week. In this continuity Lex Luthor became the ruthless businessman we all enjoyed seeing every week last year.

Mr. Byrne was kind enough to let me do this interview for the Krypton Club newsletter. Before anyone charges "nepotism," I can promise you that Craig Byrne and John Byrne are not related (we both just have really cool names!). Here is the interview, complete and uncut:

CB: Before you revitalized the Superman character, what things did you find to be wrong with him?

JB: He had become trapped by the ridiculously high level of his own power. It was hard to imagine ever being truly impressed by anything Superman did, since he could push planets areound. (What twigged me to this, by the way, was the scene in the first movie in which he rips off the car door to get to Lois; after seeing him push over mountains, the audience cheered at THAT, because it was COMPREHENSIBLE.)

CB: I remember reading in one of your letter columns (it was either in "Superman" or "Next Men," I forgot) that you were introduced to the character through the "Adventures of Superman" series. How would you compare the old 1950's series to the current one?

JB: The old series dealt much more with Superman, of course, even though they had a lower budget. What I liked the best about it -- and what I brought into "my" version -- was the portrayal of Clark Kent. George Reeves interpretation was much stronger and self-reliant than the wimp he was in the comics. Last year when I visited the "Lois and Clark" set, tho, I complimented Dean Cain on his Clark, which is very different from Reeves, but at least as entertaining.

CB: Are you pleased with how "Lois & Clark" is following the comics Superman storyline?

JB: I have seen only a couple of episodes of "L&C" this season, but I enjoyed the fidelity the program showed in its first year -- especially where it picked up on specific points I had introduced, like Ma and Pa Kent still being alive, and Smallville being in Kansas.

CB: Who is your favorite Superman-related character, and why?

JB: Odd question. I suppose, if I am understand this correctly, I would have to say Clark Kent. Clark, as I think my work demonstrates, is to me the "real" character, while Superman is just as red and blue suit.

CB: Would you ever consider writing an episode of "Lois & Clark?"

JB: I'd love to, if anyone ever asked!

CB: Do you think "guest heroes" should be able to appear on "L&C?"

JB: It would be interesting, but probably confusing to "civilian" viewers. When Roger Stern was writing the "Death of Superman" novel he called me for advice, since I have published two novels, and one of the things I told him was to get rid of all the heroes except Superman. I reasoned that most people are not aware that Superman and Batman live in the same world, and certainly are totally oblivious to the likes of Guy Gardner. If Doomsday had to fight something big, I said, have him trash the army and navy before he gets to Superman.

CB: Do you prefer the comic Superman to have short hair, like on L&C, or long hair, like in the recent comics?

JB: Oddly enough, the long hair in the comic seems to have been inspired by the long hair Dean Cain sported when "L&C" debutted. Of the two, I prefer the shorter, since the long hair somehow underlines the stodginess of the costume.

CB: Do you think Lois will say "yes" to Clark's TV proposal, like she did in the comics?

JB: I hope not. Having Lois and Clark engaged has eliminated a vital element - sexual tension - from the series.

CB: Have you ever been tempted to draw the Superman comic again?

JB: We have talked about some more Superman projects. Ideally I would be looking for something somewhat divorced from the ongoing continuity, something in which I could acknowledge what was happening in the other books without actually having to participate.

CB: Is it true that Doomsday will be in an upcoming issue of Wonder Woman? Will Superman be along for the ride?

CB: Do you see any flaws in the "L&C" series that you think could be improved?

JB: I think Teri Hatcher should appear totally nude at least three times per episode. Otherwise, I have no complaints. [Hey! He sounds like me! --Craig]

CB: Are there any specific characters from the comics you'd like to see on "L&C?"

JB: I'd like them to have used Maggie Sawyer, since they did introduce a tough lady cop, but under another name. And it would be fun to see them extrapolate the relationship I began to espablish between Superman and Jimmy's mom. Plus, Morgan Edge might be fun. [Note: Morgan Edge was replaced by "Bill Church" for some reason in the "L&C" storyline --Craig again]

CB: What has your favorite "Lois & Clark" episode been?

JB: None of them stand out as whole episodes. Mostly I remember bits and pieces, nice set pieces and characterizational bits from different shows.

CB: What comics will you be working on in the near future?

JB: As of two weeks ago I have a green light from Marvel and DC to do a Batman/Captain America crossover, but this is not even close to being on the schedule. Beyond that, Paul Kupperberg and I have discussed resurrecting the Doom Patrol.

You can find comics by John Byrne in every good comic book store. He is still one of the "fan favorites" of comics that consistently puts out good comics. He begins his run writing and drawing the "Wonder Woman" comic starting in July. He will also be doing a "Darkseid/Galactus" crossover for Marvel Comics and DC Comics. You can also find John Byrne's work in the "Lois & Clark," "Man of Steel," and "Next Men" trade paperbacks. Thanks again Mr. Byrne for this great opportunity.

(this interview was originally published in The Krypton Club Newsletter #11 on June 1, 1995)

The Superman Homepage has had the pleasure of interviewing various Superman Comic Book creative people about their work. 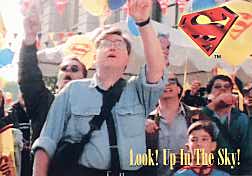 When “Lois & Clark” started production in 1993, there was an obvious relationship between the comic book people and the Hollywood people.

A trade paperback “Lois and Clark: The New Adventures of Superman”, was published, with Dean Cain and Teri Hatcher on the cover. It included reprints of comic book stories that were the inspiration for “Lois & Clark”, helping to define the characters. Comic's included are: The Story of the Century (Man of Steel miniseries #2), Tears for Titano (Superman Annual #1), Metropolis - 900 mi (in SUP #9), The Name Game (SUP #11), Lois Lane (in ACT #600), Headhunter (AOS #445), Homeless for the Holidays (AOS #462), The Limits of Power (AOS #466), and Survival (ACT #665).

A number of comic book writers and artists had roles as extras in the episode “I'm Looking Through You” (Season one, episode 4). Their presence was immortilized in the Sky Trading Card #34.

Craig Byrne, president of the online “Lois & Clark” fanclub The Krypton Club, carried out a series of interviews with comic book writers. The interviews are reprinted with permission of the Krypton Club.

Check the Television section of this website for some “Lois & Clark” Interviews conducted by The Krypton Club.

DISCLAIMER: SUPERMAN and all related elements are the property of DC Comics. TM & © 2022