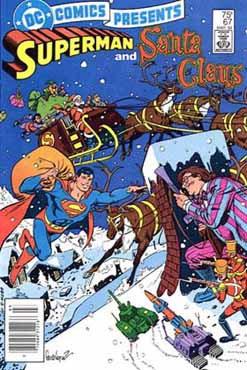 'Twas the Fright Before Christmas

It's the night before Christmas, and Superman is flying over Metropolis when he spots a young kid trying to hold up a charity worker on the street. Superman swoops in to investigate, but the kid only has a toy gun, and is not a threat to the worker. However, when Superman inspects the toy gun with his X-ray vision, he finds that the gun actually has a hypnosis device built into it, and that the gun has hypnotized the boy into trying to hold up the charity worker.

Superman flies the boy to the North Pole and his Fortress of Solitude, where he breaks the hypnotic spell on the boy. The boy is Timmy Dickens, he tells Superman that he checked the hall closet where his parents hid his Christmas presents, and that is where he found the toy gun, as well as a toy ship he has on him. Using his super-hypnosis on the boy, he finds out the gun hypnotized him to steal money and deliver it to the local Big Shott Toy Store. Superman realizes then that his old enemy, Winslow Shott, aka the Toyman, is behind Timmy's hypnosis, and that the Toyman has sold lots of other hypnotic toys, so that unsuspecting kids will go on a stealing spree for him Christmas day.

Superman bundles Timmy up in his cape for the flight back to Metropolis. But they haven't gotten far when Timmy's toy ship shoots a beam at Superman, which makes him fall from the sky. Superman deftly gets himself underneath Timmy, protecting Timmy from the fall, and then passes out. Tommy shakes Superman to wake him up, worried that they will both freeze to death, when some of Santa's elves show up and carry Superman off, with Timmy following.

Meanwhile, back in Metropolis, the Toyman has been monitoring all of this via the remote camera he built into Timmy's toy ship. His camera has stopped working at this point, but he is happy with his success. He gloats about how he found a meteorite laced with White Dwarf-Star matter on sale as a paperweight. Then he used his genius to transmit that high-gravity energy through his deadly toys, causing Superman to fall from the skies.

Back at the North Pole, Superman wakes up to find himself lying in a bed surrounded by elves and Santa Claus. Santa introduces himself, and Superman finds it hard to believe that he never saw Santa's workshop before while flying over the North Pole. However, Santa says that nobody can find his workshop unless he wishes it. Santa and Superman then head into Santa's hi-tech communications center, where every boy and girl in the world is monitored to see if they've been naughty or nice. Then they walk through Santa's workshop, where all the toys are made. This reminds Superman of an old toy he had while he was a baby on Krypton, a thought projecting device. Unfortunately that toy was destroyed when Krypton exploded.

They quickly reach Metropolis and land on the roof of the building where Santa's monitors tell him the Toyman is hiding out. Superman flies down the chimney and crashes in on the Toyman's lair. The Toyman orders his robotic toys to attack Superman. While Superman would normally beat the toys with no trouble, some of them are armed with a small amount of Kryptonite, making it difficult for him to beat them. Fortunately, Santa comes down the chimney as well, and releases his good toys to attack Toyman's evil toys. With the help of Santa's good toys, Superman is able to beat the Toyman, who is led off by the police. Superman then finds the Toyman's list of everyone who bought his hypnotic toys, and using his super-speed, he rounds them all up. He then returns to Santa and Timmy, to thank Santa for his help in capturing the Toyman. At that moment Timmy's toy ship fires off another gravity beam which hits Superman.

Superman wakes up to find himself lying in the snow at the North Pole, with Timmy huddled over him. Superman is confused, and wondering if his encounter with Santa Claus was all a dream. He flies Timmy home, and then goes to Clark Kent's apartment. He goes to remove his street clothes from his cape pouch, and finds something else in there as well. It's his old thought projector from Krypton, the one that was destroyed. It projects an image of Santa Claus wishing Superman a Merry Christmas.

Story - 4: Why you ask am I giving this story a rating of four? On the face of it, the plot is absurd. The Toyman finds white dwarf star matter on sale as a paperweight??? Superman X-rays Timmy's toy gun but doesn't think to X-ray Timmy's toy ship???? The battle of good toys vs. evil toys??? This comic probably never won any awards for best writing, so why then am I giving this story a four??? For the very simple reason that this is a fun comic. It's not meant to be taken seriously, unlike way to many of the Superman comics being published recently. This issue strives to be a lighthearted Christmas story, and in that respect it succeeds admirably. Superman is in character in this issue, and acting like the hero he is in spite of the somewhat absurd situation he finds himself in. What makes this issue of DCCP 10 times better than any issue of "Adventures of Superman" written by Joe Casey is that it has personality. And like Samuel L. Jackson said in the movie, "Personality goes a long way..."

Cover Art - 3: Jose Luis Garcia-Lopez drew a fairly standard cover for this issue. If only Curt Swan could have drawn the cover as well.