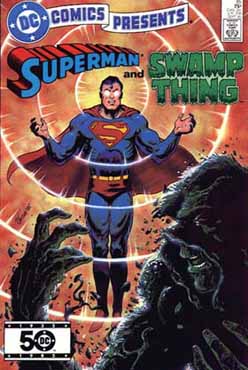 Superman and Swamp Thing in: "The Jungle Line"

The comic opens with a car being driven south along I-55. Clark Kent is driving the car, and it looks like he has seen better days. He is feverish, sweat is poring down his face, and he hasn't shaved in days. He is apparently hallucinating as well, causing the car to swerve along the highway. On the passenger seat next to him is a rock with a small red fungus growing on it. The Man of Steel is sick and dying. He hallucinates back to the events that started this.

He and Lana are at a news conference. A scientist, Dr. Everett, is displaying the same rock that is in Superman's car, and it is revealed to be a meteorite and the fungus growing on it is extraterrestrial. While such a find would be monumental in the real world, in the DC Universe contact with aliens is commonplace, and this isn't a big event. Clark scans the fungus with his telescopic vision, and from a magnified level, the fungus looks like a scarlet jungle. He quickly recognizes this fungus as being from Krypton. It is the Bloodmorel, which used to grow in the scarlet jungles of Krypton, a fungus that prefers to grow in blood, causing fever, hallucinations, overexertion, and in 92% of cases, death.

The very next day, Clark experienced his first bout of incapacitation when he got a paper cut. His invulnerability returned, but then he lost his X-Ray vision. With his powers cutting in and out, that night he started to hallucinate. Realizing he's been infected, he borrows the meteor rock from Dr. Everett so that he can examine it. Unfortunately his microscopic vision cuts out on him, preventing any analysis. He realizes then that he is probably going to die, and wants to die alone. So he buys a secondhand car and starts driving south, which brings us back to the present.

Clark passes out at the wheel of his car, and it flies off the road, crashes, and explodes. Clark staggers out of the car carrying the meteor rock, his clothes on fire. He is hallucinating that he in the scarlet jungle of Krypton. He gets a good distance from the burning car and into the swamp before tripping over a tree branch and collapsing.

At this point, Swamp Thing arrives on the scene, having been drawn by the explosion. He wonders who Clark is, and why he isn't dead from the explosion. Meanwhile Clark is dreaming that he is in the Scarlet Jungle of Krypton, where the dead beasts of the jungle tell him that he should have died with Krypton, and that it is time for him to join them in extinction. Naturally Clark fights back.

Swamp Thing meanwhile has found the meteor rock, and makes contact with the fungus growing on it. He quickly realizes that it is alien and pulls back from it. He then turns back to Clark, and brushing away some of his burned clothes, finds the Superman costume underneath the street clothes. Superman wakes up, but he is still hallucinating, believing that he is fighting the scarlet jungle beasts. He uses his X-Ray vision to blast a hole in Swamp Thing's chest, and then turns to the swamp and starts destroying it with his powers.

Swamp Thing realizes that the fungus is causing Superman to overexert himself, and that he will kill himself if he doesn't stop. Swamp Thing realizes that he needs to calm Superman down. He picks up the meteor rock in one hand and makes contact with the fungus. He puts his other hand on Superman's shoulder, and enters his mind. At first Superman thinks Swamp Thing is another Phantom, and destroys his hand. The hand regenerates, and Swamp Thing tells Superman that he is a friend, but Superman is delirious, and punches Swamp Thing some distance away. Superman advances on Swamp Thing to attack him again, but Swamp Thing continues to talk, telling Superman that he is burning up, that the fever is pushing his weakened body beyond its limits. This strikes a cord with Superman, as he remembers that the fever causes death by overexertion. Swamp Thing convinces Superman to rest, even though his every instinct says fight. Once he's resting, Swamp Thing is able heal Superman with his green touch.

Once healed, Swamp Thing leaves Superman sleeping in the forest. Superman wakes up the next morning and finds himself healed and back at full strength. He cleans himself up and picks up the meteor rock, which can no longer harm him. As he flies off, Swamp Thing watches him go from a distance.

Story - 5: This is one of three Superman stories Alan Moore wrote for DC, the other two being the famous "Whatever Happened To the Man of Tomorrow" and "For the Man Who Has Everything" from Superman Annual #11. This story isn't quite as good as those other two tales (of course, the other two rank among the best Superman stories ever written), but it is still 10 times better than your average comic. The genius of Alan Moore has been written of numerous times by numerous people, so trust me when I say that this is an excellent story well worth acquiring at whatever the cost.

Art - 5: Rick Veitch does an outstanding job here. He does an excellent job in portraying a sick and feverish Superman. His delirious Superman is truly a frightening thing to behold.

Cover Art - 5: You know this comic is going to be something different when you look at Rick Veitch's cover. Here Superman looks like a wrathful angel, intent on destroying Swamp Thing. If the purpose of the cover is to draw you in to the story inside, then this cover absolutely succeeded.