Click to enlarge
This tale was split into three parts about Kryptonian's escaping the bottle city of Kandor and it featured the first appearances of Nightwing and Flamebird.

Kandor was the capital city of Krypton, but before the planet was destroyed, Brainiac shrank the city, encased it in a bottle and placed it among the other bottle cities he had captured.

As this story opened, many men with the same powers as Superman began stealing components from science labs and rocket ships. At the Daily Planet, Lois, Jimmy and Perry White discussed that Superman was off helping Supergirl in space while the raids took place. When Superman returned, he fought several of these superpowered criminals and discovered they were evenly matched.

Superman realized that they could only have come from Kandor, so he picked up Jimmy Olsen and flew to his Fortress of Solitude where they zapped themselves with a shrinking ray. As they entered the bottle city they were met by Nor Kann, a scientist who knew Superman's Kryptonian parents and had discovered that another Kryptonian, Than Ol, was responsible for expanding Kandorian citizens to full size in order to steal from Earth.

In his shrunken state, Superman had no powers. The Kandorian's attacked him and Jimmy on sight, yelling that he was purposely keeping them small in the bottle. As they escaped into the bordering forest, their pursuers unleashed telepathic hounds that chased them. They made their way back to Nor Kann's home and discussed disguising themselves like Batman and Robin do so that they could help the Kandorian's without being attacked. Nor Kann suggested they name themselves Nightwing and Flamebird after two Kryptonian birds in his arboretum and wear clothing that matched each bird's colors. 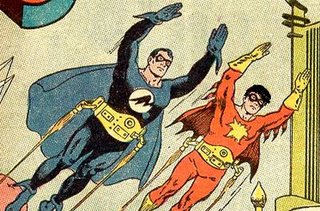 Donning their new costumes and flightpacks, Superman and Jimmy Olsen, disguised as Nightwing and Flamebird, attacked Than Ol's secret base, where they learned the enlarging ray only moved an object's atoms farther apart instead of increasing their masses. The enlargement would only remain stable for a few hours.

Soon, Superman enlisted the help of Van Zee and Sylvia who were Kandorian doppelgangers of Superman and Lois Lane. Van Zee took over as Nightwing while Superman took Van Zee's place to infiltrate Than Ol's base. Than's henchmen soon discovered Superman's ruse and knocked him out with a wrench to the back of his head.

Meanwhile Jimmy Olsen, disguised as Flamebird, drove the Nightmobile with Van Zee as Nightwing to find the Superman Emergency Squad, a group of elite Kandorian police who dressed in costumes similar to Superman. They approached Than Ol's base and demanded he turn Superman over to the Kandorian Courts.

Just then Van Zee and Jimmy Olsen, dressed as Nightwing and Flamebird dropped out of the sky with their jetpacks, grabbed Superman and took to the skies again. Superman and Jimmy returned to the Fortress of Solitude and entered the Phantom Zone on a 30 minute timer to avoid the detection of the emerging Kandorian's. After they reappeared 30 minutes later, Superman showed Jimmy how dangerous the enlarging ray was by growing a small model of the Eiffel Tower to full size. After three hours it began to disintegrate and collapsed on itself.

In an unknown desert location, Than Ol used the enlarging ray on the entire city. When Superman arrived to warn them of their fates, the Kandorian's shot Kryptonite at him.

After a quick stop to Atlantis and an appearance by Lori Lemaris, Superman drilled into the Earth under the ocean so he could resurface and avoid detection by the Kandorians. They quickly found him and sentenced him to death by Kryptonite.

Just before Superman's execution, the city of Kandor began to crumble, just like the model Eiffel Tower. Superman flew into the sky and shrank Kandor back down to bottle size. In Kandor, the people erected statues of Flamebird and Nightwing and Superman vowed to find a way to properly return the city to normal size some day.

Story - 5: The story was broken up into three parts and followed a standard three act structure. Don't hate me, but I find Silver Age Superman comics about as hit-or-miss as modern comics, but this was a gem. It was the first appearance of Nightwing and Flamebird, although their histories were later changed more than once in the modern age. They became, and still are an important part of the story of Kandor.

Despite some oversimplification, a normal aspect of the age, the arc of the plot flowed smoothly. By the start of the third act for instance, Superman and Jimmy escaped from Kandor and stakes were suddenly way higher. Plus I'll appreciate anything that involves "deadly knockout gas."

Kandor of the Silver Age always worked as a concept because it allowed a visible emotional connection between Superman and the people of his home world without instantly adding thousands of superpowered beings to the ongoing continuity. As the conclusion of this issue illustrates, enlarging Kandor to full size simply doesn't last forever.

Art - 5: I find the hardest part of Kandor stories is keeping the names straight, especially when many of the faces look similar. In this case, Curt Swan did a wonderful job of keeping the look of the many Kandorian characters pointedly different.

The look of the original Nightwing and Flamebird won me over immediately. The Nightwing costume design borrowed a little bit from Batman, but not too much. At least they acknowledged it in the story. Flamebird was brightly colored in red and yellow, but only the mask and the cut of his cape were like Robin's outfit. Plus there's the Nightmobile and utility belts.

Cover Art - 3: Not the best cover design here. The picture described a scene that only sort of happened in the story and barely mattered. It featured several Kandorian's with the exact same face. The interior treated the character designs much better. The characters on the cover all have slightly different clothing, but the faces and hair color of three out of the four of them are completely indistinguishable.

If I didn't already know this was the first appearance of Flamebird and Nightwing, I probably would have skipped over it for a cover that grabbed my attention better.