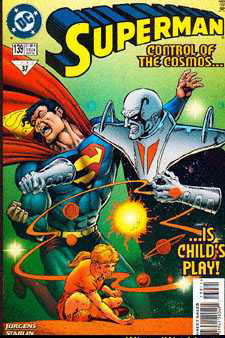 A powerful being who seems to desire godhood. He has the ability to creat alternate realities manipulating the minds of lesser beings. He was seeking Kismet, trying to usurp her place in the Cosmos. He was hoping to use Superman to lead him to her. Superman and Waverider managed to hide Kismet in the past, but Dominus still expected to become a "cosmic force" (SUP #139). Thwarted in his attempts to murder Kismet, Dominus pledged his wrath upon Superman, and set about his demonic plan. Dominus secretly manipulated Superman's view of reality, making him think he had to take control of people's lives to save them from destroying themselves, basically setting himself up as a world-wide dictator. Lois managed to get through to Superman, waking him up to the fact the he was being controlled. Superman fought Dominus in the comic book special issue Superman: King of the World and managed to trap him in an imaginery version of the Phantom Zone.