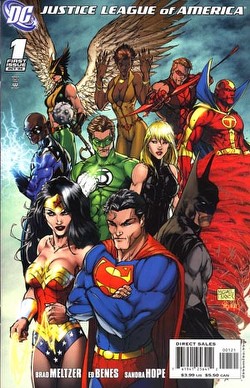 The Justice League of America is the world's leading alliance of super-heroes. Inspired by the original Justice Society of America, the JLA has historically saved America, the Earth, and the known cosmos from innumerable evils. While the membership of the Justice League naturally changes, key members include leading American-based heroes such as Superman, Wonder Woman, Batman, The Flash, Green Lantern, Aquaman, The Martian Manhunter, and The Atom. Other heroes who have been members currently and previously include Zatanna the Magician, Metamorpho the Element Man, Firestorm the Nuclear Man, Blue Beetle, Captain Atom, Green Arrow, Black Canary, and The Elongated Man.

The League is presently headquartered in The Watchtower, an advanced space station situated on the Moon. As one of the founding members, Superman is often considered by the public to be the unmitigated leader of the Justice League. And while the heroes may deny such, indeed Superman, Wonder Woman, and Batman are the most influential members of the League.

As the Justice League has amassed a list of foes, many of these villains have also battled Superman himself numerous times. Kanjar Ro, The Queen Bee, The Royal Flush Gang, The Crime Syndicate of America, and Hyathis have all faced defeat at the hands of Superman.

When Jean Loring, the ex-wife of Ray Palmer, murdered Sue Dibny, (unbeknownst to the League) the JLA was called upon to find the culprit. It was discovered that, using the Atom's old belt, Jean shrunk herself and climbed inside Sue's head, accidentally cutting off the blood supply to her brain. Loring's reason was that she missed her husband and that she thought some "harmless attacks" on multiple heroes loved ones would cause the heroes to stay closer to home. In the end, this crisis set into motion a series of events that would tear apart the current incarnation of the JLA.

It was soon discovered that years before, several Leaguers had voted to mind-wipe Dr. Light after he'd raped Sue Dibny and that, while they were in his mind, via Zatanna's mind control powers, they would "clean" him up a bit. The mind-wipe inadvertently performed a lobotomy of sorts on Dr. Light, making him a complete buffoon and though it wasn't intended, the League members present didn't really see it as a terrible thing. However, during the procedure, Batman arrived on scene, and because the members involved in the mind wipe thought Batman's knowledge of the event would cause the League to collapse, they voted to wipe Batman's mind as well. Once these events were finally revealed to Batman and other "in the dark" members of the League, old friendships and camaraderie between teammates became strained.

Trust was an issue once again, and as Batman felt he could trust no one and because he never wanted to see something like the mind-wipe incident occur again, he felt it necessary to create a monitoring system that would track and "watch" all meta-humans. This system was called Brother-I and was a satellite that eventually led to the creation of the O.M.A.C. virus once Brother-I became self-aware and Batman lost control. Eventually calling itself Brother-Eye, the satellite took to activating the dormant O.M.A.C. virus in millions of people across the globe, turning them into killing machines that would rid the world of meta-humans.

Max Lord, a former member of the JLA and mind-control specialist himself, helped Brother-Eye to become self-aware through his affiliation with Checkmate, and then took control of Superman's mind, forcing him to attack the other heroes. While under Lord's control, Superman attacked Batman and nearly beat him to death and then commenced battle with Wonder Woman. Lord meanwhile, kept telling Wonder Woman that no matter what she did, she'd never be able to free Superman from Max's control, unless she were to kill Superman or Lord himself. In the end, Wonder Woman, feeling there was no other choice, killed Max Lord by breaking his neck, thereby freeing a stunned Superman.

When all was said and done with the O.M.A.C.S. and the Brother Eye satellite had been finally defeated using an EMP to sever the satellite's contact with the O.M.A.C. human hosts, the JLA was left in complete disrepair. Some members had been killed, some had retired and many were simply disheartened by so much secrecy, distrust and death. Due to Batman's secretive creation of Brother-I, Superman's brutal beating of Batman while under mind control and Wonder Woman's killing of Max Lord, the three heroes, oft considered the backbone of the JLA, were left confused and lost. With so many members disgusted or dead, and so many more leaving everyday, the Justice League of America was no more.

During a seemingly "infinite crisis," Superman was forced to battle Superboy Prime and the only way to stop him was to carry him through a red sun. Doing so robbed Superman of his abilities and for a year he was missing from action. At the same time, Bruce Wayne left the States to rediscover himself and so Batman was also gone. To add to the mystery, Wonder Woman was also going through a personality crisis of her own and was therefore out of the hero biz for a year as well. Upon their return though, the three perennial Justice Leaguers came together as friends with a mission. They would restart the collapsed Justice League.

Through a painstakingly thorough process, the trinity decided upon the new members of the League. Though some mainstays had been left out, the heroes felt this new version of the JLA may very well be the strongest yet. The three decided on starting members Red Tornado, Red Arrow, Black Lightning, Vixen, Hawkgirl, the Green Lantern (Hal Jordan), and new Chairperson Black Canary. Wally West's Flash, Geo-Force, Firestorm and Green Lantern John Stewart are some of the more recent additions to the ever-evolving roster and the League's "public" base of operations is called the Hall of Justice and is housed in Washington, D.C. Within the hall however, is a hidden teleportation device that transports the heroes to the new JLA satellite orbiting the Earth.