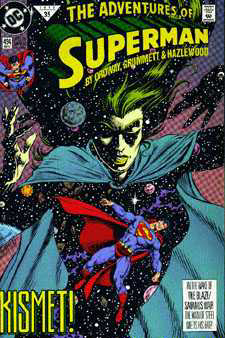 Superman first confronted Kismet following the Satanus/Blaze War (AOS #494). She said she existed between dark and light, illuminating the pathways to both. "Call me Fate - Destiny - Kismet." She does not judge, but she offers people the choice between good and evil. She reviewed many of the choices Superman had made, showing him the possible outcomes of each. (One of them is a quick scenario of pregnant Lois Lane dying when the baby kicked her.) She also appeared to Jonathan Kent when he lay near death following his heart attack (AOS #500).

Kismet reappeared at the end of the Superman Forever comic book warning of cosmic upheavals in time. In the ensuing weeks, Superman co-existed in four different realities. Kismet appeared to him as a little girl in each plane of existance, trying to warn him. Eventually, (SUP #138) she was able to appear in her true form. She told him that they shared a bond, a connection, and she warned him about her arch-enemy, Dominus. Dominus attacked them, and Kismet was wounded but she escaped. Superman and Waverider managed to hide Kismet in the past as Clark's childhood friend Sharon (SUP #139).

Sharon became the superheroine known as Strange Visitor, wearing Superman's old blue energy costume and had quite a few adventures, which sadly ended in her demise at the end of the war with Imperiex. In a last ditched effort to defeat Imperiex, Strange Visitor revealed to Superman that she was Kismet merged with Sharon Vance before heroicly giving over all of her energy to Superman to enable him to defeat Imperiex (SUP #173).