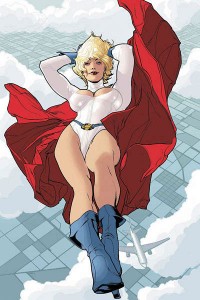 Power Girl was originally an inhabitant of the dimension that housed Earth-2. The daughter of Zor-L and Allura, baby Kara was rocketed to Earth when Krypton tragically exploded. Unlike her cousin Kal-L (who would become Superman), Kara's rocket was programmed to take a less direct route to Earth. Therefore, she was nourished and cultivated in her vessel, which acted as a biomatrix. When Kara finally landed on Earth, she was a blond, busty 19 year-old female; already educated about her origin and her new homeworld Earth. Superman met her craft, and the two cousins quickly bonded.

Superman informed Kara of her vast powers and abilities - none shared by the mortal mankind of Earth. She then adopted the identity of Power Girl, and became one of Earth's newest and most powerful super-heroes. With her cousin's clout and sponsorship, Power Girl became one of the newest members of the legendary Justice Society of America. Along with fellow younger members Robin and the Star-Spangled Kid, the trio was shortly known as The Super Squad. Regardless, Power Girl emerged as one of the JSA's most active members.

As a member of the Justice Society, Power Girl made her presence known, and never shyed away from challenging such veteran heroes as The Flash, Green Lantern, and Hawkman. She also formed a close friendship with The Huntress, who was the daughter of the recently deceased Batman and Catwoman. Power Girl would be one of a shining array of superstars protecting the cosmos. Along with the likes of Black Lightning, Firestorm the Nuclear Man, The New Gods, Mister Miracle, and Zatanna the Magician - Power Girl was one of the new prototypes for so-called "modern super-heroes". On Earth-2, Power Girl remained a prominent hero, and even lent a measure of credibility to Infinity Inc., a group she joined that comprised the sons, daughters, and super-powered apprentices of JSA members.

Power Girl's reality came to a bitter end at the conclusion of Crisis on Infinite Earths. She found herself an outsider, residing in a realm not her own. Now, her very history was in question, and for some time she was led to believe that she originated from Atlantis, as the grandaughter of a fabled sorcerer and lord. Power Girl found some measure of clout as a member of the Justice League. But questions about Power Girl remained: she seemingly shared most - if not all - of Superman's powers...but even The Man of Steel couldn't account for a Kryptonian origin for the heroine. More recently, Power Girl has followed a seemingly destined path. She joined the Justice Society of America, and began wearing a costume that matched her original Earth-2 incarnation.

Things finally culminated when the Earth-2 Superman returned from limbo to rescue his cousin. Informing Power Girl of her original origins, perhaps the "original" Superman has reawakened one of the most powerful heroes, giving Power Girl a rejuvenated, purpose-driven life. Only time will tell if we ever see Power Girl return to prominence as an invaluable member of the extended Superman Family...