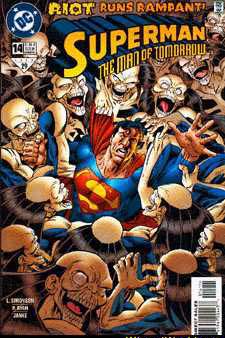 Riot's real name is actually Frederick Von Frankenstein. He is the scion of a long line of scientists of the Von Frankenstein School. Expected to follow in the family footsteps, he worked in a large, highly funded laboratory owned by his father. Being the only heir to his father's legacy, Frederick was under tremendous pressure to succeed at everything he attempted; to remain at the top of his class, to help out in the lab, to initiate new and daring projects, in short, to always be the best. But to accomplish everything he wanted, he would have to be about three or four people. In a move worthy of his mad creator ancestors, Frederick 'borrowed' a temporal phase shifter that his uncle, Dr. Hal Legion, had recently created. Each night he secretly 'borrowed' himself from microseconds in the past and the future, creating however many Fredericks it took to get the job done. He set himself to a number of tasks, among them, inventing the process by which he sticks to walls. He had succeeded far beyond his father's expectations and his own.

Unfortunately, it seems that the multiple phase shifts activated a previously unrecognized metagene. Frederick soon learned to duplicate himself without the help of his uncle's machine. Soon, the disfiguring effects of the phase shifts became apparent, changing his appearance from a normal young man to that of a living skeleton. Since he was no longer of a single mind, he never slept. His behavior became increasingly bizarre until his father finally banished him from the lab altogether. Shortly thereafter he began his life of crime and gave himself the name Riot (MOT #14).

Superman first encountered Riot after a theft of a photon fuel sample from S.T.A.R. Labs. Superman initially decided to pull his punches until he learned what manner of creature Riot actually was. Unfortunately, any forceful contact Superman had with Riot instantly duplicated him. Where there was one, there are now two and so on. Superman eventually corralled all of the Riots in a construction dumpster only to find that Riot had somehow escaped (MOS #61). Riot usually stations a Riot out of the battle for this reason alone. At will, Riot can incorporate the ones that get into trouble into himself. Superman later found out that the fuel canister Riot had stolen from STAR Labs contained not the photon fuel sample, but bone fragments from the monster Doomsday! Riot was drafted by Morgan Edge to be part of the first Superman Revenge Squad that Superman eventually overcame. During this encounter, Superman learned that the force of his impact is equally distributed to each Riot. While colliding with two Riots with the force he thought was enough to knock them both out, he only created dozens more. If used quickly, the SCU has a device, a Neural Disruptor Net, that is able to hold Riot in check and force him to reabsorb the other Riots (ACT #730).

Riot appeared in Metropolis recently to create chaos by freeing hundreds of monsters from the containment cells at STAR Labs (AOS #569). In another appearance (MOT #14), Riot broke into LexCorp to steal a device known as a Time/Phase Integrator. While other Riots kept Superman busy, the Riot with the integrator escaped to his secret hide out. Superman, understanding what was happening after Lois Lane related Dr. Legion's story to him, hung back and did nothing as more and more of the Riots were incorporated. Superman had to stand in the way of the new Meta S.C.U., (Bad Mouth, Fireworks, Freight Train, and Roo) to allow Riot to incorporate all of himself uninterrupted. In the end, the Phase Shift Integrator helped Riot from vibrating out of phase and become one, and finally fall asleep. Currently Riot is held at Stryker's Island Prison.