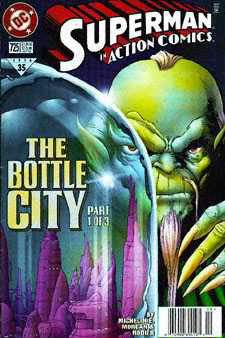 While Superman ( in SUP #107) was escaping from The Tribunal in "The Trial of Superman" series. He was on a planet called Haven, on a ship called She-Devil, when he learned of Tolos, and that's when Superman first found Kandor. Tolos is a wizard/magician of some kind, whom the people of Haven were very frightened of. Superman took Mope (a creature he be-friended at this time) there so he could be healed. As payment Tolos tried to enter Superman's body. Tolos is really an 'ectoplasmic' form of life.... constantly looking for hosts. Tolos had searched the whole galaxy looking for specimens to shrink and include in his bottled city so he could use them as host bodies.

He came to earth looking for Superman in ACT #725 where he fought Superman in the guise of different people who he 'entered' from his bottle. In MOS #60 he tried to defeat him by taking the body of a Daxamite called Cil-Gand. With a case of lead poisoning, Tolos had to return the body to Kandor for a while after battling with Superman. When Cil/Tolos returned, Superman sprayed him with lead gas (with help from Prof. Hamilton), Tolos tried to enter Superman knowing defeat was close, but a free (yet dying) Cil Gand destroyed Tolos with a pair of "mind goggles" (in SUP #116).

Although, presumed dead, Tolos returned in MOS #69 when Superman and the Atom ventured into Kandor to try and solve civil unrest, Tolos had been hiding inside a Kandorian female called Faern, and possessed Superman upon touching him. Although (thanks to some help from Prof. Hamilton) Superman was able to trap Tolos within Kandor's phase barrier.