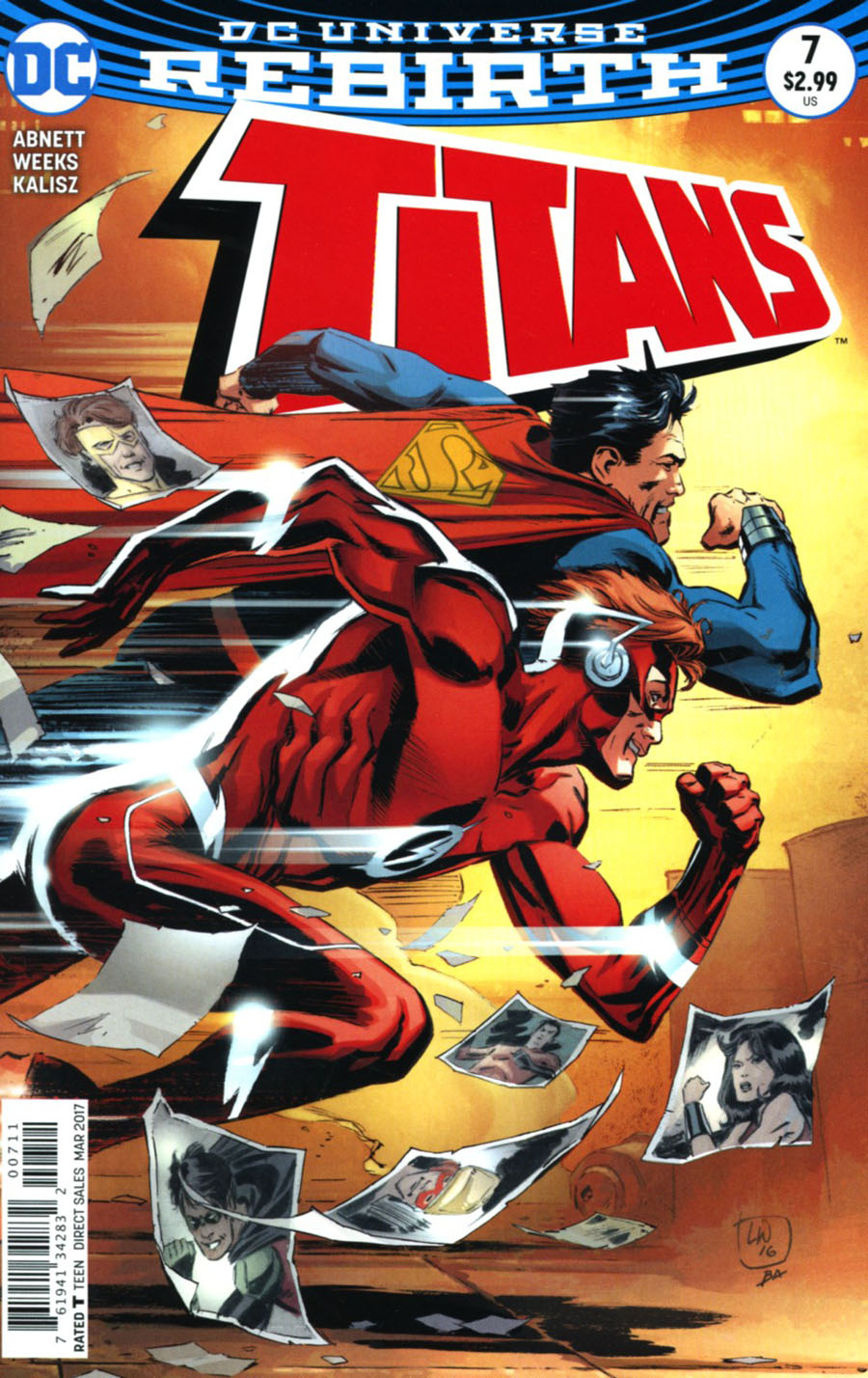 Reviewed by: Keith Samra
Click to enlarge
The Titans (Wonder Girl, Flash and Arsenal) fight a threat in their new home city of New York. Through some good team work, they are able to bring the giant foe down. Flash and Arsenal argue over collateral damage, as Wonder Girl breaks it up. Just then they realize they have a visitor, as Superman floats above. He tells the Titans he heard about the trouble, and thought he'd come lend a helping hand, but since the Titans have taken care of it, he acknowledges the Titans, tells Flash "It's good to see you again Wally" and flies off.

Flash startled, is taken aback by the fact that Superman remembers him, and chases him down to talk. Superman thinks Flash wants to race him, speeds up, and the two heroes head across country.

Meanwhile, the rest of the Titans at the new Titans Tower go over all the legalities of their new home with their appointed lawyer from the city.

Meanwhile in Iowa, Flash manages to get in front of Superman and asks him to stop, so they can talk. Flash asks how is it that Superman can remember him, when the world forgot about him as he fell in the time stream. Superman tells him that he remembers a different world, before the one now. Flash states that time had been "edited". Both heroes acknowledge a tampering with reality. Superman asks Flash if he has lost his wife Linda Park to the "tampering," Flash replies that she is still around, but remembers nothing of the life they had. Superman tells Flash that the potential for love is still there, and that if she is worth it, he could start a new life with her. He encourages him by telling him, that he can outrun Superman, so anything else shouldn't be too difficult. He tells Flash that he is more than welcome anytime to just come and talk with him, he then shares his own secret, that he and Lois are still married and have a son together. He tells Flash that he doesn't trust very many people with that knowledge, and that he has the utmost faith in him. He ends with asking Flash if he's up for a rematch, as he had been taking it easy on him so far.

In a diner, Arsenal and Wonder Girl discuss the possible feelings that they may have for one another, and then head back to the Tower.

Finally at the end of the day, the Titans are gathered at the top of Titans Tower as Flash arrives and tells the team that he "went for a run with a friend". As Superman floats down to the awestruck team and tells them that "This reminds me of the old days".

Story - 5: What a great issue. I have always enjoyed Abnett's writing, but I feel he really outdid himself here. This really felt to me like an old Marv Wolfman and George Perez issue. So much heart and he was able to capture the voice of each character so well.

You may notice that I wrote a rather detailed synopsis, I did so, so that I may be able to do the issue justice. The main plot thread of this issue was obviously the conversation between Wally and Clark. They are both "refugee's" of the pre Flashpoint DCU. So there is a definite kinship over this, but let's not forget, Wally fought alongside Clark in the JL for a number of years, as well as being the only Flash of the DCU while Barry had perished in the Crisis. Years ago, I had read an interview that Grant Morrison had given to Wizard Magazine, as to how Wally sees the rest of his teammates in the JL. In it, Morrison claimed that Wally looks at Superman as a "favorite uncle". That relationship is clearly evident here. Abnett manages to write Clark as the role model that he should always be portrayed as, someone that all the time in the world for his friends and family.

I cannot say enough good things about this issue, so I won't lay it on too thick. It's a great issue, and treats Superman with the proper respect that he is deserves. I loved the encouragement he gives Wally, by saying, "If you can beat me in a race, nothings too hard". It's made me want to see Wally pop up in the regular Superman books from time to time, just to chat!

Titans as a book has been a good read since its relaunch. The family dynamic is refreshing and nostalgic at the same time. I love that Tempest is frustrated with all the legalities of the team residing in New York, the possible budding romance between Roy and Donna and Dick and Lilith being the voices of reason. And that's just this issue.

My favorite aspect of this book has to be that the Titans as a team are investigating "the missing 10 years," and trying to find out what happened to the timeline. So it's only appropriate that Superman turned up, seeing as how he and Wally are from the "old world". I see that over in the Batman and Flash titles, they are establishing the fact that Batman and Flash (Barry) are also looking into these matters. If that is the case, then Wally and Clark really need to be involved also.

I absolutely loved this issue, and I really implore you, if you have been following Superman since Rebirth, pick up this book if you already haven't.

Art - 5: Lee Weeks has developed into one of my favorite artists as of late. He has a nice moody style with some 80s and 90s sensibilities. His figure work is grounded in reality, with the exception of some moments, but even then, it isn't cartoonishly exaggerated. What I like most is the body language and facial expressions. As I said, he works to keep his characters looking real, and in it, he is able portray real emotion to them. I love the fact that at times, his Superman looks a little like Dan Jurgens. This may be because he drew Dan's Lois and Clark series. But there definitely is a Jurgens feel to him.

Weeks also makes the costumes for every character work too. Though he did not color the book, his art makes the blue boots on Superman's suit look pretty good, as he uses a lot of shading to disguise the fact that they are the same color in certain scenes.

The scene that introduces Superman to the story, as he floats arriving a little late as the Titans take care of the Giant adversary in the beginning evokes the scene From Man of Steel (film) but more so of Kingdom Come when Superman returns at the end of book one. I also loved the wide shot of the Titans looking up from Titans Tower as Superman floats down toward them. How you can show a sense of awe in multiple characters in a wide shot like that is truly a mastery of the art form.

I also really like the way he manages his panels per page, a really good flow that doesn't trip up the narrative in any way.

I mentioned that Weeks has a moody style, this can probably be attested to his use of heavy inks in certain parts of the page. I feel it gives the world he renders a little more gravitas.

Lastly the coloring, Carlos M. Mangual's palette is a little muted, but I think it gives the book a nice personal feel. The scenes between Clark and Wally in the fields of Iowa are very warm and soft, whereas Manhattan has a slightly colder and grittier feel. It's expertly done.

Cover Art - 5: The main cover of Wally and Clark racing is amazing. They both have smiles as they race. It gives you the feeling that these two have done this before. Also, look close, Superman is in the lead. I especially like that Wally doesn't have all the unnecessary lightning all over his body like Barry seems to always sport these days. The variant by Nick Bradshaw sadly doesn't hold up as well.