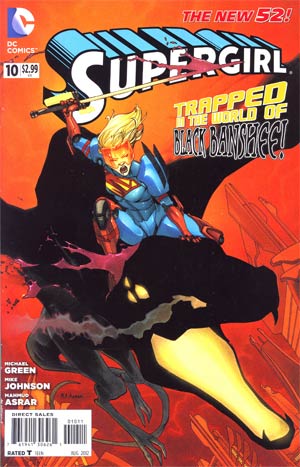 Click to enlarge
Kara Zor-El finds herself on Krypton. Her mother had taken her to Lar-Zo for the Matching Process. Kara had fallen asleep during the procedure. This disappointed her mom, but Kara feels disoriented. She realizes that she is reliving a memory. Yet, something feels wrong - like it's all a dream, or worse, a nightmare. Kara soon is traveling with her mother to the Firefalls as they did in the past. However, she recalls things differently. There was no argument about Kryptonian tradition the last time. Kara then remembers her confrontation with the Black Banshee in the previous issue when she is face to face with the villain. The Black Banshee is in the form of a winged Flame Dragon, a creature about which her father used to tell frightening stories to her. Kara's Supergirl costume is then changed in the armor of the warriors who battled the great beast. While the Black Banshee has absorbed most of the Maid of Might's powers, she may yet defeat her foe and possibly save her friend Siobhan Smythe from his evil curse.

Supergirl has been hurled into Krypton's Crystalline Forest by the Black Banshee. Tom Smythe helps her out of the alien waters. He explains that his father absorbs the souls of others and forces them to relive nightmarish versions of their memories. Kara proceeds to tell Tom of the fight between Siobhan and the Black Banshee and her transformation into the Silver Banshee. Unaware of how much time has passed, Tom believes his sister is still a baby girl. Thus, he is more determined to help Kara defeat the Black Banshee. In an effort to help, Supergirl uses what energy she has to create a sword that is hopefully powerful enough to stop Tom and Siobhan's father. Kara and Tom are going to have to work fast to create a strategy against their foe, for the Flame Dragon form of the Black Banshee is facing them. Only time will tell if the pair of heroes can best their dark mystical enemy.

With sword in hand, Supergirl has jumped onto the dragon Black Banshee's neck. She refuses to give up in spite of the rigorous conflict. Her blade makes contact with the Black Banshee's neck decapitating him. This allows Kara and Tom to be free from his magical plane of existence. The Black Banshee is now weakened. The Silver Banshee then lets out a sonic scream that consumes her father's power. The battle is won, and Siobhan and Tom Smythe are together again. However, the family reunion is cut short when military forces hunting Supergirl arrive. Kara and the Smythe siblings escape as an armored being with shape shifting abilities awaits in the shadows to commence with Mission Codename: Supergirl.

Story - 5: I admit that I had my doubts about the New 52 in general. They haven't been completely quelled. Yet, some titles, including Supergirl, are giving me hope for the line. This book was off to a slow start until the Silver Banshee story began. It's been an enjoyable arc, and this is the best issue in the series so far. I particularly liked the fact that the Silver Banshee is different from previous versions. I actually have sympathy for her and care for what happens to the character. I can't wait for future appearances of Siobhan.

This tenth issue, like previous chapters in this arc, is pretty fast paced. There's no filler or fight scenes that drag out too long. It's just a solid, one hundred percent pure, grade A, fun story. Whatever you do, don't blink. Otherwise, you'll miss what's going on in this fantastic comic book.

Art - 5: This issue really showcased Mahmud Asrar's strengths as an artist. The visuals are a perfect blend of fantasy, horror and superhero action. Let's hope he stays with this title for a long time.

Cover Art - 5: This reminds me of the covers from the 1970s and 1980s. It gives the viewer a taste of what's going on inside and makes them want to buy the comic. Asrar has given us an astounding image.