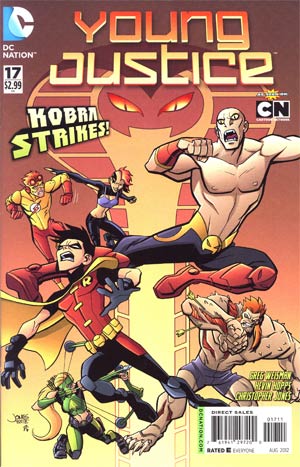 Click to enlarge
Picking up immediately after last issue the team and their adult mentors interrupt the Kobra cult ceremony. Lord Naga-Naga aka Kobra has set up some kind of supernatural event to merge with his twin brother, Dr. Jason Burr with a magical snake dagger.

To ensure the heroes don't intervene Kobra uses the dagger to make a King Cobra hundreds of times larger. Green Arrow, Batman and The Flash give chase as it heads into the heart of the city. In the meantime the teens try their best to halt the ceremony. They watch in horror as Kobra becomes a snake god and have to fight off his minions Shimmer and Mammoth.

Through teamwork Artemis, Robin and Kid Flash are more than a match for the reptilian duo but celebrating a win is short as Kobra attacks. The adults are unable to best the giant snake until Green Arrow blinds it with some firework arrows. Distracted by the lights the snake ends up swallowing a grenade hurled at him by Batman and promptly explodes over a theatre, much to the awe of theatergoers.

Kobra takes on the trio of teens and amid Robin's quips and Artemis' acrobatics, Kid Flash realizes that the snake dagger is the key to the ceremony and strategizes a plan to defeat their foe. While Kobra fights off the boys Artemis fires an arrow strapped with the snake dagger directly at the god's chest.

The force of the blow and backlash of magic knocks them all out and when they come to Dr. Burr is back to normal. The team round up the cultists, Mammoth and Shimmer to face the authorities for their crimes. Unfortunately Kobra was able to escape. The teens happy to have proven themselves on a cooperative mission are elated when their mentors arrive and praise them for a job well done.

Story - 4: I'm not a fan of Naga-Naga, Shimmer or Mammoth but this issue and the last were great fun. Especially to see the two factions of the League working together and the adults realizing their sidekicks were far more capable than perhaps they had been given credit for. The dagger finale and the closing explanations were a tad cheesy in an otherwise action packed issue. I am glad the adults didn't hog the story.

Art - 3: The inks were a bit heavy in places perhaps to accentuate the night time events in the story. Unfortunately the coloring was a bit wash-like so the inks came off a little harsher than need be. Printing everything in low light would make for atmosphere but a bit harder to read so I respect what they've tried to do to create a happy medium.

Cover Art - 3: Suffering from the same effects of the art inside, what should be a darker more sinister feel to the art comes off too light. Even the danger seems less threatening, like a sparring match rather than a fight to the death.