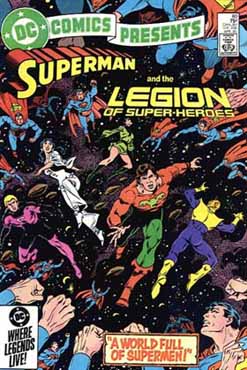 Superman and the Legion of Super-Heroes in: "A World Full of Supermen!"

Somewhere in space, five Legionnaires (Element Lad, Phantom Girl, Ultra Boy, Shrinking Violet, and Chameleon Boy) appear through a stargate. They were expecting to arrive on 30th Century Earth, but have apparently overshot their destination. Looking around, they see a large asteroid with it's top flattened off like a mesa. On the asteroid's mesa is a full-scale replica of the city of Metropolis.

Meanwhile, a shadowy figure is monitoring the Legionnaires on a computer screen. The figure decides to investigate them further, and initiates a tractor beam, which pulls the Legionnaires towards the city.

The Legionnaires aren't very thrilled by this, and Ultra Boy breaks free of the tractor beam and flies ahead of the other Legionnaires to break up the machinery controlling the beam. He's about to smash it when a blurry blue and red figure pushes him away from it at super-speed. Ultra Boy punches his assailant in return, but hurts his hand in the process. The figure slows down, and Ultra Boy realizes that he is fighting Superman. Superman punches him, knocking him out.

Meanwhile, the four other Legionnaires are still in the grip of the tractor beam and being pulled down to the city, when they realize that it is getting very hot all of a sudden. That's when they see Superman flying up to attack them, using his heat vision on them to make things very uncomfortable. Element Lad quickly creates a lead cocoon, which forms around the four Legionnaires, to shield them at least temporarily from Superman's heat vision.

The Legionnaires realize they can't stay where they are, so Element Lad opens a small hole in the cocoon. Shrinking Violet shrinks down to fit through it, and Chameleon Boy flies through it as a fly, while Phantom Girl simply phases through it. When they get outside, they're startled to see that they're not just fighting one Superman, but four.

Meanwhile, the figure monitoring the battle is revealed. It is Brainiac, one of Superman's arch-enemies. He has at this point identified the five heroes as members of the Legion, and formulates a plot in his computer brain through which he can use them to destroy Superman.

On Earth, in Metropolis, Clark Kent is just wrapping up the nightly news broadcast. He's about to leave the production studio, when he feels a pain in his head. Someone is sending out an ultra-sonic frequency beam that only he as Superman can hear. Clark changes into Superman, and flies off into space to track down the source of the beam.

Getting back to the Legion, Chameleon Boy turns himself into a globular creature and envelops three of the Supermen. Unfortunately he doesn't have the strength to hold them for very long, but just as they get free, Ultra Boy, recovered from being knocked out, returns. He punches one of the Supermen so hard that it breaks, and it is revealed that the Legion is fighting robots. Realizing they aren't really fighting Supermen, the Legion makes short work of the Superman robots, who apparently don't have all of the real Superman's strength and invulnerability. They then free Element Lad from the lead cocoon, where he protected himself from Superman's heat vision by turning the air around him into freon gas.

The Legionnaires then float down to the street of this replica city, where Phantom Girl speculates that maybe this is some kind of Anti-Superman testing ground. The words are barely out of her mouth when an entire squadron of Superman robots shows up to attack the Legion. However the Legionnaires are prepared. Element Lad turns some of them into helium gas, while Chameleon Boy turns into a large brick like alien and smashes them. Ultra Boy likewise smashes them, while Phantom Girl goes intangible, reaches inside them and breaks their wiring.

Meanwhile, the ultra-sonic frequency has led the real Superman to the asteroid. He is unsure of whether someone needs help or if he's being lured into a trap. Brainiac observes his arrival via computer screen, and comments that everything is in place for Superman to die this day. Superman flies over the replica of Metropolis, and scans it with his X-Ray vision. He quickly finds the five Legionnaires have taken refuge in the replica Daily Planet building. He also sees another squadron of Superman robots heading towards the Planet building, and joins them, not realizing until it's to late that they are going to attack the Legionnaires.

Once they've knocked out Superman, Brainiac teleports in with an electronic floating chair next to him. Brainiac is protected by a force field so the Legionnaires can't get at him. He reveals that he has been using a mild form of mind control on the Legion, subtly conditioning them so that they would attack anything or anyone that looks like Superman. Brainiac then picks up Superman, and places him in the chair, which he reveals to be a molecular disassembler, which will strip Superman's molecules of their binding elements and disperse him throughout space. He turns on the chair and sparks begin to appear around Superman. Considering himself safe within his force field, Brainiac feels safe enough to switch off the program that was mind controlling the Legionnaires.

Freed of Brainiac's influence, Ultra Boy tries to punch his way through the force field to no avail. At that point Element Lad walks up to the force field and tries to talk to Brainiac. At first Brainaic doesn't want to be bothered, but Element Lad points out that the chair seems to be malfunctioning, the same sparks that are disassembling Superman seem to be flashing around Brainiac as well. Not wanting to be disassembled himself, Brainiac turns off the chair, and that is Superman wakes up and threatens Brainiac. Realizing that his odds of winning now are slim, Brainiac blows up the chair and makes his escape amid all the smoke the explosion caused. Element Lad reveals that the chair didn't really malfunction, he just used his powers to make it look like that was the case.

Story - 4: This was a well-written Superman team-up. It had plenty of suspense, Brainiac certainly had a good plan to destroy Superman, a plan which almost worked but for some clever thinking on Element Lad's part. The battles between the Legion and the squadrons of Superman robots were well paced and well thought-out. The only minor quibbles I have that keep this issue from getting 5 shields, is that it's not completely explained how a stargate brought the Legion to the 20th Century to begin with. Also, I didn't like seeing Superman get beaten by Ultra Boy so easily. Those minor issues aside, I found this to be a thoroughly enjoyable comic, and if you can find a copy for under $2.00 (which shouldn't be to hard), it would be worth your while to acquire it.

Art - 4: The artists do an excellent job here. The battles between the Legion and the Superman robots were well-depicted, highly detailed, and flow from panel to panel. Brainiac is threatening, and of course with Curt Swan handling the pencils, Superman simply looks like Superman.

Cover Art - 2: I wasn't terribly impressed with Eduardo Barreto's cover. It really doesn't appear to me like it has a center to it that grips your attention. Others might disagree with me, but this is far from my favorite cover. Just don't let it dissuade you from the excellent story contained within.