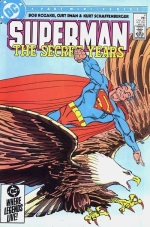 That is the question on the minds of people all over Earth and headlines in the Daily Planet. Planet editor George Taylor assigns reporter Perry White to investigate. Should White get the story of the Boy of Steel's whereabouts, the Pulitzer prize winning journalist will become Taylor's successor when the chief goes into retirement soon. Meanwhile, Lex Luthor has been secretly launching satellites into space. Governments on both sides of the Iron Curtain are nervous as they believe the opposition is preparing something big. At the same time, Superboy has taken refuge in the mountains of the island he found on the other side of a rift he had discovered in the Bermuda Triangle. He is attempting to come to terms with the deaths of those he's cared for. The Last Son of Krypton is extremely immersed in his grief and anger. This could cause more of his loved ones to be in grave danger if he does nothing to save them.

Metropolis Police Inspector Bill Henderson and Perry are looking for Superboy. Their only clue is the supersonic whistle the late Billy Cramer left behind. Perry takes it hoping it will lead him to the young hero somehow. He knows that Superboy is needed now more than ever, for Luthor has interrupted radio and television broadcasts. He has revealed that he's launched a total of thirty-six satellites into space. Should the Metropolis Kid fail to accept Luthor's challenge to a duel by 6:00 PM tonight, the maniacal genius will use his orbiting devices to destroy all life on Earth. Can Superboy be found in time to stop his evil nemesis, or will Lex Luthor finally triumph over his foe?

In his mountain refuge, Superboy's dreams disturb him. Jonathan and Martha Kent discuss the outside world's search for Superboy. Martha said that humans don't deserve her son. Suddenly, Jor-El and Lara burst through the living room walls saying that it is the Kents that didn't merit the young man. Violent conflict ensues. Kryptonite knitting needles hit Lara, but they have no effect. A piece of one is now embedded in Superboy's leg. However, his parents are too busy fighting to help him. The sound of the supersonic whistle intervenes. Billy Cramer is blowing it. The Kryptonite disappears as fathers and mothers cease pummeling each other. He orders them to stop making Superboy feel guilty over their deaths. Billy also perished because the Boy of Steel didn't get to the city in time to rescue him. However, thousands of other lives needed to be saved. Superboy became Superman when he decided to go for the greater good in order to become Earth's greatest hero.

Superman awakens to hear the supersonic whistle. Flying through the rift, the Man of Tomorrow finds reporter Perry White using it. White tells Superman of Luthor's challenge. He has two minutes to comply with Luthor. This gives the Last Son of Krypton plenty of time to deal with the three dozen satellites. Unfortunately, Lex has planned for this. Should one of his orbiting death dealers be disturbed, all of them will be activated. This gives Superman no choice but to duel Luthor directly. Upon finding Lex's hideout, our hero learns that his arch enemy created the space devices to give him abilities similar to those of the Metropolis Marvel. The only powers Luthor does not have now are super vision and hearing. However, the evil genius believes the fight between him and Superman will be a fair one. Both Lex and the Man of Steel are now physical equals. Who will come out on top in this battle of titans?

Lex's newly created superhuman strength has caused the televised battle between him and Superman to be a draw. Luthor is borrowing under a vein of Galenite to gain an advantage when he becomes buried under rock. Knowing he cannot allow anyone to die, even his greatest enemy, Superman saves him. This could prove to be the Man of Steel's undoing, for Luthor now has him in a choke hold. Superman falls to the ground and ceases breathing. As a result of his victory, Luthor destroys all his satellites. Suddenly, much to the surprise of the criminal mastermind, Superman is alive and well. He had stopped his breathing and heartbeat to simulate death. Now, Lex Luthor will go back to prison, but he vows that he and Superman shall have another confrontation sometime in the near future.

Perry White has gotten the story of Superman defeating Lex Luthor. He is now the new editor in-chief of the Daily Planet. Superman congratulates him and thanks him for calling him back into action before resuming his final school year at Metropolis University as Clark Kent. Kent saves Ducky Ginsberg from rolling down a hill dangerously in his wheelchair. However, unlike with Lori Lemaris, Clark merely grabs it. The two young men chat and eventually graduate together with Tommy Lee and Dave Hammond. The quartet celebrate by having dinner with Tommy's parents. This and some memories of Jonathan and Martha Kent before his Smallville High School Commencement Ceremony help Clark to learn to live in the present and move on with his life. One chapter has closed and another begins as young Mister Kent is hired by Perry White to be a reporter for the Daily Planet. With that, new adventures are just beyond the horizon for Superman.

Story - 4: There are some plot holes I wish to discuss. First, how would Superboy actually know the outside world was looking for him? Sure, he could make assumptions, but there is no actual mentioning of how he discovered the newspaper headlines shown in his dream. Secondly, the Kryptonite should have hurt Lara. It didn't make sense that the knitting needles broke on her skin. Aside from these major flaws, this final issue of Superman: The Secret Years is the best in the entire series. It's a pity the rest weren't as good.

Looking back on Superman: The Secret Years as a whole, perhaps it would have been better suited as an annual. Much of the final product in the first two chapters feels like filler material. There were elements I liked, but they were overshadowed by what felt like Bob Rozakis' attempts to prolong the story. I did like seeing Pete, Lori, and the overall conflict with Lex and Clark/Superboy/Superman and the Boy/Man of Steel 's inner turmoil. Plus, the character evolution of Billy was well done even if I didn't really care for him in the first issue. Overall, Superman: The Secret Years, while having a rocky start, is a fun ride that any fan of the Pre-Crisis era would love.

Art - 4: Throughout this series, the images have merely told the story. This issue is also like that. Yet, it was drawn by Curt Swan, and I love his style. He's still the best artist for the Man of Steel in my opinion.

Cover Art - 1: Something about Frank Miller's covers for this series, including this one, just doesn't sit well with me. The man has done great things for comic books. Unfortunately, this image is not one of those things.