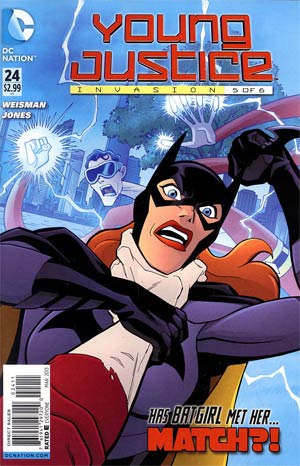 Click to enlarge
Deadshot's rocket launches towards Harjavti during his big speech. Superman rushes to intercept it only for the rocket to dodge him and loop back towards the shooter. Clark gives chase and M'Gann tries to stop Deadshot before he can use the decoy as a distraction to kill the Senator.

Back in the present Gar and Bee race down the hole in Metropolis in hopes of deactivating the shield generator and across the city at the same time, Plastic Man watches helplessly from outside the shield as Batgirl is fighting off Match. Black Lighting is trying his best to calm the city and up in the atmosphere, Martian Manhunter, Flash and Atom crash onto the force shield's surface.

With all the chaos on Earth it isn't improving in space either, as M'Gann and La'Gaan are trying to sneak aboard Kylstar's ship. With no way in after scanning the craft, M'Gann phases and tries to sneak aboard while telepathically reaching out to Superboy. The imprisoned heroes are taking a severe beating fighting Kylstar as individuals so when Wonder Woman catches her breath she orders them to follow a new strategy - to combine efforts and fight as an army, as a League.

A telepathic message from Nightwing wakes J'onn, Flash and Atom, while Dick's team of heroes, made up of Blue Beetle, Zatanna and Wonder Girl are successfully cloaked and aboard Brainiac's ship. As they sneak around they discover a chamber that they initially believe is a room of dioramas. Dick looks closer and discovers they are bottled cities and that Metropolis is next! On the Metropolis border Plastic Man watches as a beam emanates from Brainiac's craft and slowly begins the shrinking process.

Batgirl has been dodging and reflecting blows with Match for an hour but as she grows tired she uses the last few capsules from her utility belt to formulate a plan. Using a smoke bomb she blinds Match. Under cover Barbara fills her cowl with rapid drying liquid cement then wraps it around her foe's head before he hurls her into the force shield. The plan works and Match gasps for breath pulling the cement off too late before losing consciousness.

On Kylstar's ship, the plan to fight together works as Wonder Woman's lasso, Superboy's strength and Captain Marvel's speed are able to bind Kylstar. Captain Atom and Superman smile as they deliver a powerful dual punch. The translation orbs arrive and victory is short as they create a sound field that defeats all the heroes by negating all their abilities.

The emergency services arrive to help Black Lightning calm the citizens, unaware that they are all shrinking. Aboard Brainiac's ship the team are searching for a way to reverse or deactivate the shrinking beam. They might have been able to if Zatanna's magic didn't begin to fade. It seems Brainiac's ship is equipped to drain mystic energy but before the sorceress is able to recast a new cloaking spell Brainiac himself appears and electrocutes them all.

Story - 4: This epic just keeps raising the bar. My only downer is that there is no recap or even an attempt at one. When this is no doubt collected for trade there will be no need for it but as this story is a six month arc it's difficult to just get through especially with the breakneck speed of story transitions. I found myself lost without referring back to the past chapters. I will say that I am looking forward to the finale!

Art - 5: The scene where they take Kylstar down was confusing, but only in the seeming rush to keep pace with the story's energy. Aside from that it's hard to critique the art as its near animated crispness truly excels.

Cover Art - 4: A different focus for the cover theme this issue and a different angle breathes in a bit of freshness. I love Plas and Barbara. Batgirl hasn't had as much focus as the others do. It's nice that her fight with Match takes center stage here.