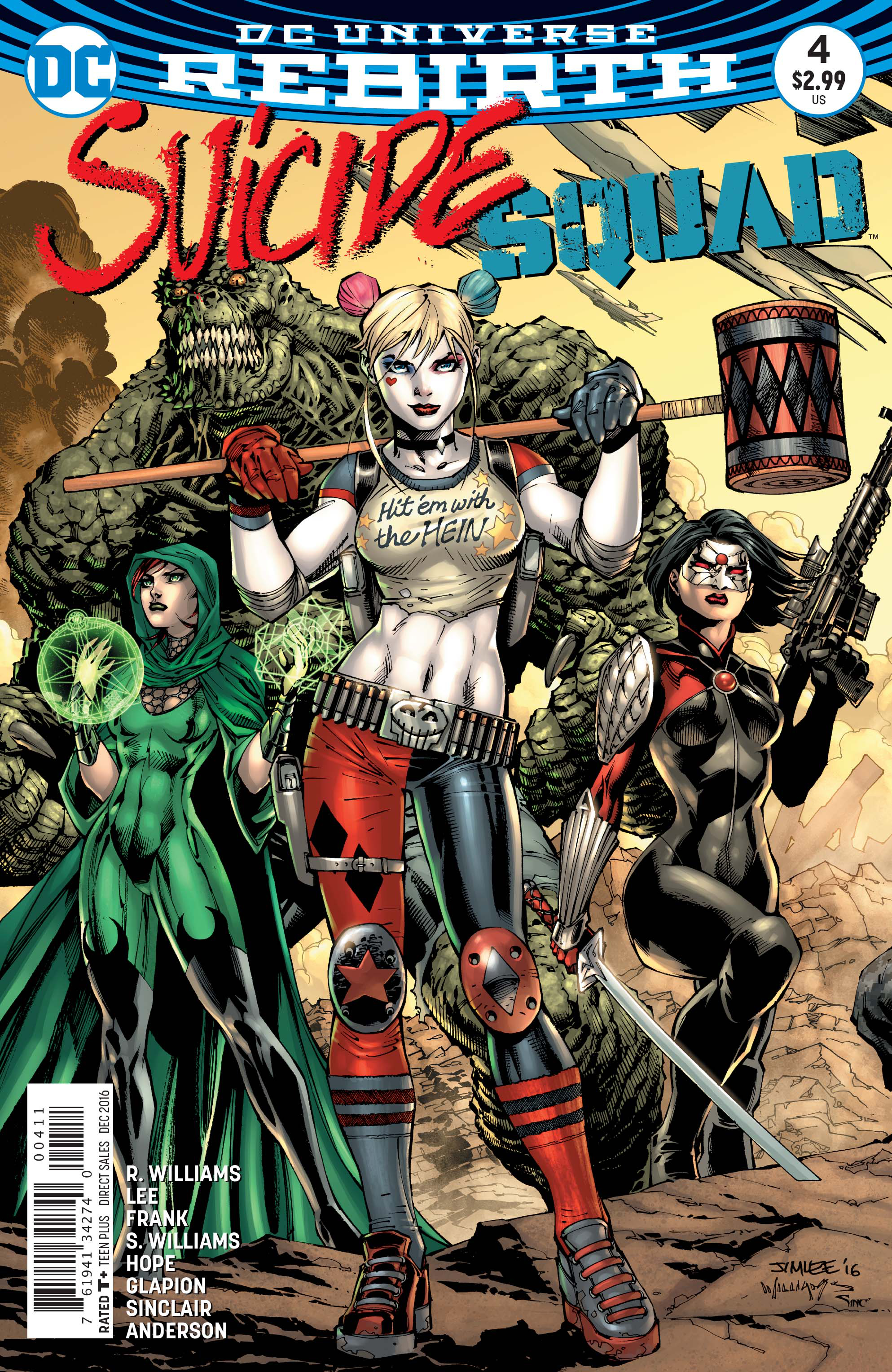 Reviewed by: Keith Samra
Click to enlarge
The Suicide Squad engage in battle with General Zod. They rally to find a way to defeat or escape him. They manage to send him back to the Phantom Zone, and then have to deal with the super powered guards in the facility. With the help of Hack, they manage to teleport back to their headquarters. And Amanda Waller then realizes that she now has the Phantom Zone in her possession.

Story - 4: I combined both issues #3-4 in this review, for no other reason than there is only enough story for one issue, shared between the two. This is no criticism to Rob Williams story, just that these books are very decompressed... Or "paced" in such a way. I'm guessing to help Jim Lee to complete a run for more than 2 issues, to help the book sell better.

There are some great character moments here, and good dialogue, but essentially it's all a big throw down from the end of issue #2 between Zod and the squad. As I will mention in the art section of my review, there seems to be no point in having a "hulked out" General Zod. Just a bizarre choice.

I have two main issues with these two issues... No pun intended... Honest!

Firstly, we see the death of Captain Boomerang at the end of issue #2, and we are constantly reminded of his incineration at the hands, or rather the eyes of Zod through out both these two issues. It really feels as if it was just done for "shock value," to remind us, that this is THE SUICIDE SQUAD, meaning they COULD DIE... But we lose a good character like Captain Boomerang, just to give us the "Oh my Gosh, they killed Digger" moment. (Yes, that was a South Park reference). I feel a good villain, especially a prominent Flash villain is lost, with no real ramification. Captain Boomerang has been a staple of this series since the first incarnation of this team in the 80's. So to just kill him off like that, seemed like a waste. Especially since General Zod will not be sticking around at all.

Which leads me into my second gripe, which is, whats the point of wasting Zod like that? You bring in one of the most dangerous Superman villains ever, and treat him in a manner that the Marvel comics often did when any of their characters tussled with the Hulk. Though let me just say, that Amanda Waller having access to THE or A Phantom Zone projector is quite intriguing. I hope that this will come into play in the future.

Just to finish up on Zod, I didn't like that Katana was able to cut Zod. You could make the excuse that her sword is magical, or that Zod didn't have enough solar energy in his cells to make him invulnerable. I just don't like when other characters can easily hurt a Kryptonian. I'm sure many will agree, it really sucks the big one when Superman is able to be taken down by so many characters in the DCU.

All in all, not a bad couple of issues, but the last 4 issues can easily be adapted in to a 20min animated episode. Much like the Task Force X episode of the Justice League (Unlimited) animated series in season 3.

Art - 5: I make no excuses, I am a really big Jim Lee fan. Have been since the 90s. So I feel he still has done a great job with both these issues. My biggest and main gripe is the size he has given General Zod. He looks 9ft tall, and pretty much looks like a "hulk". I don't understand this particular art choice on Lee's part, but his art is fairly consistent throughout both issues. And as I mention last review, Lee still has a very 90s strong art style in his costume and character designs. But that looks pretty good on a nostalgic level.

Long time Jim Lee collaborator Scott Williams works his magic on the inks as usual, however on issue #4 he is joined by Sandra Hope, Trevor Scott and Jonathon Glapion, and in a few pages it shows! The art shifts ever so slightly, but enough to make it annoying.

Alex Sinclair is great as usual with his color palette, with help from Hi-Fi. Can't not give the master colorist a shout out.

Cover Art - 5: I like the standard covers by Jim Lee. They are very Jim Lee-esque, but what else would you expect from the man. My favorite would have to be #4. I like the pose Harley is in, front and center. Aside from Killer Croc, it's an all female cover, and I like that they have 3 strong female characters on the squad.

The Lee Bermejo variants are really cool also. He'd be the perfect regular cover artist for this book I feel.