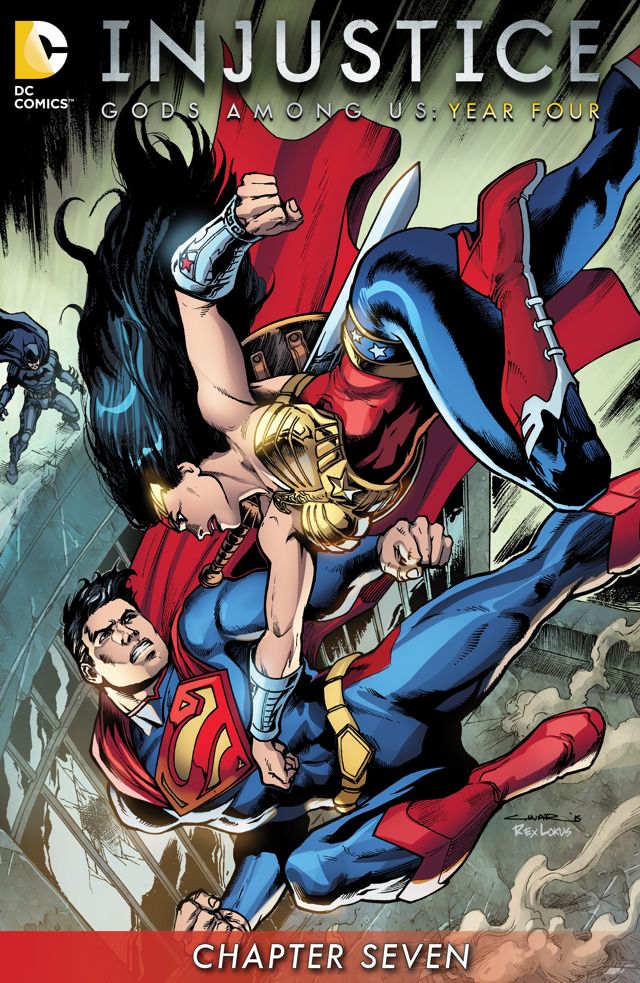 Click to enlarge
Three days prior, Lex Luthor laments the loss of Lois Lane and the duplicitous nature of his relationship with Regime Superman. The Batman contacts him regarding Ares' offer of assistance. Luthor advises what the Batman already knows, which leads to Batman closing the deal with Ares, promising to handle Ares' main concern, Wonder Woman. The story resumes where it left off last issue, with a stand-off between the Amazons and the Justice League. Wonder Woman offers that the matter be settled in single combat, and Superman designates himself as the champion of the League. The Batman announces that Wonder Woman will be the champion for the Amazons, much to the slack-jawed surprise of the League.

Story - 2: If the gods are mad, the super-powered heroes are just stupid. Really, really, stupid. This scenario is ridiculous. Just kill Batman. Story over. Kill him. A quick blast of heat vision that moves at light-speed by the way, and fry his brain through the eyes. Yellow Lantern, use that ring of yours, which moves at the speed of thought, and crush him to a pancake. Cyborg, let loose an EMP and fry his tech, then fire one of your gadgets at him and kill him. Flash, speed over there and vibrate him to death. Wonder Woman, use that speed Hermes lends you, zip over with that sword of yours and turn him to Bat-chops. It's ludicrous that all of these other characters can die in the most cheaply done ways, but the League is going to just stare at the Batman. Kill him. No, better yet, just be stupid. We still have a year and some months to go. Play along with Batman's plan, fight how he wants you to fight, do what he wants you to do, and then, of course, it will be that Batman planned it all, and not that the lot of you were dumber than rocks on MDMA. How can anyone read this and plausibly believe that the contest between the League and the Insurgency is one that shouldn't have ended some time ago? One swift movement from nearly any Leaguer ends this farce, but while Wonder Woman will crush another's skull and Regime Superman will off a defenseless Green Arrow, Batman, the literal thorn in the side, no one will even attempt a strike on him. Not one scene of someone trying their best to kill him, just this carousel of inanity.

The idea that a man can strive with the gods is one from classical mythology, only those stories were couched in one cemented meme: man always loses to the gods. The gods are a part of nature, they control nature, and as mankind is also part of nature, to endeavor against them is a foolish gambit. Rather than really challenge this idea of mortals contesting the gods, and its all but certain conclusion, stories now simply elevate mortals to godly stature, as has been done with Batman, eliminating the need to struggle at all. He's immortal, untouchable, and despite Year One, unbreakable. The subtraction of his actual mortality, while pushing that he's just a very determined man, is a reminder of just how much has been lost with the character, and how ultimately unentertaining he has become.

Art - 4: A solid issue of illustration.

Cover Art - 4: I've seen more images of Superman and Wonder Woman fighting in the last two years than in 20. Nice one, though.