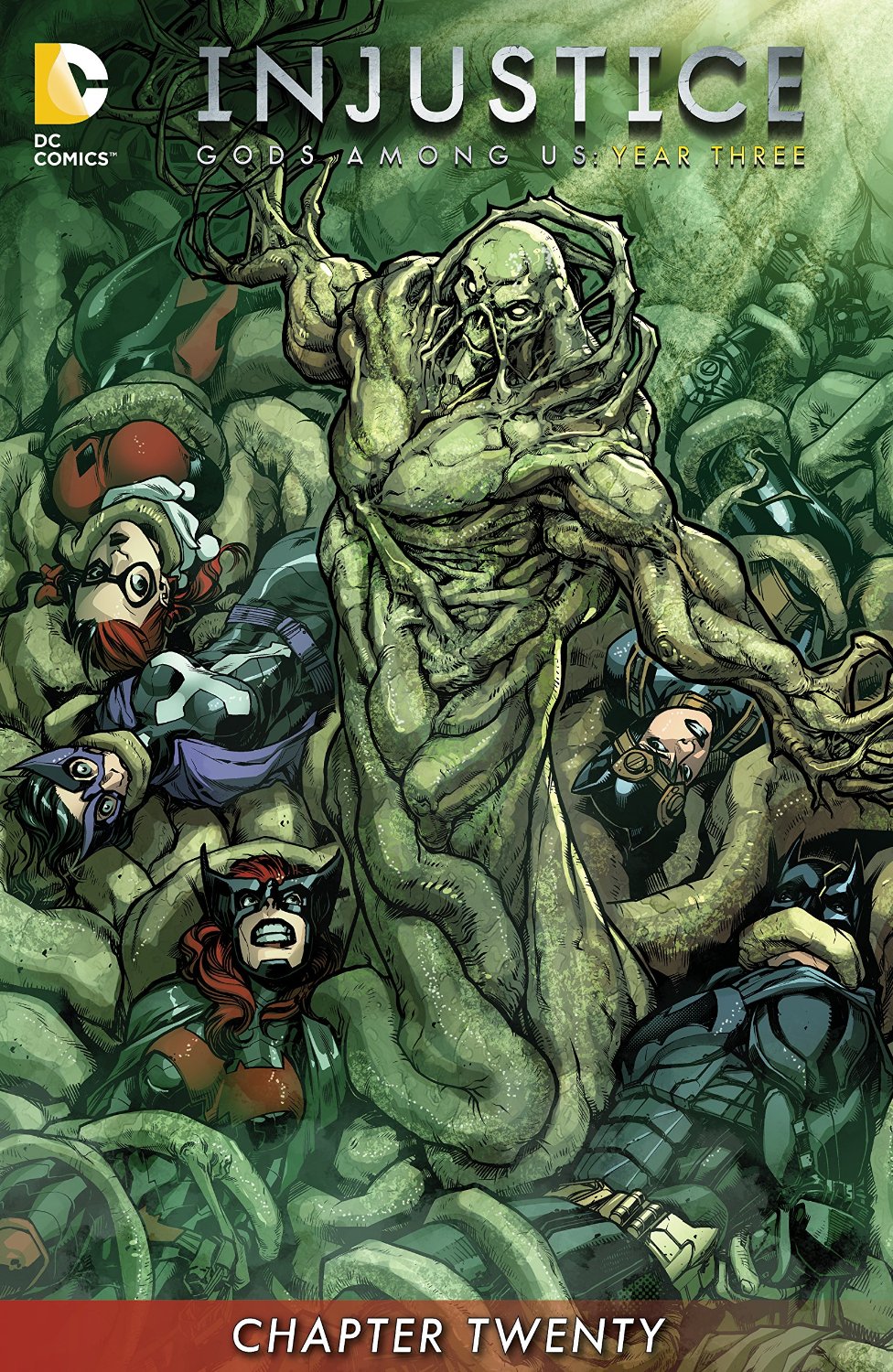 Click to enlarge
Trigon and Mxyzptlk continue their battle, while the Insurgency looks on from the tendrils of Swamp Thing. The super-pills have afforded the Insurgency enough strength to free themselves from Swamp Thing, while Regime Superman and the Batman engage in combat. The groups pair off, with the League edging out the Insurgency. Regime and Batman's fight is brought to a close by Captain Marvel knocking Batman out, leaving the League with the advantage, as the Insurgency's leader is down, and only two remain standing.

Story - 2: An exceptionally poor installment, this week's Injustice brings what the discerning reader had probably realized some time ago: there is no story here and yet, more issues are to come. The plodding and padding of the sequences is absurd at this point, as it's obvious that a certain number of issues must occur in a single year of Injustice, regardless of whether or not they are needed or merited. How long can a fight between Trigon and Mxyzptlk continue, what has become of the Spectre, how long do the super-pills last, how could the Insurgency escape from Swamp Thing, why isn's Batman dead? These questions swirl around the epicenter of this mess, with the realization that they won't be sufficiently answered. They cannot be. A cogent answer for any of them reduces the issue to less than birdcage liner, and there are still two more years to go. However, how long can Injustice continue without a basic centre or a solid core? The book is moving strictly on the inertia generated from a false start out of the gate, and an obliviousness to the fact that it has done so.

We now have the reverse of the scenario which has always benefited the Batman in the question of who would win in a fight. Regime Superman is willing to do anything to defeat Batman, while Batman desperately clings to his humanity, unwilling to sink to Regime's level. Why, pray-tell, is Batman still alive? Year One offered little explanation as to why Batman was broken instead of slain, and now, in Year Three, as the two contend with each other once more, it is painfully obvious that there should be no fight at this point. Batman should be dead. When he's knocked unconscious by Captain Marvel, why doesn't Regime snap his neck and end the mess right then and there? Wonder Woman's inserted influence and judgement? Again, Regime is willing to do what it takes to win; Wonder Woman shouldn't be a factor in that decision making process, and it's become pathetic that for all his bellowing, Regime Superman is still unwilling to do what is necessary to ensure his regime, and the safety of the world as he sees it, when it comes to Batman.

Art - 2: The line-work matches the pedestrian story, and bears an unfinished, secondary look.