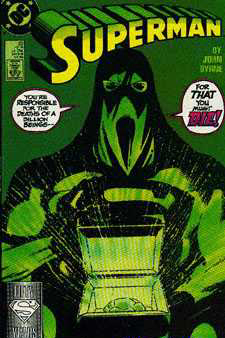 Quite literally, the radioactive remains of Krypton. Kryptonite is the ore form of the super actinide kryptonium, a transuranic element, possibly having an atomic number of 126. Humans exposed to kryptonite receive 75 rems of radiation per hour. Formed by increasing internal pressures in the planet Krypton that led to the planet's explosive death, Kryptonite radiation is deadly to Superman poisoning the bloodstream and causing intense pain and loss of his superpowers, and likely death if exposed for several hours.

A small two-pound fragment was lodged in the rocket that carried Clark to Earth. This piece was found by Professor Vale and used as a power source for Metallo. Lex Luthor obtained this fragment and used a piece as a ring gemstone, and also made the bullets that the first Bloodsport used against Superman. Luthor was unable to synthesize any more kryptonite and his remaining sample was destroyed by a nuclear accident. The kryptonite bullets are stored in a container in the tesseract Fortress of Solitude.

A former LexCorp security chief, Chuck Graham, attacked Superman as Kill Fee with a few grams of kryptonite he had stolen from LexCorp. The kryptonite ring's stone's radiation eventually destroyed Luthor's hand and made him terminally ill. Superman obtained the ring and entrusted it to Batman. However, with some legal double-dealing, Lex Luthor was able to steal it (SUP #126). He replaced the ring with a fake, and it was returned to Batman.

Luthor once used a synthetic red kryptonite on Superman, supplied by Mr. Mxyzptlk, that caused Superman to lose his powers temporarily. This form of kryptonite, backed by Mxyzptlk's 5th Dimensional magic only had the power Mxyzptlk allowed it to have and only if Luthor did not tell Superman where it came from. Luthor unwittingly erred when he told Clark Kent how he was able to remove Superman's powers, thus breaking the deal with the imp.

For as scarce as Kryptonite is, many of Superman's enemies have been able to acquire some now and again to harass the Man of Steel. The Cyborg attacked Superman with kryptonite radiation created in Engine City. The heart of that technological terror was powered by the kryptonite radiation. His mother's exposure to Superman's Kryptonian rocket as it blazed overhead in Kansas on that fateful night when the Kent's located Kal-El, somehow imbued Mrs. Braverman's child, Kenny with the ability to emit a form of kryptonite radiation. This ability went unrealized until Kenny was well into maturity and had several surgical alterations in top-secret government laboratories. From these alterations was borne the villain, Conduit.

Luthor dabbled with synthetic Kryptonite. He allowed the Department of Extranormal Operations to get their hands on some of his yield and test Superman. DEO agents and the villain Crazytop attempted to test it on Superman. So far it has only harmed Superman for a few seconds before "shorting out" (ACT #750-751). He again revisited his work when Superman became a world-wide dictator under Dominus' influence. This attempt by Luthor was unsuccessful in killing Superman, but his work and his tower that Superman threw into space came crashing down on the Fortress in the Antarctic destroying it.

As part of someone's treacherous planning, Superman was infected with an ingenious form of Kryptonite Poisoning, nearly resulting in his death. A woman commonly known as La Encantadora was marketing Kryptonite on the open market around the world and having every world power and common criminal biting at her heels to bid on a chunk of the only material known to have an effect on the Man of Steel. Using her vast mystical powers of suggestion, she had everyone believing that each piece was the genuine article until the test against Big Blue (ACT #760). She was found to be fraudulent soon enough, but during her apprehension she kissed Superman, that kiss nearly led to his demise. She had injected into him a microscopic nanobot of unknown design that was taking a miniscule particle of Kryptonite and attacking each cell in Superman's body individually. With the help of Ray Palmer, The Atom and Team Superman, he was able to overcome the poisoning, but the master behind the plan was never fully determined.

Recently Superman and Batman had a very public disagreement about the rights of Lex Luthor, as President of the United States. Through a heated battle within the White House itself, Superman and Batman argued over the legal and moral obligations they both had to uphold the law for the world and how Luthor, while elected by the people of the United States should not control this ultimate power over Superman with the Kryptonite Ring. Through a variety of play-acting and slight of hand on the part of Batman and Superman, they re-took possession of the ring from Luthor while still maintaining that in Luthor's eyes he still had the genuine article. The ring is now safe in Batman's care where it will only be called upon if ultimately necessary.

Batman created a red kryptonite variety that makes Kryptonian's skin transparent, while not effecting humans. This caused Superman's powers to increase to the point where he couldn't control them due to the unfiltered rays of our yellow sun going straight into him. Ra's Al Ghul duplicated this in the "Tower of Babel" story line in the JLA comic book.

Recently, with the arrival of Kara, the new Supergirl, massive quantities of new Kryptonite came to the Earth. A whole rainbow of colors landed across the Earth, most of which the JLA collected, but much of which has managed to go awry, including a hundred pounds in the hands of the new Red Hood, Jason Todd, and with some in the hands of the Checkmate organization.

What these new colors do in this continuity is not yet known, but it is certain that with the scarcity of kryptonite challenges, the new availability of the stones means a certain challenge for Superman.

Since John Byrne's redesign of the Superman mythos (in 1986), only Green Kryptonite has been used (so far) as the authentic radioactive remains of Krypton. There was a time when Mxyzptlk made Red Kryptonite for Lex Luthor during one of his many 'games' he plays with Superman. This Kryptonite, based on 5th Dimensional magic, only had power if Lex did not tell Superman where he had gotten it.