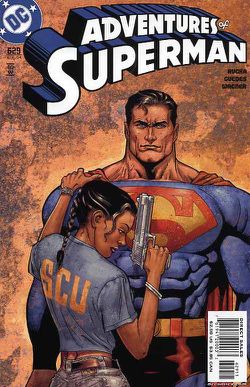 One of the newest leaders of the Metropolis Special Crimes Unit, Lt. Leocadio-Escudero arrived in Metropolis ready for action. Immediately on the scene, she assisted the police in defeating and detaining the Masters of Disaster. Strong-willed and domineering, The Wolf - as she is called - has manipulated Superman into a handful of one-on-one encounters. Understanding his status as one of Metropolis' leading protectors, she has made it clear that she wants the Man of Steel "in check" and answerable to her.

In action, Lt. Escudero is seemingly a careless diehard, throwing herself in harm's way. But this is apparently due to her background. As a child in Madrid, Spain her parents were killed in a terrorist bombing. She and her brother were severely injured, but this led young Lupe Teresa to become a law enforcer. In time, she honed her skills by joining some of the leading counter terrorist organizations around the world. Now in Metropolis, Lupe wishes to put a new face on the city's law - that of a fearless crusader, never waiting for Superman to establish justice. Time will tell if Lt. Lupe Teresa Leocadio-Escudero can truly become a legend of Metropolis.

After Ruin killed some of her men, she became insanely driven to take him down.