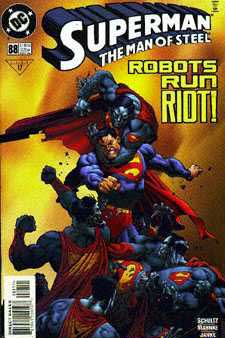 During the period where Superman (under the control of Dominus) felt he must police the entire earth, 24 hours a day, 7 days a week. He felt it necessary to build an army of Superman Robots (created in his own image, all wearing the famous "S" shield but wearing variations of the Red, Blue and Yellow costume). The Superman Robots were also given a small degree of sentience, making each one an autonomous agent of the Man of Steel. There job: To protect mankind (agressively if necessary) attending to crises beyond Superman's reach. The Superman Robots' powers included Super-Strength, Flight and Heat Vision, but were inferior to Superman's own powers. Once Dominus has been defeated, Superman had most of the Robots destroyed. One particular Robot (programmed to protect Lois) was particularly difficult to get rid of.

After Krypto almost killed Mongul, Superman realised that he was too dangerous to have around and so confined him to the Fortress of Solitude, where one robot is currently employed as Krypto's caretaker. The robot is programmed to give off Superman's scent every now and again to keep Krypto happy (SUP #170).