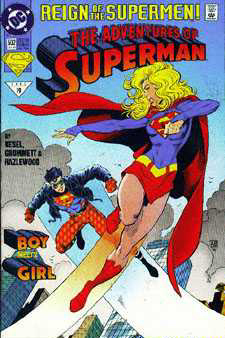 (Matrix) - An individual known as the Time Trapper once created a "pocket" universe where an alternate set of the planets Krypton and Earth existed. In that universe's timeline Clark Kent began his superhero career as a youth called Superboy. Unfortunately in that universe Superboy disappeared into the future and died saving the lives of the Legion of Super-Heroes. When a set of Kryptonian villains escaped they used their super powers to lay waste to the universe's Earth. Hoping to stop these villains, the heroic Lex Luthor of that universe created out of proto-matter and modeled from the genetic code of that Earth's Lana Lang an individual who was given a costume based on Superboy's. When she and Luthor were unable to stop the Kryptonian criminals, Supergirl was sent to Superman's universe to get his help. Superman, Luthor, and Supergirl tried to stop the criminals, but the criminals nearly killed Supergirl, and killed everyone on the Earth. Believing no other alternative existed Superman ended up killing the criminals to prevent them invading Superman's universe. After killing them, Superman took the injured Supergirl to heal and live with Ma and Pa Kent. At the Kent farm, she was known as Matrix. When Superman felt he needed to exile himself in space, Matrix interpreted that to mean she should use her body changing abilities to replace Superman in Metropolis. When Superman returned to Earth with the Eradicator, the Eradicator caused Matrix to believe she was Superman. Superman had to battle Matrix in her doppleganger form. Deciding she was a risk to Superman and the Kents, Matrix decided to explore space, but she later returned to Earth to help Superman defeat Brainiac when Brainiac brought Warworld to attack Earth. After Lex Luthor II appeared, Supergirl returned to Earth and became attracted to him and worked with him and Team Luthor until discovering Luthor planned to clone her. Supergirl worked with the superhero team the Titans. Later she bonded her protomatter body with the dying body of Linda Danvers.

Supergirl has had shapechanging powers, psychokinetic powers that let her fly, send out blasts, and protect herself with a force field, but her bonding with Linda Danvers has altered her powers. Supergirl is an earth-born angel.

An alternate reality Supergirl (the pre-Crisis Kryptonian Supergirl) somehow came to earth, and stayed with Linda Danvers. Not wanting any harm to come to her new friend, Linda took her place when reality tried to set things right, and Linda found herself living a new life, Kara's life, where she became a mother and lived a full and enjoyable life... However, reality again needed to be set right, and Linda was returned to her normal life, having to leave behind the new life she'd experienced. After these heart-breaking events, Linda decided to hang up her cape, and retire from being Supergirl... opening the way (later) for the real Supergirl, Kara Zor-El, (Superman's cousing) to take the mantle (see entry for "Supergirl - Kara Zor-El").